With the second season of From Dusk Till Dawn: The Series premiering this Saturday (June 6) on El Rey, we have a first look at what’s to come, via Bloody Disgusting. The show is a sequel / continuation of the classic film by Robert Rodriguez that starred George Clooney, Harvey Keitel, Juliette Lewis, Quentin Tarantino, Danny Trejo, and Salma Hayek. It introduces extra characters while expanding on the franchise’s mythology.

Here’s that picture from the upcoming season, which features D.J. Cotrona as Seth Gecko (George Clooney in the film) and Madison Davenport as Kate Fuller (Juliette Lewis in the film). 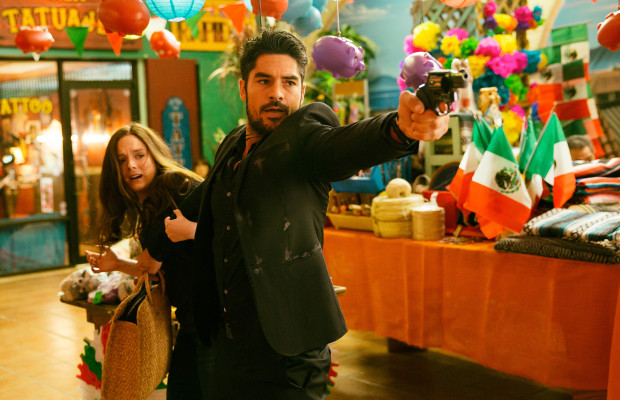 Season Two explores a new chapter in this supernatural crime saga that travels from Mexico to the edgy, tricked-out Texas of Robert Rodriguez. It also deepens and complicates the core relationships between the characters, while adding new faces and new dynamics. Season Two begins with our characters in their separate worlds – Santanico (Eiza Gonzalez) and Richie (Zane Holtz) are outside Houston, living like Bonnie and Clyde; Seth (Cotrona) and Kate (Davenport) are scraping by South of the Border; and Freddie Gonzalez (Jessie Garcia) is protecting his wife and young daughter in a Houston suburb.  And Carlos Madrigal (Wilmer Valderrama) and Scott Fuller (Brandon Soo-Hoo) emerge from the Titty Twister, changed men. They will all come together once again – this time facing off against an even bigger threat.
“From Dusk Till Dawn: The Series” is a Miramax production in association with Rodriguez International Pictures, FactoryMade Ventures, and Sugarcane Entertainment.  Executive producers are Robert Rodriguez, Carlos Coto (also showrunner), Diego Gutierrez (also writer), FactoryMade Ventures and El Rey Network co-founders John Fogelman and Cristina Patwa, and Miramax’s Zanne Devine and Daniel Pipski.