A disappointing lack of mind-blowingness here.

Nowadays, thanks to the Internet, pretty much everyone is familiar with the iconic image from David Cronenberg’s Scanners, even if they don’t know where it’s from. The animated gif of a man’s head exploding is the standard reaction image response to anything that blows one’s mind. I’m disappointed to say, however, that the movie itself had no such effect on me. To describe the experience succinctly, it’s like watching a very long episode of The X-Files, without Mulder and Scully’s dynamic to maintain interest.

A quick recap: a “scanner” is a telepath, someone who can create a link between their own mind and someone else’s, allowing them to read thoughts and control actions. In order to fight an underground conspiracy of scanners headed by Darryl Revok, an exceptionally powerful scanner, a security firm recruits a scanner Revok hasn’t gotten to: Cameron Vale. The plot unfolds pretty much exactly like your standard 70’s political thriller. Vale tries to track down Revok while Revok sends assassins after him. Vale eventually uncovers a conspiracy involving Revok secretly controlling ConSec resources in order to raise an army of scanners that will rule the world.

The biggest problem with Scanners is a similar problem to conventional political thrillers, which is that there’s no emotional connection to the hero. Vale is literally a blank slate. He has no memory of his past. Dr. Ruth (the ConSec scientist who trains him) posits that he’s had no opportunity to develop his own identity because he’s been tortured by the voices of other people in his head. That’s an interesting idea, but it makes Vale difficult to relate to (which is something that’s enhanced by Stephen Lack’s wooden performance). He also doesn’t have a compelling reason to pursue Revok. He’s convinced (or possibly brainwashed) by Dr. Ruth to do it, which means his goal is essentially Ruth’s, not his own. Though, to be fair, he does start to develop his own agenda about two thirds into the film. 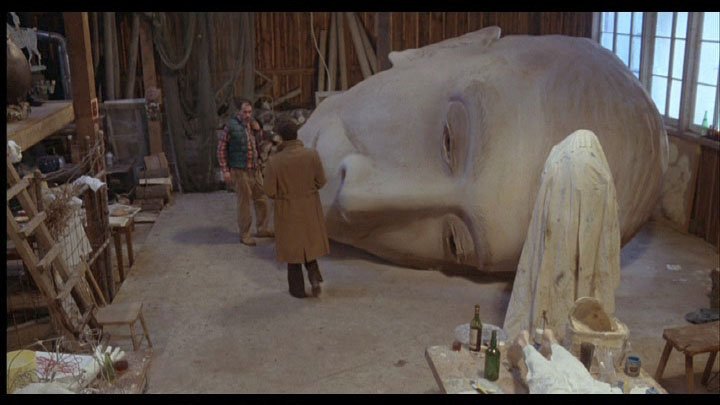 The lack of emotional connection to the main character might have worked if the secondary characters stole the spotlight, but this is not the case. There’s really no pathos here at all. That feels wrong in a movie that’s about vulnerability and inner life, and whose climax involves a personal, familial revelation.

There are some other problems to, namely the cheesy and overly expositional dialogue. It’s tempting to call the scanning scenes a problem as well, but to be honest, the sequences of distorted expressions are just as entertaining as they are ridiculous. It’s too long and slow-paced. And it’s impossible not to mention the silliness of a scene that involves a computer that Vale was scanning through a telephone line self-destructing, causing far too many explosions than is warranted.

Don’t get me wrong, this is by no means a terrible movie. There’s plenty of redeemable things to find here, especially visually. As I mentioned, the head-exploding scene is an iconic one that you won’t forget until the day your own head explodes (or something), and the other effects caused by scanning are often interesting as well. There’s a chase scene involving an escalator in the very first sequence that’s fun to watch, as well as a scene in an artist’s studio that, while on the nose, delivers some evocative art to look at it (and incorporate into the action). And Michael Ironside is menacing as Revok.

Ultimately, though, if you’re looking for a good Cronenberg movie, this should not be first on the list. Try The Fly, Dead Ringers, or Videodrome first.