A common horror trope that says a lot about the genre.

I’m interested in one of the most widespread horror tropes, a very specific scene called the “mirror scare”. Why is it so common, and what does it mean?

You should know what I’m talking about. In the standard mirror scare, a character stands in front of their reflection at a bathroom sink, opens the medicine cabinet, and when they close it, someone or something is behind them. There are variations on it – sometimes the character is just imagining it, or the reflection doesn’t match reality, or it’s used with a different reflector, such as a TV screen.

Here’s an excellent supercut that illustrates the trope nicely:

So, especially after watching so many in a row, what can we take away from this?

First of all, I think it’s worth noting that most of these aren’t creepy. They’re mostly jump scares, there to surprise us more than anything. And to that end, half of the work is accomplished by the sudden blast of music, not the drama or horror of the situation. This is an effective and simple setup for the jump scare, too, which is probably a major contributor to the scene’s popularity.

Second of all, I think it’s interesting to note the way the scene progresses within the supercut. Sometimes it’s played straight, but later on, the films clearly assume a more savvy audience. Since the scene is so common, they assume the audience expects a mirror scary the minute a character stands in front of a cabinet. So the music builds tension, but then nothing happens. Or the filmmakers play a double blind: we think nothing will happen, but it’s a trick. The moment we breathe a sigh of relief, something unnatural happens in the mirror. 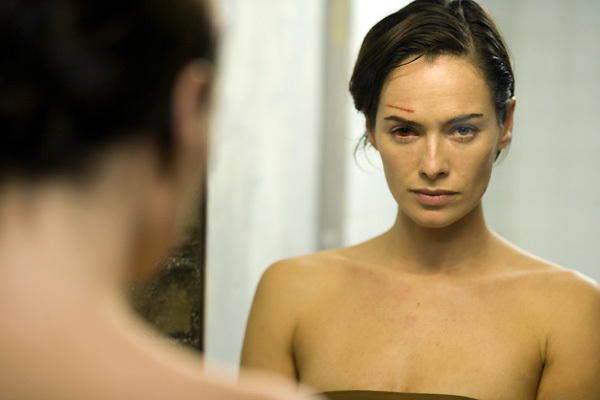 It’s also impossible not to at least mention that the character in front of the mirror is almost always a woman. Why is this? I think it’s probably a complex combination of factors that says a lot of things about the horror genre, but that could probably fill a whole other article, so I won’t go into it here.

So why are these scenes so common? I think there are two reasons. First, the mirror is a powerful symbol. It can represent truth, because it might show characters things they couldn’t otherwise see. This is an important device in stories with ambiguity, such as ghost stories. The second reason is that the bathroom is a vulnerable setting. These are intimate moments where characters let their guard down – and that’s exactly when horror loves to strike.

The last possible reason I can think of might seem like a stretch, but bear with me. Maybe, at least some of the time, it’s a metaphor for making horror films? In this case, the mirror parallels the camera itself – after all, a camera lens is itself essentially a mirror.

In cases where the mirror shows something other than what is in front of it, it becomes more than a reflection. It becomes a portal to another world, a kind of spirit world or hell. A place that embodies the fear itself. And after all, isn’t that what a horror movie is?