If you’ve ever watched a horror movie, you might want to sit down for this…

So get this, The Upcoming film Death House, which is being penned by Jay Black, Gunnar Hansen, Brian Herzlinger, and Harrison Smith (with Smith and Herzlinger directing) is aiming to make a horror re-union. I don’t know if I’d spike the punch at this one though, things could get a little…dicey (sorry, I couldn’t help myself).

The Four Horsemen are the most notorious serial killers of all time. Robert Englund’s weapon of choice is fire; Gunnar Hansen has an unquenchable thirst for human flesh; Bill Moseley is a surgeon, and tends to focus on mutilation and torture; and Doug Bradley shares a bond with spiders, particularly the Brown Recluse Spider, whose poison Bradley is happy to dispense among those unfortunate enough to meet him. All four killers are safely housed in a maximum security wing in the basement of the infamous Dodhoff Prison, aka THE DEATH HOUSE. The newest inmate to the prison is Sid Haig, a Hitler-wannabe with a cult following, whose right-hand man Jeff is almost as sadistic as him. Also arriving at the prison is a college field trip, led by Professor Dee Wallace. She brings her Psychology class every year to observe, from a safe distance of course, the four horsemen in their prison habitat. The students include Anna, a no-nonsense passionate student; Nick, who’s taking the class for a glorified credit,; Harold, the geek who could have majored in anything and been successful,; and Suzie, the slut of the group. Michael, the Professor’s Assistant, keeps everything on track for Wallace. During the tour of the prison by Warden Danny Trejo, Jeff and the cultists invade, staging a prison break to free their god-like leader- and they are shooting to kill. The assault is successful, as they free Sid, but the Warden, locks down the prison to keep Sid from escaping, and contain the prison break. The warden directs the students down a back passage to the boiler room to save their lives. Unfortunately, that is the Warden’s last move, as he is gunned down by the infiltrating mob. Anna hits the button to release the four horsemen from their cells, knowing they are the only option to take down the mob, and save their own lives in the process. But blood is universal, and soon the students find themselves navigating a brutal and gruesome labyrinth to survive, as the Four Horsemen, in their quest for freedom, unleash holy hell.

Death House is shooting for an October 2oth release date. 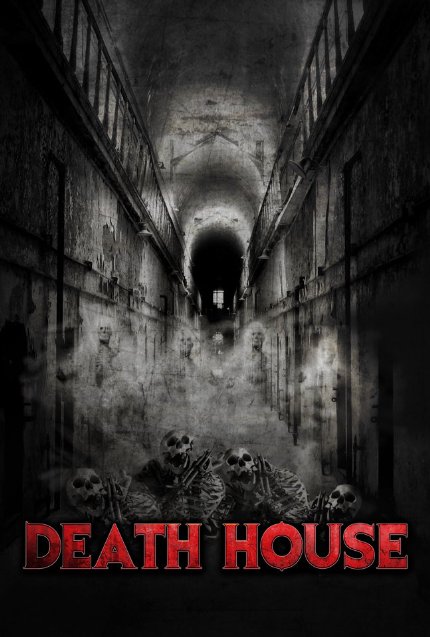