Thanks to EW, we now have our first official still of the Ash vs. Evil Dead Starz series, which features the return of Bruce Campbell to Sam Raimi’s Evil Dead franchise! Check out the photo below.

The first season will consist of 10 half-hour episodes and is executive-produced by Campbell, Craig DiGregorio, Sam Raimi, Rob Tapert, with DiGregorio as showrunner. The show is currently in production in New Zealand.

[Ash is] the guy who yet again is accidently responsible for unleashing the evil dead back upon the world. “He’s the only one stupid enough to really tamper with those spirits,” Sam Raimi, who directed the first episode of the new series, tells EW. “And he does. But he’s also still a really good monster fighter. So, he’s also going to be kicking some deadite buttocks, if you’ll pardon the French.”

“It’s The Searchers with carnage and mayhem,” adds Campbell of the newest chapter in the Evil Dead saga. “I’m relegated a little bit into the John Wayne mode these days with my team—the young, virile, evil fighters who will pair up with Ash and take on this nemesis: this never ending, ever evolving nemesis.”

The photo features Ash with his chainsaw and two sidekicks (Ray Santiago and Dana Delorenzo), who are employees at the Value Stop where Ash, who is still a stock boy, works. 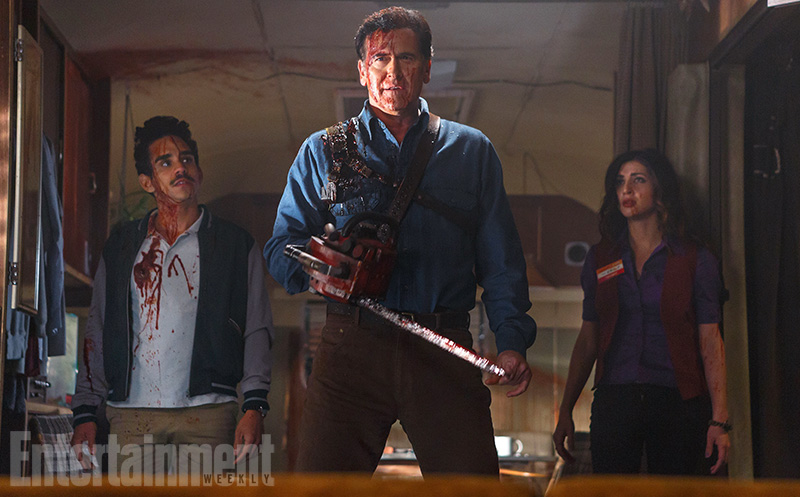