HFC catches up with the modern King of Horror.

Jason Blum, head of Blumhouse Productions, has been behind some of the most successful horror films of recent times. With direct input into films such as the Paranormal Activity franchise and Insidious, Horror Film Central caught up with the producer mogul to discuss how he has achieved his climb to the top. His latest film, The Gallows, is set to release this month. Below is the interview. 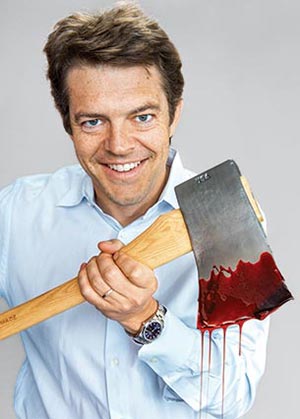 Thanks for speaking with us today. You’ve been the driving force behind some of the most profitable films in history. Can you tell us a bit about your background and how you got to Blumhouse Productions?

Jason Blum: I worked in independent films for the first 15 years of my career. Then I worked for Miramax and then I quit and started my own company. I did a bunch of independent movies that nobody ever saw. Eventually I did a movie called ‘The Tooth Fairy’ which a lot of people saw, but I struggled to make a big budget movie. I wasn’t used to that. Then ‘Paranormal Activity’ came out and it was a mix of an independently made movie released by a studio, and that seemed like a great combination to me and that’ what the movie-side of Blumhouse is: we make independent movies that often get studio releases.

I’ve noticed that a lot of your films are in the horror genre – where did your love for the genre come from?

JB: I always loved scary stuff when I was a kid. I took a great class in collage on [Alfred] Hitchcock – I really loved his movies. Halloween was always my favorite holiday, too. I never really tried to narrate that in movies, it really took Paranormal Activity to make that happen. But once I found it, I never left. My intention is to occasionally branch out and do other things, but right now my intention is to keep doing scary stuff.

When speaking to Travis Cluff and Chris Lofing [Writers/directors of The Gallows], they said when working with you, you allowed them a lot of creative freedom and control. As a producer, where does your instinct to trust filmmakers come from?

JB: First of all, I thought they made a really good movie without our help. We saw the movie as a rough cut and we weren’t involved at all in that, so we knew they were really good at what they did. It is always hard – we do give our point of view to filmmakers, but we tell them that it’s their choice to take our advice. That doesn’t mean that we don’t push them hard to do it, but we make low budget movies. When you make low budget movies you can take those creative risks. Even if the filmmaker is doing something that I really disagree with, it’s not as though we have $100 million on the line. So, I let him or her do it. It’s a good system.

How important is it to build a franchise these days? We have the final instalment of Paranormal Activity coming out, we have multiple chapters of Insidious. Is this something you consider when making original content?

JB: I really actually do the opposite. It’s what I learnt on Paranormal [Activity], which no one ever thought we could make a sequel to it. It’s very important that when you make an original movie, is to try and make that movie as great as it can be, and not think about where the sequel would go. If you’re lucky enough that it resonates with an audience, you can think about a sequel at that time, but I really think if you try and make a low-budget movie, and try and make it into a sequel, you’re going to cause more problems than you’re going to solve. That’s my experience, anyway. It’s not very Hollywood thinking.

Why is now the right time to end the Paranormal franchise?

JB: I feel like we kept teasing and teasing, and I really feel like the last one (which was technically Paranormal Activity 4), we had to give the mythology away. I felt like people were tired of being teased with information and really want to know about the mythology. And I was psyched that this is the last one. And it’s not like we waited for the film to open and see if it made money. No matter what, this is the last one – which is very freeing, creatively. I feel it made for a better movie. To go out and be confident, not with your head sunk down. Paramount Pictures wasn’t against the idea, either. They were open to it, which was great.

You’ve worked in film and TV in the past. What are the main differences between the two?

What was the experience like of working on the critically acclaimed The Jinx?

JB: It was awesome, I really loved the show. Andrew [Jarecki, director of The Jinx] and I are friends, and I actually saw it in a more, not totally completed state. I had a similar role on The Jinx as I had on The Gallows, which was to take this thing that was really interesting and terrific, and figure out how to get it out into the world. It was a great experience for the company and me and I’m really proud of what Andrew and Marc [Smerling, writer] did with the show.

So what’s next for Blumhouse?

JB: We have The Gift with Jason Bateman and then M. Night Shyamalan’s movie called ‘The Visit‘ in September. Then we have Eli Roth’s ‘The Green Inferno‘ and finally the last Paranormal Activity. That’s it for this year, which is a lot!