My mind was blown Scanners-style when the trailer for Ash Vs. Evil Dead was released a few days ago. It’s simply too beautiful a thing to withstand. The show looks like everything we could have hoped for, blending all the elements of the original movies that we all love so much. It’s got gore galore, the Necronomicon, Deadites that are a return to the original look, and of course, Bruce Campbell himself as the same old Ash, who’s even still a stockboy. And since it does star Ash, it throws in plenty of references and call-backs to the original trilogy as well.

Obviously, I’m still here to tell the tale, because my head reformed shortly afterward. So while I still have use of my brain, why not put it to good use, and take a look at some of those references.

But first, let’s take a look at that trailer:

1. The “evil force flying through the woods” shot

You know what I’m talking about even if you just watched this trailer, because it’s in it several times. It’s pretty much expected in the franchise. The original shot is there as a flashback, and it looks like there are recreated shots in the show as well (such as during Ray’s voiceover about his shaman-uncle, and the moment when the evil rams into Ash’s trailer).

An iconic weapon in its own right, Ash’s boom stick is back both in name and form. Presumably, it still won’t ever run out of ammunition, either.

The chainsaw is also back, and will presumably be put to good use. I wonder if Ash wears it to work? I wouldn’t put it past him, honestly. There’s also the shot near the beginning of the trailer where Ash straps on his corset/girdle-thing.

I would argue the broken bottle stabbing shots are equally in the spirit of the chainsaw in their bloody inefficiency.

“Yo, She-Bitch, let’s go” vs. “Yo, gramma, let’s go.” But Ash isn’t just regurgitating the same old lines. We always have, “The other first thing I gotta do is some cardio, because my heart is jackhammerin’ like a quarterback on prom night.”

There’s also a reference to the same scene in Army of Darkness, where Ash shoots a Deadite over his shoulder with the boom stick. 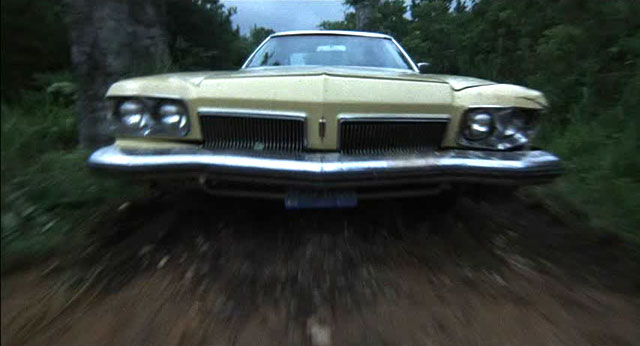 And of course, what would an Evil Dead franchise entry be without Ash’s 1973 Oldsmobile Delta 88? Just like that shot of the evil force flying through the woods, it’s expected. So while I may not be surprised, it’s still exciting as hell to see it in the trailer. This show is really happening, you guys!

I’m guessing that’s not every little reference, though – I’m not perfect! Let me know if I missed anything in the comments.