You can’t make this shit up.

Vengeful spirits, haunted houses, and demonic forces are fun and all, but what about the horror that happens off the silver screen? Below are some true, and truly deranged, stories which would make some terrifying movies:

In 1971, Marybeth Tinning’s children began to die.  At the time, Tinning had three children: Barbara, Joseph, and Jennifer.  Jennifer died when she was eight days old from hemorrhagic meningitis and brain abscesses.  The next year, Tinning rushed Joseph to the hospital, where he died from cardiopulmonary arrest.  A few weeks later, Tinning brought Barbara into the emergency room.  She died the next day, the cause of death said to be Reyes’ Syndrome.  The deaths of her three children were only the start of Tinning’s madness.  She went on to have five more children and even adopted one. Each died of either an undetermined cause, or Sudden Infant Death Syndrome.  According to interviews with her family and friends, Tinning seemed to enjoy the attention she got after each child died, and became irritable when the focus during each funeral was not on her.  It has been speculated that she had severe Munchausen By Proxy Syndrome.

After her ninth, and last, child, Tami Lynne, died, the police decided to (finally) investigate.  An autopsy report concluded that Tami Lynne was smothered to death.  Tinning confessed to the murders of Tami Lynne and two of her other children, saying “I smothered them each with a pillow because I’m not a good mother.” She was arrested and charged with the murder of Tami Lynne.  She was found guilty of murder in the second degree and sentenced to twenty years to life in prison.  She currently resides in Bedford Hills Correctional Facility for Women.

In January of this year, her request for parole was denied for the fifth time since her incarceration, on the grounds that she shows neither insight nor remorse for killing her children. Mary Bell was born to an abusive and unstable mother in 1957 in Newcastle upon Tyne, England.  At the tender age of eleven, she strangled a four-year-old boy named Martin Brown. Bell later taunted his mother by asking to see Martin, and then saying “Oh, I know he’s dead.  I wanted to see him in his coffin.” Two months later, she killed three-year-old Brian Howe, again by strangulation, this time with her friend Norma Joyce Bell (no relation).  Bell later went back and mutilated the child’s corpse.  Between the times of the murders, the two girls left anonymous Jack-The-Ripper-style letters to the police confessing to the murder of Martin Brown.  The letters were dismissed as a prank.  The police later questioned the two girls about Brian Howe. They gave contradicting stories; the exact details of the crime were never determined.  Norma Joyce was acquitted in 1968, but Mary was convicted of manslaughter on the grounds of diminished capacity.

She was released from prison when she was twenty-three and is now, reportedly, a grandmother.

Commonly known as “The Silent Twins”, June and Jennifer Gibbons were born and raised in a Welsh town where they were the only Black girls. Because of their race, they were ostracized, and so to cope, they isolated themselves.  For the majority of their lives, they only spoke to each other in a made up language and were completely silent in public.  They were obsessed with mirroring each others every move.  According to their childhood psychologist, when they went horseback riding, they would even copy the other when one fell from her horse.   When they were teenagers, they started committing crimes together, like arson.  Ironically, they were also obsessed with gaining independence– something they felt they couldn’t do if both were still alive.  They repeatedly tried to murder the other, always forgiving each other for the attempt afterwards.

In 1982 they were arrested for burning down a barn.  They were both diagnosed as psychopaths and sent to the infamous Broadmoor Hospital, where they attempted suicide multiple times.  When they were 29 they agreed that one of them had to die.  When they finally did speak to someone, their biographer Marjorie Wallace, Jennifer informed her of their intentions: “Marjorie, I’m going to die,” Jennifer said, “We’ve decided.”

When they were released from the hospital, Jennifer died of inflammation of the heart, the cause of which remains unknown.   June now lives a completely normal life.

Last year, 12 year old girls Morgan Geyser and Anissa Weier made international news when they lured their best friend into Nicolet National Forest in Waukesha, Wisconsin, where they stabbed her 19 times to show their loyalty and dedication to the Internet meme Slenderman.  They had discovered the character on a Creepy Pasta website and became infatuated with the idea that Slenderman was a real entity.  Geyser filled a notebook with fan art depicting Slenderman, and mutilated her Barbie dolls with Slenderman’s symbol.  They told the police that if they didn’t kill someone, Slenderman would kill their families.  Their interrogation tapes can be found online:

Their victim, Payton Leutner, miraculously survived and has made a full recovery.  The latest reports say that Geyser may have early onset schizophrenia and was found to be incompetent to stand trial.  She is not currently on any medication, which she is happy about.  She said she doesn’t want the voices in her head to go away. 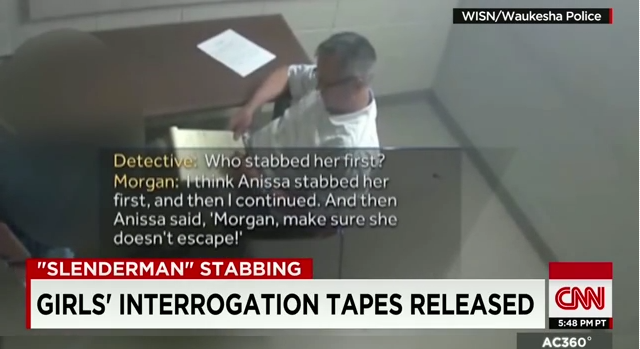