Have you traded and/or lost all of your decent Pokémon cards?  Looking for a fun, new hobby to share with your friends on the playground (or in your office)? Look no further, nerds.  Straight from the imagination of artist Joe Simko, whose other works include Garbage Pail Kids, Wacky Packages, and The Sweet Rot, are the new(ish) Cereal Killers sticker cards! 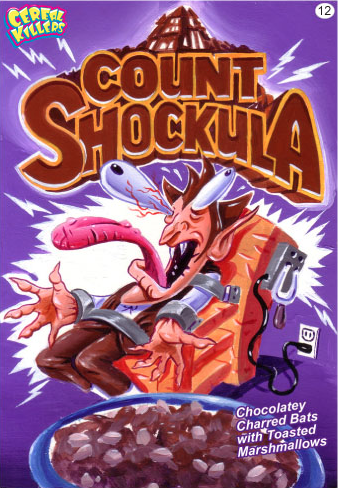 These bloody adorable collectibles are a combination of classic breakfast cereals and popular horror movies from the past three decades.  With titles like “A Bitemore on Oat Street” and “Night of the Krispies Dead,” how could you not be tempted into dipping into your retirement fund (okay, maybe just skimming three or four dollars from your last paycheck)? 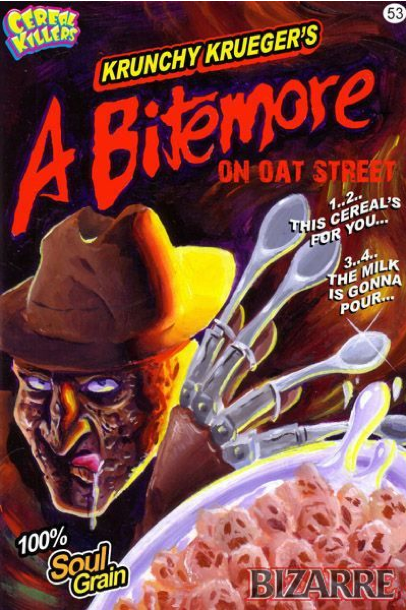 The trading cards are manufactured and distributed by Simko’s company Wax Eye, and can be found on both the Wax Eye website and Amazon, as can a few t-shirts depicting the fictional “Brew Berry,” “Eye Pops,” and “Froot Gloops” cereals.  Other available cards include “Exorcrisp: The Cereal,” made with “crispy crucifixes with possessed marshmallow beds & tongues” and is guaranteed to “turn milk into pea green vomit color!” 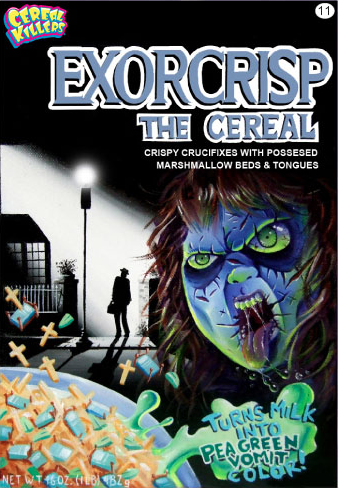 and “Fiber the 13th” which has the tagline “Disembowel Your Bowels.”

According to the Wax Eye website, there are two online forums where fans can arrange to sell, buy, and trade cards with each other, as well as engage in discussions about the trading cards.  So what do you think? Will the Cereal Killers trading cards become the new “it” thing? Or will they die faster than Johnny Depp did in “Nightmare on Elm Street”?