Here’s another story that will keep you up at night. Unlike the Taman Shud Case, it’s a recent story. In fact, it’s an ongoing thing. It’s probably still happening.

This is the story of the feet that keep turning up around the Salish Sea, in British Columbia and Washington. 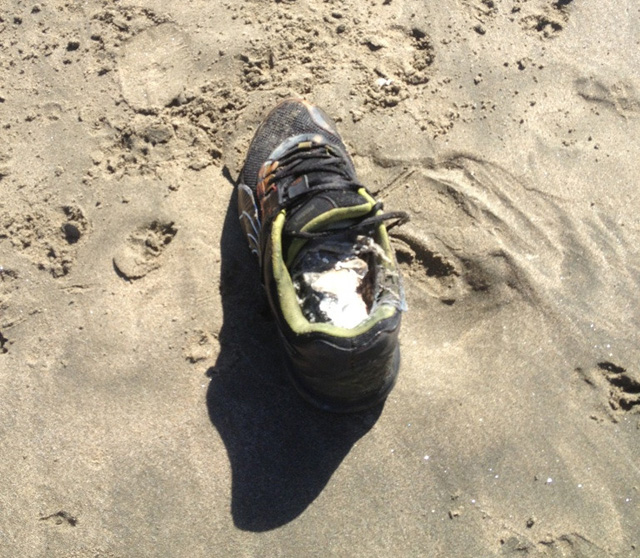 In August of 2007, a girl visiting Jedediah Island found a shoe on the beach. When she opened the sock inside, she found a foot, size 12. It belonged to a man.

A few days later, another foot was found – on a different island, and belonging to a different man. But that could just be a coincidence, right?

But in 2008, five more feet were found. And over the years, feet just kept being discovered washing up on the shores of the Salish Sea. There have been almost a dozen now. Only two of them have been left feet, both of which matched two other right feet. Obviously, each right foot represents a different dead person.

This is one of those cases that are not only bizarre, but defy explanation. Only two of the dead have been identified, both of whom are suspected to have committed suicide. And apparently extremities tend to detach from corpses underwater (since their connections to the body are weaker), but feet and hands and the like rarely float.

And in any case, the suicide theory is not enough to explain why it’s only feet showing up. Why are there no hands, or ears?

Two or three feet might be a coincidence. But eleven feet is beyond the realm of chance. This can only be caused by some outside factor.

There are other theories as to the origin of the feet. Some speculate that they come from victims of the 2004 Asian tsunami. Others say some of the feet may have come from men who died in a nearby plane crash in 2005.

But it’s basically impossible to say. Human bodies can take three decades to decompose in the ocean, and the currents might have carried the feet from almost anywhere.

We really have no satisfactory explanation for this phenomenon. Which leaves us with just two things: more disembodied feet than anyone asked for, and our imagination.