The new horror-themed indie game “Fran Bow” is set to be released August 27th of this year.  According to the game’s creators Natalia Figueroa and and Isak Martinsson, the game is about a little girl named Fran Bow who witnesses her the murder of her parents and becomes institutionalized, losing her only friend– a cat named Mr. Midnight– in the process.  Fran must escape the mental hospital, find her cat, and move in with her Aunt Grace. 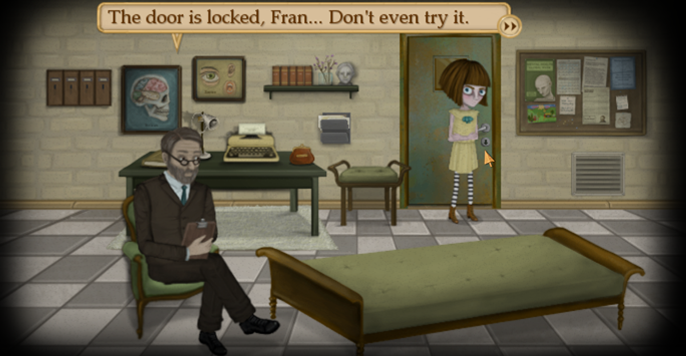 From the screenshot and trailer available on the game’s website, we can see that the game will be in a two-dimensional, cartoonish style, and that the animations are charmingly disturbing.  It’s almost reminiscent of Tim Burton.  The game will feature over 50 interactive characters, an original soundtrack, and even a few mini-games to play while you transition to higher levels.

If you absolutely can’t wait until August to play Fran Bow, Figueroa and Martinsson were kind enough to include a demo version of the game to tide you over.