He’s more than just a clown.

As a Deadpool fan, I feel I have to weigh in on the new trailer. While there’s a lot that it does right, and it’s pretty damn funny, I can’t help but worry about the movie.

See, the thing is, there’s this perception of Deadpool as a funny character. Like he’s basically just a wise-cracking badass in a suit. And while that’s not wrong, in his best comics, he’s so much more than that. He’s a complex, twisted character with an incredibly dark origin story.

The trailer makes it seem like the movie is going to be comedy and action, when it should be closer to a horror-action film with elements of comedy.

If you’re not aware of his origin, here’s a quick summary. Wade Wilson gets a highly invasive, terminal cancer. The Weapon X program (the same program that experimented on Wolverine) recruits him, promising to save his life. And they do, but only after brutal torture and horrific experimentation. He ends up getting a healing factor, which accelerates his cancer and covers his body in scars, but it also makes him effectively immortal.

So his origin story is straight-up body horror. That even comes across in the trailer, but the horror part definitely seems to be played down. In the comics, the process is indistinguishable from torture.

And afterwards, things don’t get much better for Wade. He’s consumed by PTSD and self-hatred, and is frequently suicidal. He has no care for his well-being and uses his healing factor as a weapon, frequently losing body parts or getting impaled in the process of taking his enemies. 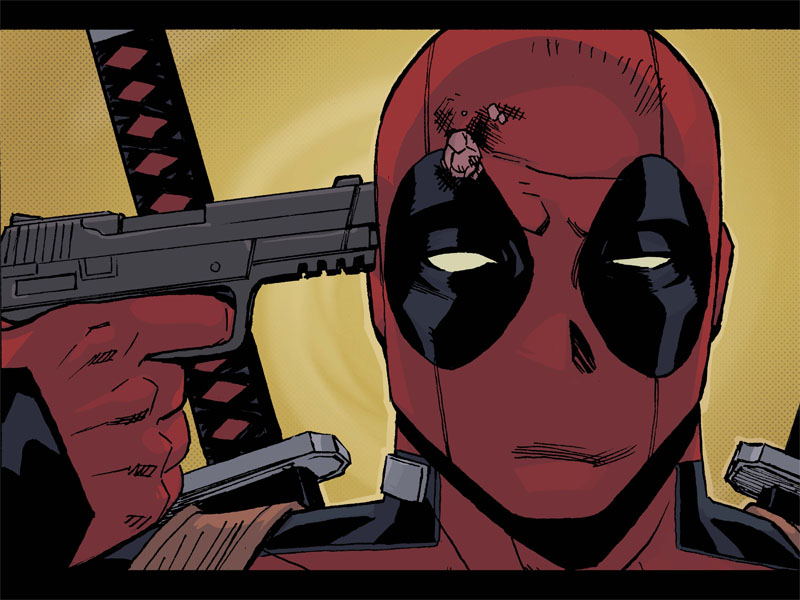 The number of times Deadpool shoots himself in the head is ridiculous.

But more importantly, Deadpool’s story is a Sisyphean tragedy. He has a desire to be a hero, but his own insecurities and inclination to murder inevitably tear him down. He’s almost universally hated, but his worst enemy is himself.

A perfect Deadpool movie would be extremely dark – as dark as possible. And Wade’s constant joking, while present, should be obvious for what it is: a defense mechanism. It should be apparent that if he weren’t laughing, he’d be sobbing.

Deadpool’s emotional state matches his physical one. He covers his despair and self-hatred with a thin, barely-opaque veneer of humor – just as he covers his scars with a clown mask. All that humor and sarcasm is an expression of existential agony.

Wade’s suffering is inescapable because he’s an immortal monster. He has aspirations of heroism, but his own nature makes them unattainable, dooming him to eternal failure. If that doesn’t sound like a punishment in hell, I don’t know what does.

Deadpool is a really fucking dark character. Any movie that does him justice should be much closer to horror than it is to comedy if not pure horror.