Back in 1996, no one would have predicted the cultural phenomenon sparked by a teen horror movie with an ensemble cast of generally unremarkable actors. It just didn’t happen often. I mean, the movie killed off its biggest star (Drew Barrymore) in the first 10 minutes. Extraordinarily quickly, though, Scream changed the landscape and revolutionized the slasher genre as we know it. Scream made over 11 times its budget at the box office, created a new iconic horror villain in Ghostface, and spawned three sequels and a TV show nearly 20 years after the original. Here I rank the films from worst to best.

*This whole post contains spoilers, so if you haven’t seen these and don’t want the plot ruined, you’ve been warned, girl.

I know this is an unpopular opinion given that most people prefer 2 to 3, but hear me out. The franchise, as a whole, is fantastic, and I think this is its weakest link. Its opening scene is strong, as Jada Pinkett-Smith is murdered during a screening of Stab, the movie inspired by the Woodsboro killings we saw in the first film. Audience members watch her fall to her death in front of the theater screen as they think it’s a promotional stunt for the movie. It’s a great scene. Scream 2 is definitely a strong sequel, but I can’t get past the campiness of it (Jerry O’Connell singing David Cassidy in a cafeteria full of people still makes me cringe a bit), and the ending was so over-the-top, that it tainted the rest of the movie for me. I love Laurie Metcalf, but she was trying too hard to be Mrs. Voorhees and it was cheesy. All in all though, it’s fun, and if this is the worst of the series, then the series itself is pretty damn good.

Most fans would consider this to be the weakest installment in the franchise, but I disagree. Sure, it has its faults, but it’s grittier and darker than the first two, if that’s even possible. It has a great cast (Carrie Fisher playing a Carrie Fisher lookalike? Perfection.) and several funny moments. Unfortunately, the film came on the heels of the Columbine High School massacre and producers scrambled to remove a lot of the gore and add in comedy, which I don’t think is a bad thing. Plus, the movie brought us Courteney Cox’s bangs, which are a work of art in themselves. I also thoroughly enjoyed the twist ending with a great motive – a true bonding moment among brother and sister. Aw! 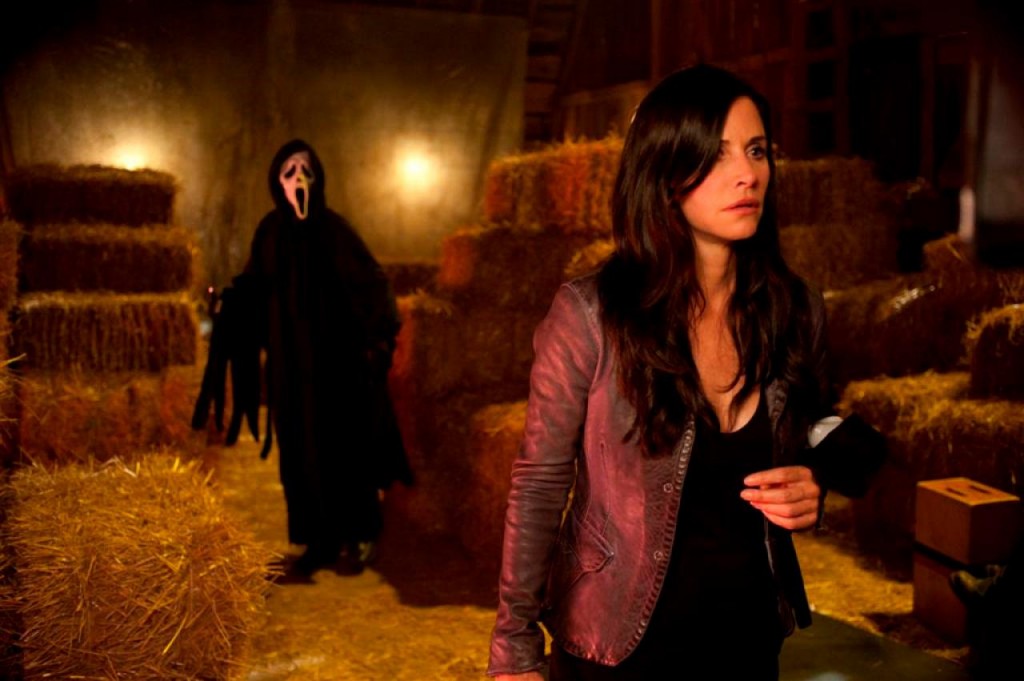 “You forgot the first rule of remakes. Don’t f*ck with the original.”

I was excited to see what would come of Scream 4 as the original movies somehow managed to remain timeless even though many of their elements (the killer calls landlines, video stores to rent movies, talk of 1-900 numbers) had become woefully outdated, and it did not disappoint. Many people didn’t think the fourth installment was necessary, but I felt like this one was a nod and a wink to the die-hard fans of the first three. It’s just as self-aware as its predecessors, and just as funny and violent. I’d imagine it would be hard to see this on its own without seeing the others because it’s rife with Scream references. I was genuinely surprised by the ending and loved that it played right off the ending of the first installment. Plus, as weird as this is to say, Hayden Panettiere was an absolutely fantastic addition to “the new class” of youngins in this one. Scream 4 is worlds better than most horror films released post-90s and still really good fun.

Though not ALWAYS the case, the first is usually the best. And this remains true for the original Scream. It’s a horror movie, but it’s also a satire, so you laugh and want to hide under the covers at the same time. It’s smart – it parodies the standard narrative that, until that point, existed in nearly every horror film – and it’s surprisingly timeless, as I mentioned before. Yes, the clothes (including Drew Barrymore’s blonde bob) and many of the references and technologies are outdated, but the film holds its own. Most teen slasher flicks are utterly forgettable, but since 1996, this is the one they’ve all aspired to be. It became a horror classic by making fun of other horror classics and made us all answer, with a resounding yes, the age-old question: “do you like scary movies?”