Drop whatever you’re doing and see this film.

Last week kicked off the world premiere of the new horror film The Boy.  Written and directed by Craig William Macneill and Clay McLeod Chapman, The Boy is “an intimate portrait of a 9-year-old sociopath’s growing fascination with death.” The Boy is based on a short film by Macneill and Chapman titled Henley, which in turn is loosely based on Chapman’s novel Miss Corpus. 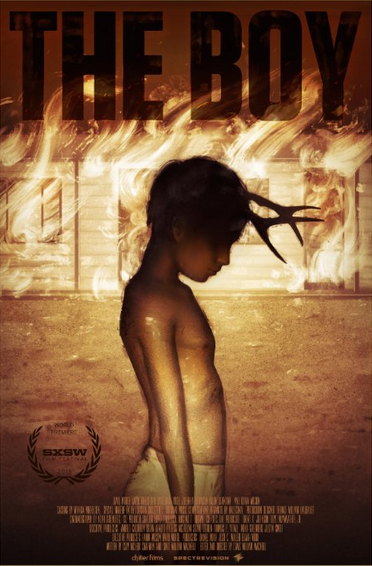 The story follows 9-year-old Ted Henley (played by Jared Breeze)– the only child of John Henley (David Morse).  The two live in and operate a failing, dilapidated roadside motel in an undisclosed state in the American West. The year is 1989.  Ted spends his days doing the majority of the housekeeping in the motel, rehearsing lines such as “this is the honeymoon suite,” and disposing of roadkill for quarters. His mom left the family some time ago with a trucker who was staying in the motel; the two now live in Florida.  John is a despondent alcoholic who seems to have abandoned any active role in Ted’s upbringing.  Thus, Ted leads a mostly solitary existence and has a history of attaching himself to the motel guests.

It is, without a doubt, one of the best psychological horror films I have ever seen.  In terms of chilling and disturbing content, The Boy is on par with We Need To Talk About Kevin.

Let’s focus on Ted.  From the beginning of the film, early indicators of his antisocial personality are seen: he procures roadkill by baiting small animals in the middle of the road, he nearly drowns the child of two motel guests while the two are playing in the pool, and it is strongly implied that he steals from guests.  Animal cruelty seems to be a significant part of Ted’s life; he likes to watch the animals get run over from his perch above the road.  He doesn’t adhere to any boundaries when it comes to motel guests; he is frequently seen going into their rooms when they’re sleeping to stare at them and go through their belongings.

In the beginning of the film, Ted manages to attract a deer for his next roadkill bid.  The result is a severe car wreck which leaves the driver, Mr. Colby (Rainn Wilson), wounded and stranded, and the deer mortally injured.  Ted watches in fascination as his dad euthanizes the deer and butchers it.  Colby, a drifter running away from a recent tragedy, is forced to check into the motel.  He attracts the attention of the local sheriff and forms an almost friendship with Ted.

Ted’s disturbing behavior escalates when he sabotages a guest’s car to make them stay another night, and then later when he stomps a chicken to death in a rage.  But it’s not until a group of party goers check into the motel that the shit really hits the fan.

It’s important to note that the violence that Ted inflicts is rarely shown on screen.  A wide angle is used during the incident with the boy in the pool, and when Ted kills the chicken, we only hear it.  Even in the horrifying climax, death is never shown on camera.

The Boy is a slow burning psychological thriller.  Macneill and Chapman use barren landscapes, deteriorating buildings, and sparse dialogue to produce a looming sense of dread that is present throughout.  The story is told primarily through visual sequences: Ted leading animals to their deaths, going through the different rooms of the motel, and entertaining his morbid curiosity.  When I watched the film, I found myself constantly at the edge of my seat, waiting anxiously for the inevitable.

Films featuring creepy children are abundant in the horror genre, but I find that stories about purely evil children, the kind of evil that is congenital rather than caused by demonic possession, are few and far between.  The Bad Seed (1956) and We Need To Talk About Kevin (2011) are two notable examples (although the latter is usually categorized as a drama rather than a horror).  What makes these kinds of films unsettling isn’t just the action that’s taking place; it’s the fact that children are the main antagonists.  It’s a parent’s worst nightmare.

The Boy is almost painful to watch in the best possible way.  Tension and claustrophobia simmer before the films destructive and fiery conclusion, and you find yourself grappling with the empathy you feel for Ted– a boy who clearly lacks any semblance of it.  Ted’s budding psychopathy, combined with his dad’s distracted parenting, gets under your skin and stays with you long after the closing credits roll.  All in all, if you like low-key, slow-paced horror films, this is the movie for you.

It’s screening in theaters, but if you prefer watching horror flicks in the comfort and privacy of your own home, you can rent it on Amazon Instant Play.

'The Boy' Is A True Terror
'The Boy' has a creepy and disturbing quality that truly gets under your skin.
Overall Score9.5
Pros
Cons
9.5Overall Score
Reader Rating: (0 Votes)
0%