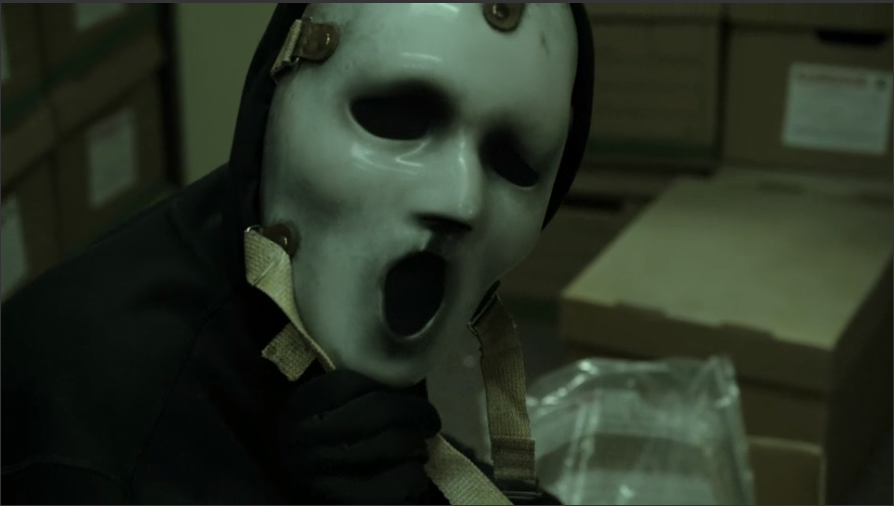 Seth Branson aka Seth Palmer aka Professor Pervert found himself in a jail cell being questioned by Sheriff Hudson.  In case you’ve forgotten, last week Branson’s real name was discovered, his past *misdeeds* came to light, and a knife with Will Belmont’s blood on it was found in his bag.  Oh, and he was caught in a compromising position with his underage girlfriend, Brooke.  Hudson starts to question Branson about all of the above, and Branson immediately lawyers up.  Smart move. 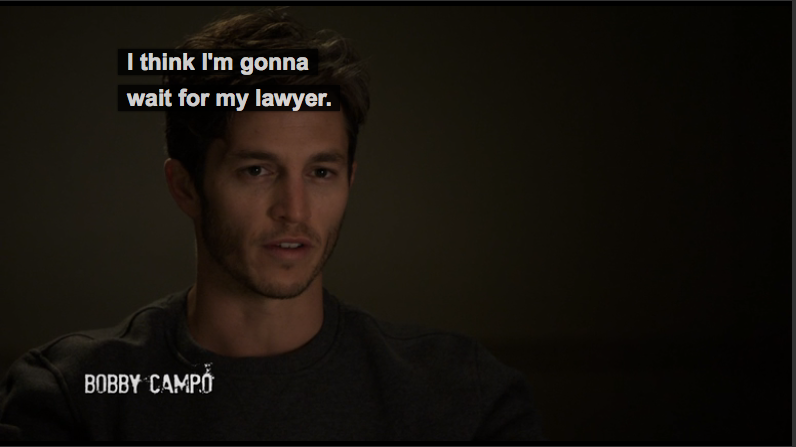 Of course you are.

Emma’s pretty sure of two things: that Branson is the illegitimate child of Brandon James and her mom, and that he is the Lakewood Slasher.  Hudson and her mom allow her to see Branson face to face in his cell, hoping that he’d have a breakdown or something and confess so that everyone could have closure and justice.  He doesn’t break.  At all.  He denies any and all involvement in either the murders or Brandon James.  Emma doesn’t buy it.  Distrust in adults is basically second nature to her now.  Oh, and Emma’s back together with Kieran because, despite the fact that she’s awesome on her own, the Scream writer’s won’t let her go two episodes without a boyfriend. 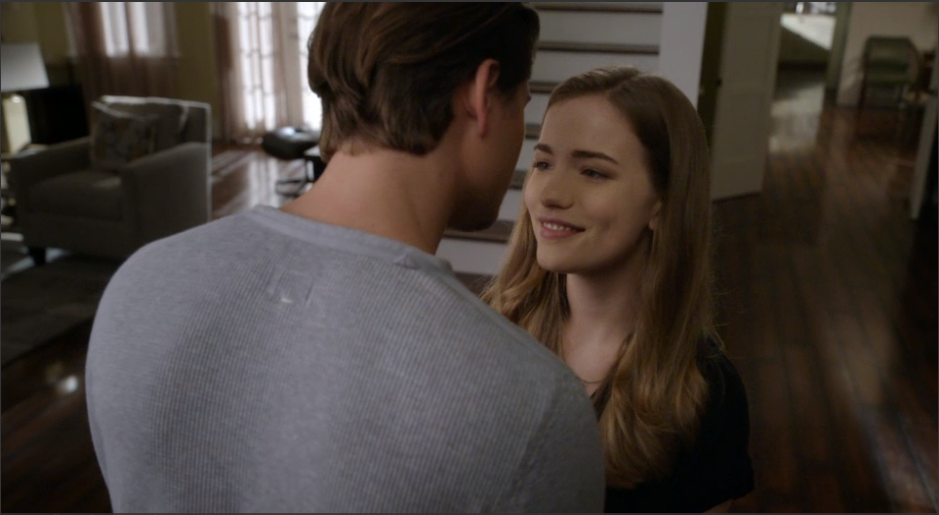 Speaking of tangled heterosexual romances, Brooke is crashing at Jake’s family’s house.  He sets her up in the guest room, gives her some fresh towels, and apologizes for his mom’s decorating choices.  Neither he nor Emma understand why Brooke was into Branson.  I don’t either, but it probably has something to do with her absent and self-absorbed parents.  Probably. 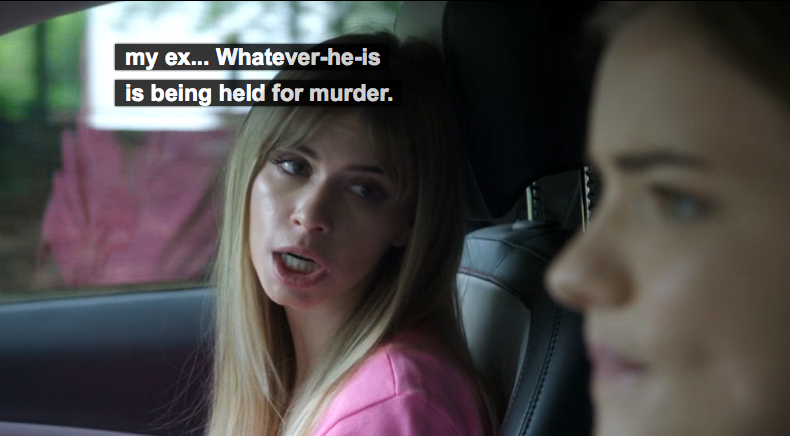 Anyway, it’s Halloween and the annual town dance for the young’uns is being held.  Hudson makes a statement about it, urging the young people of Lakewood to come to the dance (without costumes featuring masks); he thinks that safety is practically guaranteed when everyone is in one place, especially since alcohol is not allowed at the dance.  Lol, okay, Sheriff.  Piper is at the press conference and calls Hudson out for being overly confident that he’s caught the killer.  Hudson brushes off the idea that he could be wrong and tells Piper that he’s keeping the peace.  “What are you doing?” he asks her.  Doing a better job at investigating the murders than you are, pal. 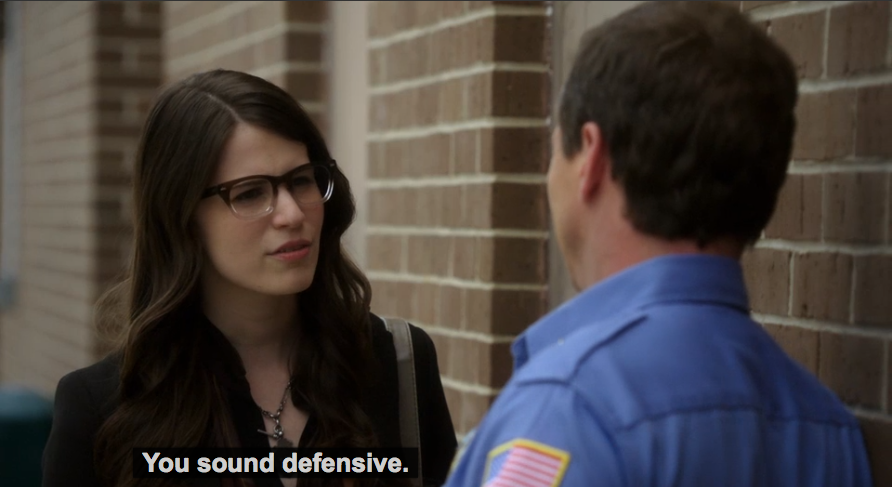 Piper tells Emma that she managed to track down Brandon James’ mother, because she’s a competent journalist who’s apparently better at investigating crimes than detectives are.  She picks Emma up and the two drive to a nursing home close to Lakewood.  Mrs. James is totally senile (and randomly Southern) and thinks that Emma is Maggie; she asks Emma why she had her son killed and starts singing that creepy “Daisy” song that has become both Brandon James and the killer’s theme music.  Mrs. James says that Brandon’s son came to see her too; his name is Seth. 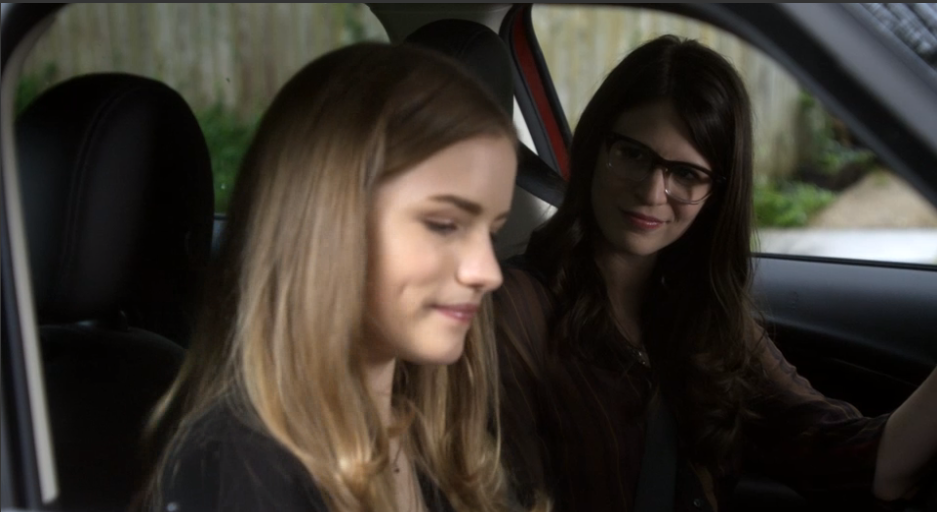 I hope Piper isn’t the killer; I like her and Emma as a team.

In the meantime, Audrey and Noah have been doing some investigating of their own, as always.  Audrey mentions that before her untimely death, Rachel had a habit of documenting practically every moment of her life via video cam.  And that those tapes, along with Nina’s hard drive, had been mysteriously erased.  Luckily, Rachel had backed up everything on The Cloud.  Audrey and Noah find a video time stamped the night before Nina’s murder: it’s Nina leaving a bar with none other than Kieran.  Interesting. 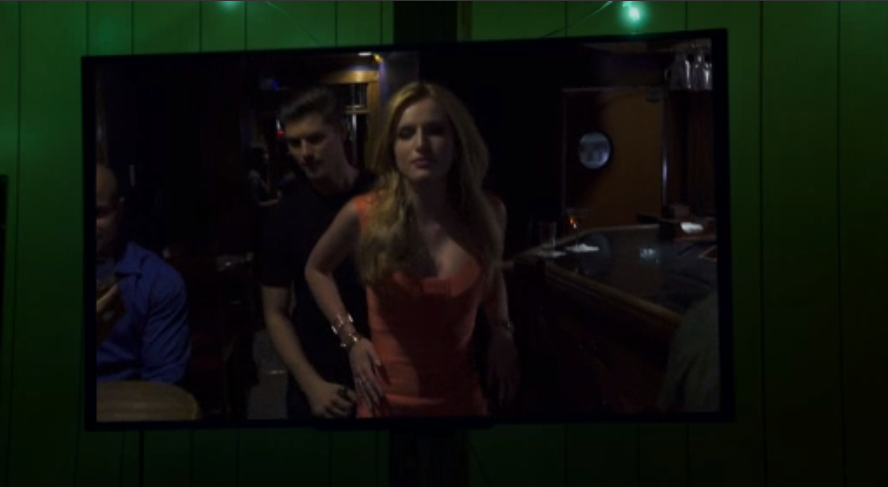 Back to Brooke: she’s upset because her webcam on her laptop turned on when she was changing her clothes (side note: why is this teenage girl always walking around/ running for her life in expensive-looking lingerie on this show? It’s like the writers are trying to establish her as the “school slut/ sex-object.”).  She confronts Jake about this technological mishap.  He says he doesn’t know anything about it.  Brooke is disinclined to believe him. 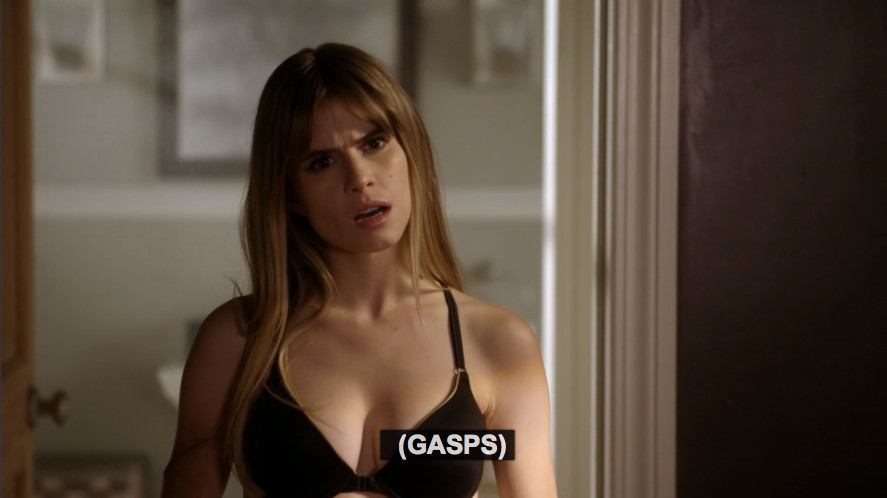 TFW you realize you’re being spied on

Emma gets ready for the dance.  She’s dressing up like the Uma Thurman character Mia Wallace (a rite of passage, really).  It’s established through dialogue that Kieran is going to meet her at the dance, rather than picking her up.  Brooke, in the meantime, is preparing for a renegade party at Casa de Maddox by stocking up on booze at the local liquor store.  Audrey catches up with Emma at the dance and shows her the video of Kieran leaving the bar with Nina.  Oh, and also, Sheriff Hudson, was attacked by the Lakewood Slasher; he hit him in the head with a crowbar while Hudson was investigating someone’s home. 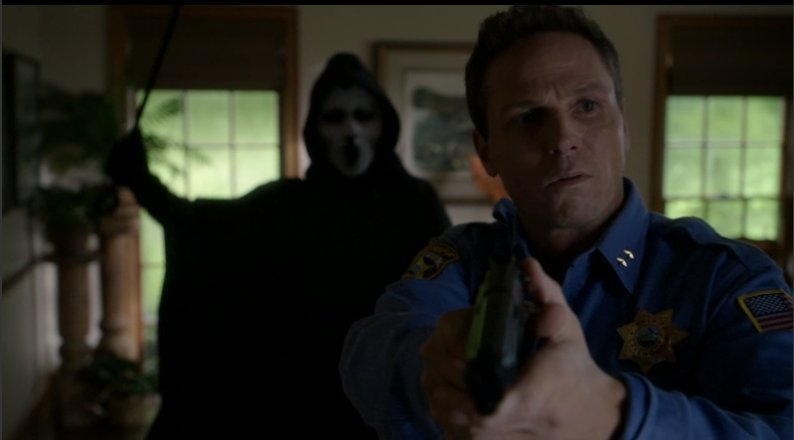 Right behind you, genius.

Maggie is being a shining example of an actively involved parent and chaperoning the dance.  When Kieran finally arrives, she hands him a cup of non-alcoholic punch (ew) and mentions that she can’t seem to get a hold of his dad on the phone. Kieran volunteers to try to reach his dad.  He and Emma do the Pulp Fiction dance and afterwards, she confronts him about the video.  He tells her that nothing happened; he was pissed at his dad and went to the bar to find solace in a pint, talked to Nina for a bit, didn’t catch her name, and ended up driving her home.  Emma doesn’t trust Kieran and he leaves her at the dance. 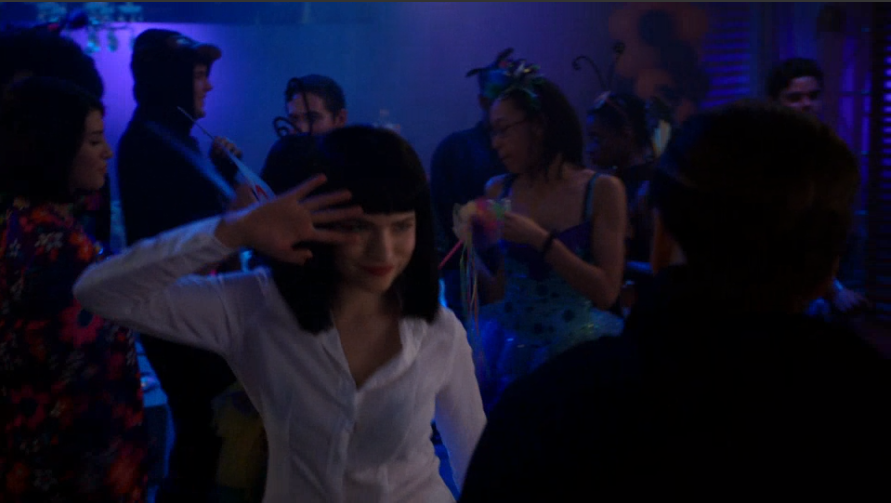 I don’t need you; I can do the twist.

Piper goes to the dance to find Emma and tell her the latest:  on a hunch, she went back to the nursing home with a yearbook.  She asked Mrs. James to point out her newly discovered grandson.  Instead of pointing to Branson in the yearbook, she points out Kieran’s picture from the candlelight vigil.  Just then, a live-feed is projected in front of the dance: it’s Sheriff Hudson, tied up, and wounded, in an unknown location.  The scene immediately cuts to a police scanner with the message that Branson has escaped from his jail cell and is armed and dangerous. We also see security footage of a murdered security guard in front of Branson’s open cell. 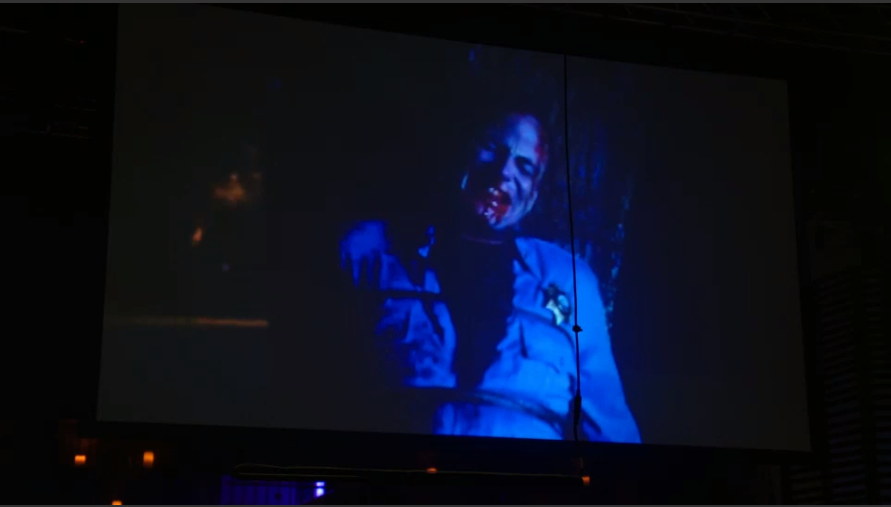 – How did Branson escape? Where is he?

– Is Kieran the killer? Or another red herring?

– Is Sheriff Hudson going to survive?

– Why did Kieran visit Mrs James?

– How are all these high school kids able to get alcohol so easily?  When I was in high school, we had two choices: sneak booze from our parents’ supply or bribe an older sibling to buy it for us.  I mean, Kieran could pass for 33, but still.

– Branson and Kieran are working together

– Other recap writers are speculating that the killer is Piper because her whereabouts cannot always be accounted for, and because her dad was murdered.  I don’t want it to be Piper, but it definitely can be.  It would be interesting if she became a serial killer to have something new to explore on her podcast.  Hey, we all do weird things for our art.