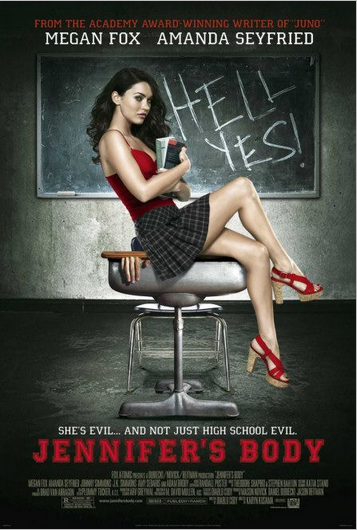 Who remembers the 2009 film Jennifer’s Body? It got a lot of hype during the advertising stage for two reason: it was written by Diablo Cody, the screenwriter behind the 2007 hit Juno and unofficial godmother of weird, hipster-y, wannabe film buff teenagers.  And it starred Megan Fox, the sex symbol of the mid-2000’s, as the eponymous Jennifer.  It was advertised as a sexy teen slasher about a possessed cheerleader going on a bloody killing spree.  The trailer looked great, the cast was star-studded, and the writer was already popular among the teenage crowd.  So why did it bomb so badly in the ratings?

Jennifer’s Body tells the story of 16-year-old Anita “Needy” Lesnicky (played by Amanda Seyfried)– a nerdy high school student whose BFF, the beautiful and popular Jennifer Check, turns into a demon after an unfortunate encounter with an indie boy band.  Jennifer starts offing the guys in their class because she needs their blood and energy to maintain her beauty and regenerative powers.  And also because she wants to and knows she can get away with it.  Horrified at the monster Jennifer has become, Needy realizes that she must put a stop to Jennifer’s murder spree.

Many reviewers (mostly male) criticized the film for a supposed lack of clear character motivation, a disjointed plot line, Cody’s signature quirky dialogue, and too much blurring of comedy and horror genres.  And also because “much to the chagrin of the randy male teens that Jennifer’s Body is meant to lure into theatres, they’re offered nary a glimpse of Ms. Fox’s naked glories” (Steve Newton, Georgia Straight), and “the girls keep their clothes on” (Jeffrey M. Anderson, Combustible Celluloid).  Not to worry though, because it has “the best close-up girl-girl liplock since Cruel Intentions” (Nick Pinkerton, The Village Voice).

Despite the criticisms, I truly believe Jennifer’s Body is nothing short of brilliant.  It joins the ranks of genre films and stories that exploits and mocks patriarchal objections and fears about women’s sexuality and empowerment, while maintaining a blatant sense of self-awareness of how the film goes about doing so.  Jennifer becomes a demon after members of a struggling boy band try to sacrifice her to Satan to gain fame.  They choose her because they think that she’s a virgin (she’s not).  The plan backfires and they create a succubus-like creature.  During the movie, Jennifer uses her beauty and popularity to seduce her male classmates, isolate them, and rip them apart.  She’s a literal embodiment of the femme-fatale/ man-eater/ Black Widow media trope.

To say that Jennifer’s Body is just another teen horror flick is a gross misinterpretation of what Diablo Cody and director Karyn Kusama accomplished.  Jennifer’s Body is a biting and witty satire about assumptions and stereotypes about teenage girls, friendships between women, and female sexuality, wrapped up in a clever and funny supernatural slasher.  It’s fun, it’s smart, and it’s chock full of memorable lines like “It smells like Thai food in here; have you guys been fucking?” and “How could I ever be insecure? I was the Snowflake Queen.” Better still, it passes the Bechdel Test. If you haven’t seen it, I highly recommend that you do.  It’s on Amazon Instant Play (and probably a million other places on the Internet at this point) and it’s worth all 102 minutes of screen time.