Time to break out your hairspray and leather jackets. It’s headbanging time. 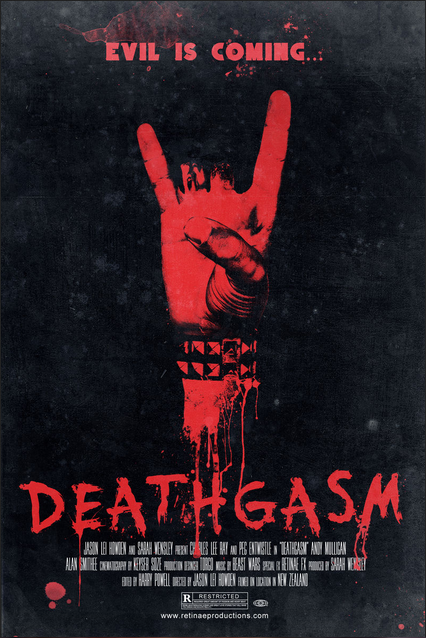 You know those bible-thumpers who insist that rock music, particularly of the heavy metal strain, summons the devil, or at the very least, worships Satan? Obviously in reality, they’re insane.  But in Jason Lei Howden’s festival-sweeping film, those fundies are spot-on for once:

High School is Hell! Metal-thrashing Brodie is an outcast in a sea of jocks and cheerleaders until he meets a kindred spirit in fellow metalhead Zakk. After starting their own band, Brodie and Zakk’s resentment of the suburban wasteland leads them to a mysterious piece of sheet music said to grant Ultimate Power to whoever plays it. But the music also summons an ancient evil entity known as Aeloth The Blind One, who threatens to tear apart existence itself. Their classmates and family become inhabited by demonic forces, tearing out their own eyes and turning into psychotic murderers… and this is only the beginning! It’s up to Brodie, Zakk and their group of friends to stop a force of pure evil from devouring all of mankind.

Filmed and produced in New Zealand, Deathgasm took SXSW by storm with its self-aware and purely fun storyline and cinematography.  Richard Whittaker (The Austin Chronicle) described Deathgasm as “shamelessly low-brow, reaching a beer-fueled gleeful high with a zombie-vs.-sex toys battle, it’s a very metal tribute to the grand tradition of Kiwi splatter comedies.”

Judging from the trailer, Deathgasm looks like something I would watch with my friends at a slumber party, in the best possible way.  It hits theaters in the U.S. (and Video on Demand) on October 2nd.  I’m excited for two things: the film itself, and the reaction from the religious right.