By “creepy” new trailer, I meant “absolutely terrifying.”  The soon-to-be-released (in the United States) British-Irish supernatural horror film The Hallow has already gotten positive reviews from those lucky enough to attend the first screenings.  In his review of The Hallow for The Hollywood Reporter, David Rooney described the film as a “viscerally scary fantasy horror tale”.  Ken W. Hanley of Fangoria wrote: “The Hallow excels beyond its mistakes to create one of the most visually engaging and starkly terrifying monster movies in recent memory.”

The reviews also note a particularly intriguing tidbit about the movie: it features the fungus ophiocordyceps unilateralis, also known as the “zombie fungus.”  It’s a real thing, and it’s both skin-crawling and morbidly fascinating.  The zombie fungus affects ants in tropical forests: the fungus will control the infected ant’s behavior, forcing it to leave its colony, affix itself to a leaf, and remain there until its death, which usually happens 4-10 days after the infection.  The fungus reproduces inside the ant’s body, eventually causing a cranial explosion when the fungal spores are released. 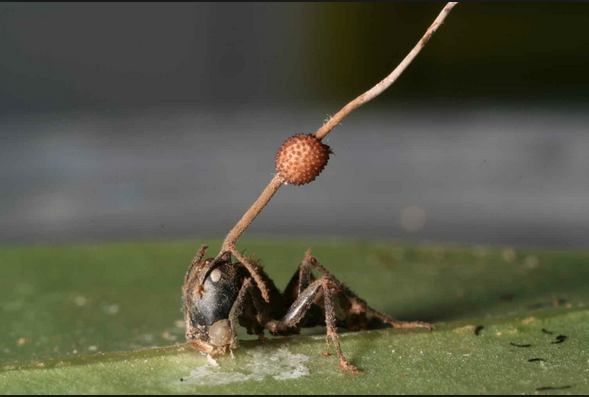 Zombie fungus aside (although I’m sure everyone is curious as to how exactly this natural phenomenon factors into the narrative), the producers of The Hallow just dropped yet another tantalizing trailer to prepare stateside horror fans for the terror to come.  In this new teaser, we’re treated to some rather scary imagery and a great, spooky atmosphere.  The movie premieres in U.S. November 6th.