Sometimes I wonder what an R-rated Pixar movie would be like. And I kind of have my answer with Hell and Back, a stop motion horror/comedy from directors Tom Glanas (Sarah Silverman: Jesus is Magic) and Ross Shuman. The film boats a stacked deck of comedy all-stars: Nick Swardson, Mila Kunis, Bob Odenkirk, Rob Riggle, TJ Miller, Danny McBride and Susan Sarandon. Written by Herb Sterbakov and Zeb Wells, the film wears its R rating proudly.

Remy (Swardson), Auggie (Miller) and Curt (Riggle) are best friends who work at a failing carnival. When they jokingly take a blood oath and break it, the three are sent into the depths of hell. Curt then gets kidnapped by the Devil (Odenkirk) and offered up for sacrifice. So it’s up to Remy and Auggie to save him with the help of demon Deema (Mila Kunis).

The comedy in this movie is funny, with some pop culture references and good sight gags. The humor does feel like Family Guy, and the film really relies on its cast to make it soar. The gags are energetic but juvenile. Some sex jokes, and drug jokes and dumb but amusing one-liners. Definitely watch this with your pals and a few beers but it’s not going to be anyone’s favorite movie of all time. 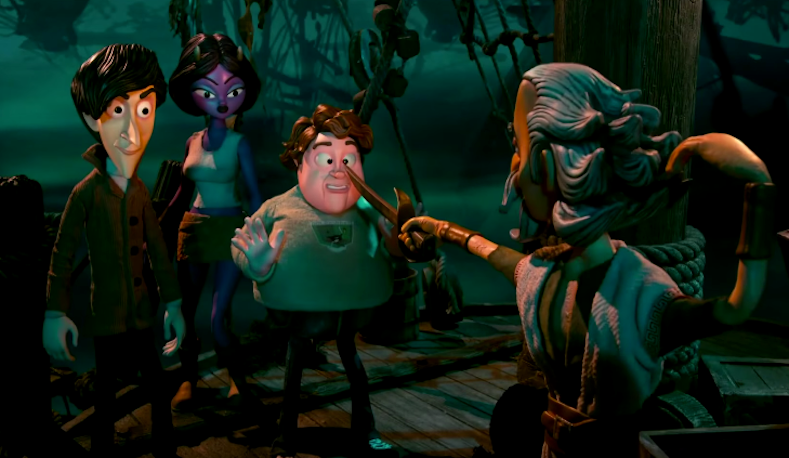 The movie does feel really interminable, even though it’s only 90 minutes long. The film is plot heavy, even though it doesn’t seem too concerned with coherence. It’s a weird way to approach the story; there are so many beats the plot has to move through but nobody seems to care.

If Hell and Back works at all, it’s because of this cast. The main stars are all game and earnest, no annoying “wink-wink” nods to the audience. With cameos from some funny people like Paul F. Tompkins, Kumail Nanjiani, Michael Pena, David Koechner, Jennifer Coolidge and Paul Scheer, the jokes really land. Everyone seems to be having a blast and the movie feels more fun than it should be.

Even if Hell and Back isn’t worth going to a theater for, it should make for a fun midnight movie on Halloween. It’s rare to see an animated movie that’s rated R and it’s weird to see stop motion characters curse and talk about sex. Enjoy it for what it’s worth and as a rare chance to see all these funny actors and comedians in one movie together.

'Hell and Back:' Stop-Motion for Stoners
Featuring an awesome voice cast, 'Hell and Back' is a goofy but undercooked stoner comedy.
Rating6.5
Pros
Cons
6.5Overall Score
Reader Rating: (0 Votes)
0%