Clocking in at one hour and eight minutes, last night’s episode of American Horror Story: Hotel was relatively short.  Nevertheless, it was chock full of insanity.  If you were doing some last minute shopping at your local Occult shop to prepare for Samhain and missed the episode, I’ll give you the deets. 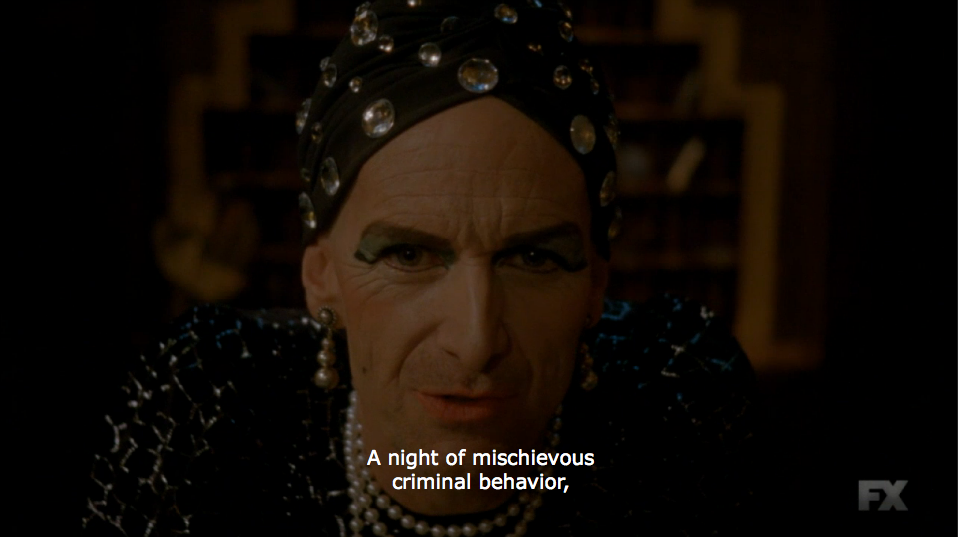 The teaser for the episode focuses on serial killer Richard Ramirez, who is checking in for a short stay at the Hotel Cortez. It appears that the hotel has been expecting him, as his name is in a guest book.  He explains that he has a standing reservation for something called “Devil’s Night” and casually mentions that this is his third time coming to this party. And that he died in 2013.  Liz Taylor shows Ramirez to his room and tells him the owner left “some treats” on the pillow. Ramirez refuses the key.  “I don’t need the key,” he says.  For those unfamiliar with Richard Ramirez, he was dubbed by the media as “The Night Stalker,” and his MO was breaking into his victims’ homes.  Ramirez sneaks through the window of his room.  Turns out, the “treats” that Liz Taylor mentioned are a sleeping married couple.  Ramirez bashes in the husband’s skull with a lamp and the wife runs out of the room yelling for help.  “There’s a killer after me!” she screams before running into James March.  “And a killer before you,” he says.  March restrains the woman and greets Ramirez like an old friend before inviting him to “finish her off.” 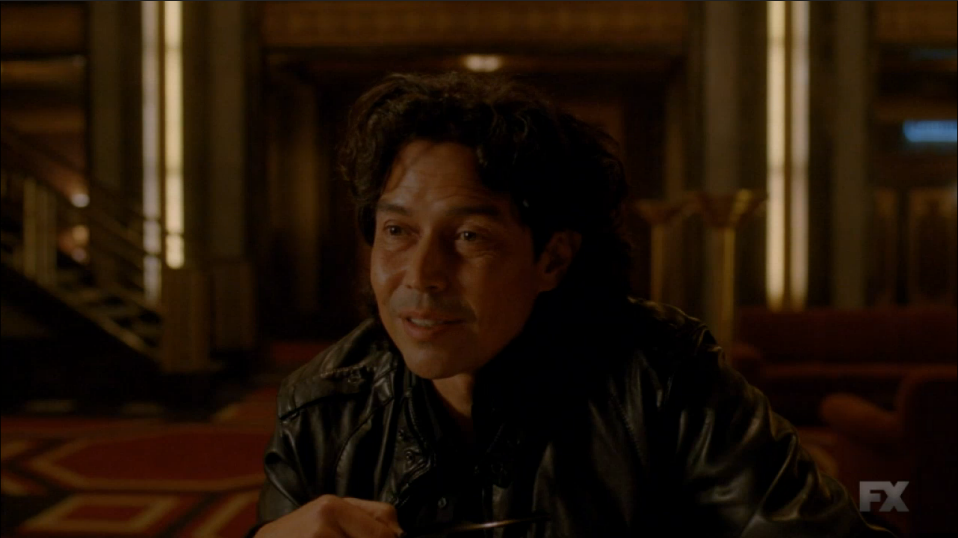 After the credits,  John wakes up and is horrified to discover that a copious amount of blood is leaking from the ceiling.  We cut to Miss Evers, who is upstairs and trying in vain to get blood stains out of some laundry; as soon as she gets the stain out, it regenerates instantly.  When John goes upstairs to investigate the leak, Miss Evers assures him that everything is fine, but that Halloween is a difficult time for her.  A flashback reveals that her son was kidnapped by a serial child murderer on Halloween when she wasn’t paying attention to him. When the killer’s location was revealed, only her son’s bloodstained Halloween costume remained– bodies, a policeman explains, had been treated with quicklime and the bones scattered in a mass grave.  It seems that John isn’t the only parent in the hotel who has suffered the loss of a child. 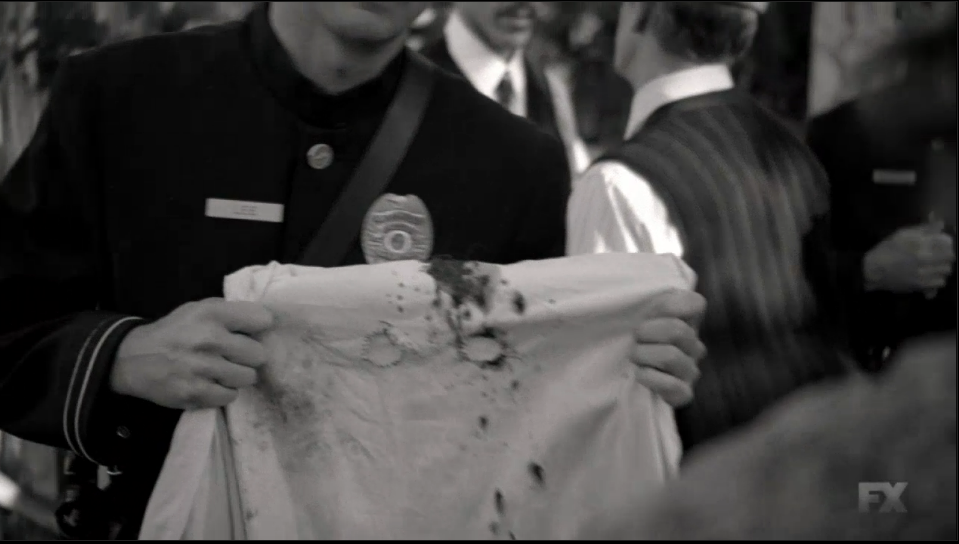 Speaking of John’s missing child, we immediately cut to Alex, who has apparently retrieved Holden from the Hotel Cortez and has brought him back home.  She does a brief examination of him because he seems a bit…off.  Like Scarlet described, he is emotionless– and hasn’t aged a day.  Alex takes Holden’s temperature and is startled by the results: 75.5º (about room temperature).  Holden says he’s not cold.  But he is thirsty.  Alex goes to get him some juice and when she returns, she finds her beloved, long-lost son drinking the blood of the family dog.  Holden says he doesn’t feel well and needs his mommy.  Alex reminds him that she is his mother.  And then Holden says the most heartbreaking thing a kid can say to his mother (I imagine): “My other mommy.” 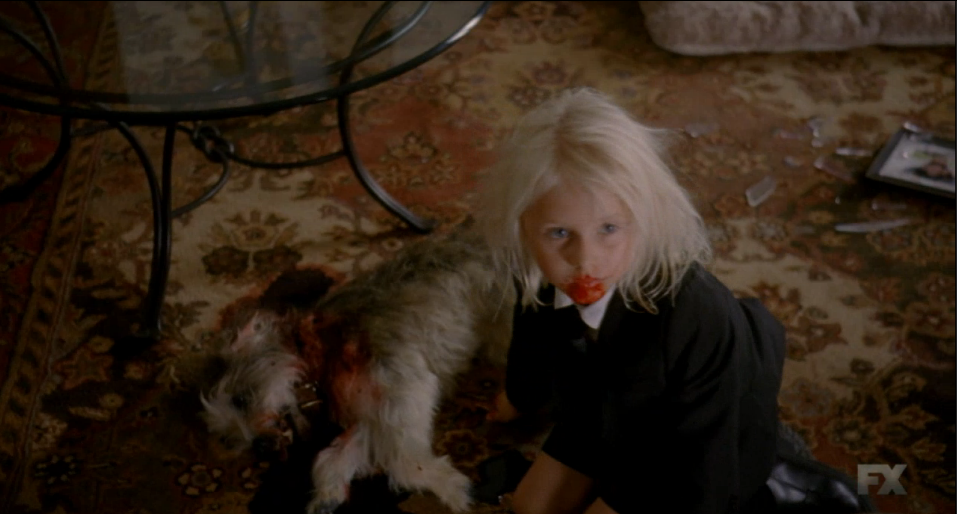 Meanwhile, John is at the office, researching the serial killer that murdered Miss Evers’ son.  He is shocked and confused to find that the crimes happened in the 1920’s, and that there is a photograph of Miss Evers in the police records.

Alex takes Holden back to the hotel and watches Holden climb into his coffin and fall asleep.  Countess Elizabeth appears and offers Alex some answers.  She brings her to her room, pours her a drink, and explains that she infected Holden with a virus that will make him immortal, and that she abducted him (or “saved” him, as she puts it) because Holden was being neglected.  Alex points a gun at Elizabeth and demands that she reverse Holden’s condition.  Elizabeth tells her that the virus is incurable and that Holden will remain this way permanently– and that if she truly wants to be with her son, Elizabeth will infect Alex too. 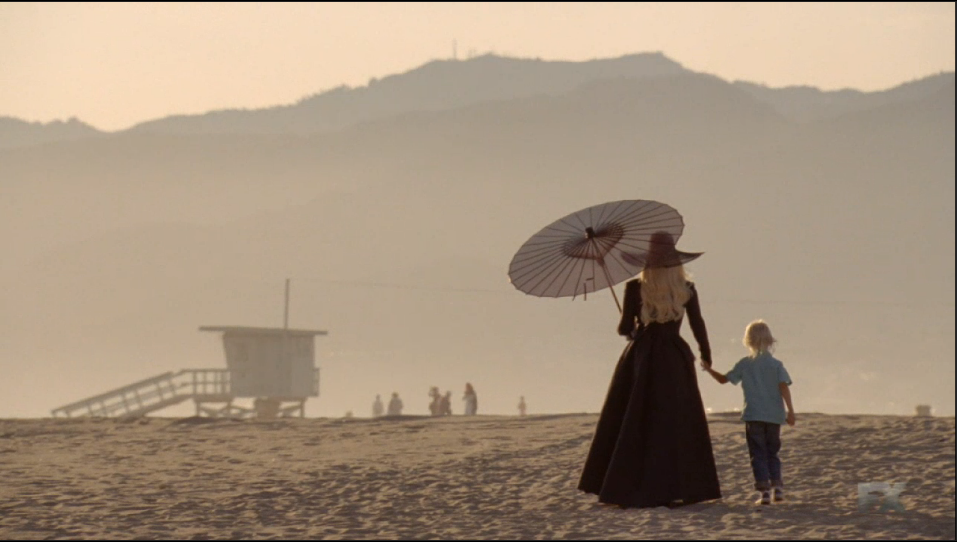 Back to John.  He’s at the hotel bar, and orders an alcoholic drink for once.  In swaggers Aileen Wuornos (played by AHS veteren and heartthrob Lily Rabe), in all her rough, mentally unstable glory.  John thinks the woman who walked into the bar is just wearing a convincing costume– after all, Wuornos was executed in 2002.  Wuornos justifies murdering seven men and manages to seduce John.  He takes her upstairs and she promptly knocks him out, ties him up, and prepares to kill him.  John still doesn’t believe that she’s the real Aileen Wuornos; he thinks she’s just insane.  John manages to escape and handcuffs her to the sink.  He goes through her purse and finds an ID that proclaims her to be exactly who she says she is. 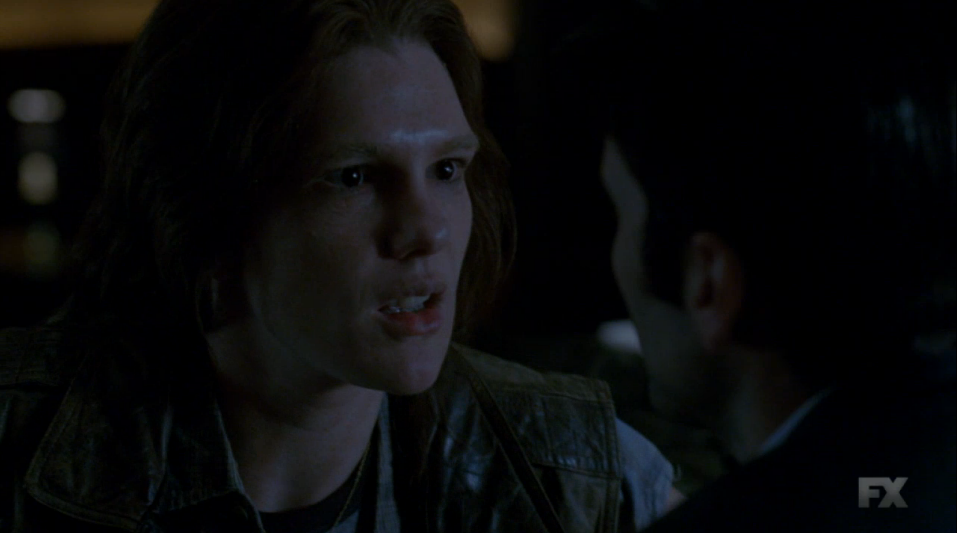 John runs down to the reception desk to confront Liz Taylor about the murder attempt, and to call the police.  Liz Taylor informs him that if the police were to arrive, they wouldn’t find anyone in his room.  “Mr. March is very protective of his invited guests,” they say.  Liz Taylor explains to John that Devil’s Night is an exclusive annual dinner party that March throws.  They look at the list, and are surprised that John’s name is on it, right below Richard Ramirez. 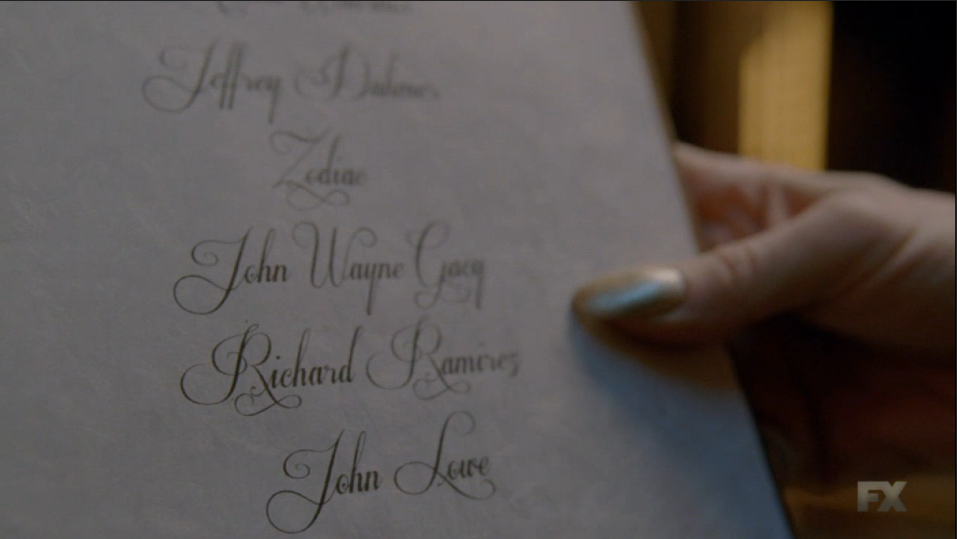 John changes into a tuxedo that Liz Taylor has kindly laid out for him, and goes to the party.  In attendance are John Wayne Gacy, Richard Ramirez, Jeffrey Dahmer, Aileen Wuornos, and the Zodiac Killer, who is dressed in an amorphous black suit and black mask, identifiable only by the Zodiac symbol emblazoned on the outfit (you know, because the Zodiac Killer has never been identified).  James March, of course, is also there, making sure all of his guests sit by there name cards, and proposing a toast with absinthe.  John is still in complete denial about the people with whom he’s sitting.  All of the serial killers died years ago.  He still thinks, or wants to think, that it’s an elaborate prank. 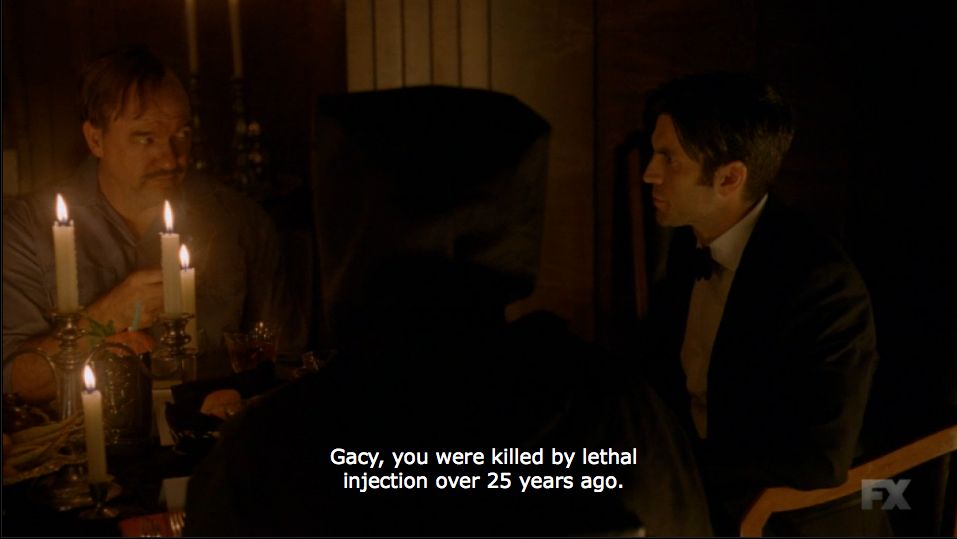 The killers introduce themselves to John and talk and joke amongst themselves.  It seems that they are all familiar with each other and with everyone’s crimes.  Zodiac is late, and a crack is made about them being too busy writing letters, and later Gacy jokes about having 30 bodies hidden in his crawlspace.  March explains that he mentored all of them, and is fascinated by John. 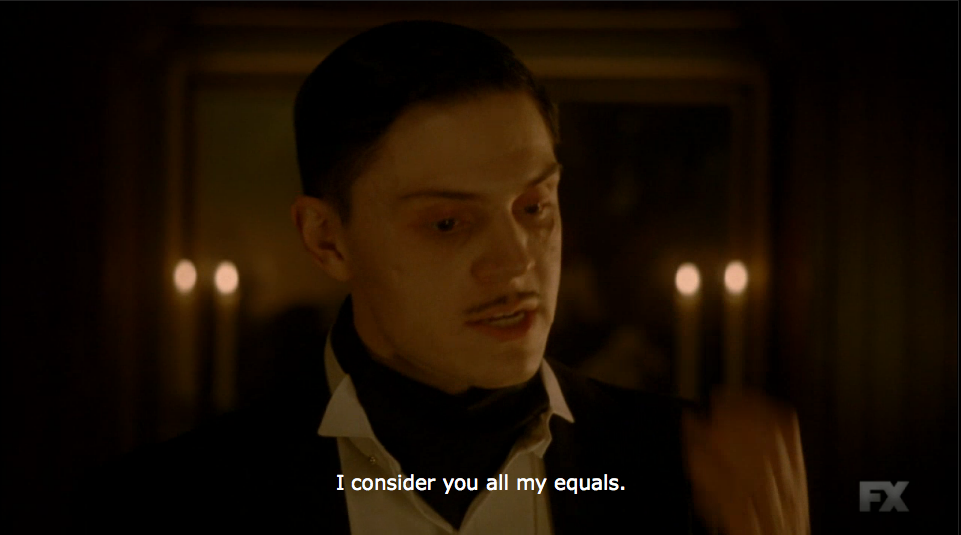 The party continues with more alcohol and a live human for Dahmer to torture and later eat.  And then, there is a human sacrifice, provided by Sally.  She leads a human to their ultimate demise every year so that March will leave her alone.  Gacy handcuffs John to his chair (his “handcuff trick”) so that he can’t interfere with the sacrifice.  John struggles as the sacrifice is stabbed to death by everyone.  He is eventually approached by Sally, who tells him that there is no one in the room.  Meanwhile, Alex drinks Countess Elizabeth’s blood to become infected with the vampire virus. 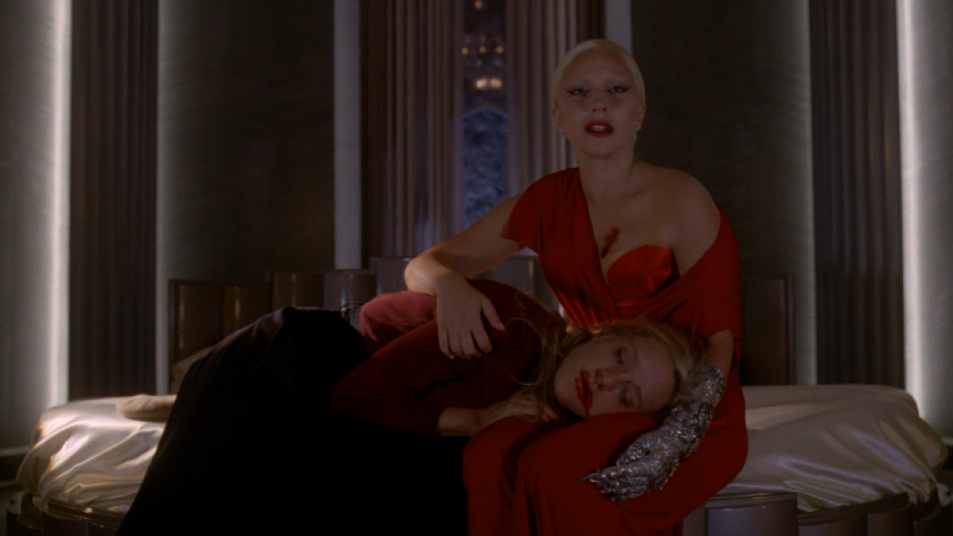