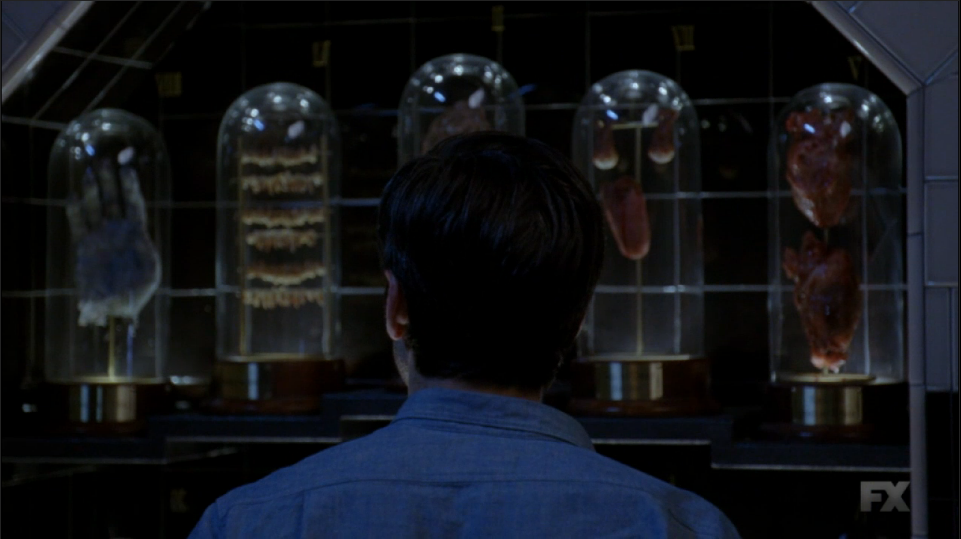 The episode starts off with Wren and John, just seconds before she throws herself in front of the bus.  The police are called, the bus driver expresses deep remorse and horror (anyone else feel awful for this guy?), and John makes a hasty exit to return to the Hotel Cortez.  Once there, he confronts Liz Taylor, still mourning Tristan’s death, and demands information about the Ten Commandments Killer, because Wren told him that she had been helping him.  Liz avoids the question entirely and tells him that Wren is a liar.  Luckily, Sally is there, ready to tell John exactly what he wants to know.

John has already deduced that the TCK is in the hotel.  Sally leads him upstairs and starts to unlock the door to Room 64– John’s room.  He’s confused, and still angry, but Sally assures him that he will find what he’s looking for.  Once inside, she tells him that the answers are behind the armoire.  John moves it aside to find a hidden room with James Patrick March’s initials on the door.  The two venture inside to find…a trophy room filled with memorabilia from the TCK’s victims: the hand of a thief (“Thou shalt not steal”), teeth from a group of migrant laborers (“Thou shalt remember the Sabbath day and keep it holy”), half a brain from Martin Gamboa, who blogged about the Oscars (“Thou shalt not worship false idols”), the tongue and eyes of the adulterer from episode 1 (“Thou shalt not commit adultery”), the hearts of the two men who murdered their parents from episode 1 (“Thou shalt honor thy mother and thy father”), the vocal cords of the gossip bloggers from episode 3 (“Thou shalt not bear false witness”), and finally, the spleen of a televangelist (“Thou shalt not take the Lord’s name in vain”).  John is confused; how would the Ten Commandments Killer be able to go in and out of John’s room to add to his trophy collection? “Who let him in?” he asks.  “Nobody let him in,” Sally says, “He had a key.”  And then it hits John:

He is the Ten Commandments Killer.

Dazed, overwhelmed, and out of his mind with horror, John makes his way to the police station to find his former partner, Hahn, who is monitoring Wren’s body.  John’s mind has been flooded with recovered memories. He begins to spin a yarn, and boy, is it twisted.  He confesses to Hahn that after that case where he discovered a family dead due to carbon monoxide poisoning and a father killing himself because of it, he went for a drink at the Hotel Cortez.  There, he met, for the first time, Liz Taylor, Sally, Donovan, Elizabeth…and James P. March.  The “drink” turned into a two-day bender, fueled by absinthe and spent with March, discussing murder, man’s law, and God’s law.  It is revealed that March was quite taken with John; he wanted him to continue his legacy of murdering people based on violations of the Ten Commandments.  In fact, he wanted John so badly that he enticed Elizabeth to kidnap Holden, which pushed John over the edge.

John reveals that he has been living a double life: his public life as a family-oriented homicide detective, and his private life as a frequent flier at the Hotel Cortez.  He started having an affair with Sally, as well as an emotional affair with March, in which the latter would pretty much act as his therapist when John would lament the lack of justice in the world.  March led him to his first victim: Martin Gamboa, the Oscar blogger.  And also, predatory pedophile.  John tracked him down and murdered him in his home, and then attempted to hang himself.  Luckily, March arrived just in time to cut him down.  Sally was there too, but she was ready to let John die so he could be with her forever as a ghost.  March, angered that Sally didn’t try to stop John from committing suicide, reminds her of their deal: she does March’s bidding, and he protects her from being devoured by the Addiction Demon.

At this point, Hahn interrupts John to inquire about Sally.  He shows John a picture of her and tells him that she died in 1994.  Remember when we saw Sally fall out of a window in the Hotel Cortez? Hahn tries to tell John that he’s confused, and that there’s no way he could be the Ten Commandments Killer.  Further flashbacks reveal that John chose victims based on what problem he wanted to fix in his own life: he killed the pedophile because he was angry at the disappearance of his son and he killed the adulterers because he suspected his wife of having an affair with Hahn.  It’s also revealed that John never remembers anything that happens at the Hotel Cortez.  But now that he’s finally admitted to himself that he is a murderer, he’s able to be fully lucid and join his two personalities.

Hahn still thinks that John has officially gone crazy.  Can you blame him?  When Hahn gets close to John, the latter stabs him in the stomach.  “Thou shalt not covet thy neighbor’s wife,” John says.  He then proceeds to stab him again, killing him.

John, carrying a bloody paper bag, returns to the Hotel Cortez.  Iris greets him, pretending she’s never seen him before.  John tells her that he knows what he is, and Iris drops the act, relieved that she no longer has to keep up the ruse.  She tells him that Sally enlisted Wren to watch out for him and make sure he didn’t die outside the hotel.  He goes up to his room and meets with March.  John has a new trophy, taken from Hahn: the “instrument of adultery.” 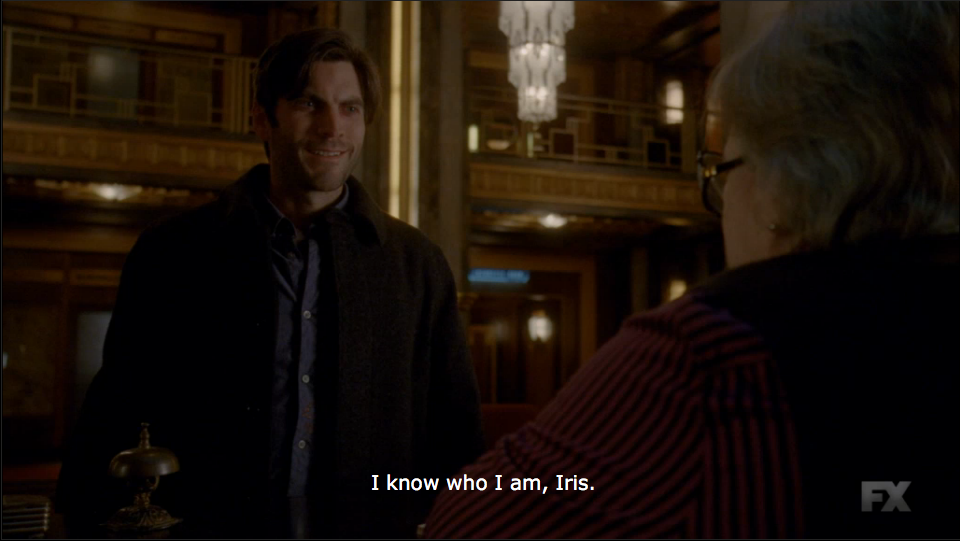