The episode begins with Countess Elizabeth lamenting her age and staring at the hole in the wall of the Hotel Cortez where her former lovers, Valentino and Natasha, had just escaped.  She looks through an old suitcase (either Valentino’s or Natasha’s) and relives the memories of when she was a young Hollywood woman without a care in the world.

The scene immediately shifts to Elizabeth and her fiancé Will planning their wedding.  Will wants an elaborate affair– after all, he is a famous New York designer.  Elizabeth, on the other hand, is after a more intimate ceremony.  Namely a justice of the peace, a witness, and a fabulous gown designed by Will.  She tries to recruit her old friend Liz Taylor to be on flower detail, but she’s still angry that Elizabeth murdered Tristan.  Elizabeth doesn’t understand what Liz’s problem is; she made Liz the woman she is today, and really, what’s a murdered boyfriend among friends? Elizabeth gets a pedicure and watches a news story about an exsanguinated homeless man and a subsequent hunt for a group of children who may have witnessed the attack.  She broods about how she can’t trust anyone but herself.  “A woman can only be pushed so far,” she narrates. “And I’m right on the edge .”  Suddenly, she gets a phone call from her private investigator.  He’s found Valentino.  Elizabeth goes to the motel where Valentino and Natasha are staying and shares a passionate kiss with her long-lost love. 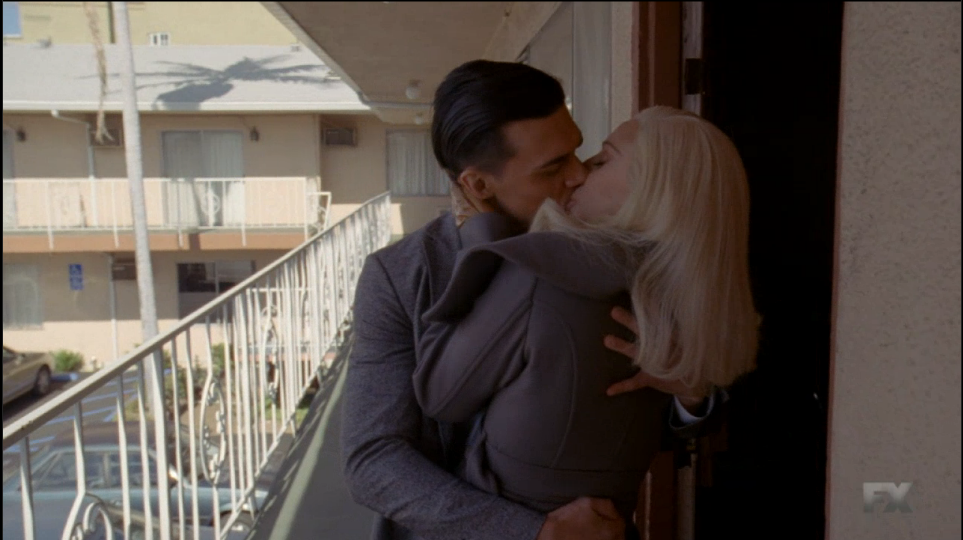 And then immediately afterwards, goes back to the Hotel Cortez and has sex with her recently jilted lover, Donovan.  You know, the guy who has teamed up with Ramona Royale and Iris to kill her and her children.  But revenge isn’t exactly on Donovan’s mind at the moment.  He’s just happy to be back with Elizabeth.  But he wants to make sure that this time, it’s for reals.  He doesn’t care about monogamy, but he does want Elizabeth to commit to him and love only him.  Hey, men have emotional needs, too.  Elizabeth swears her love and casually mentions that she’s getting married on Wednesday.  Before Donovan can get upset, Elizabeth tells him to relax because she’ll “be a widow by Thursday.  A rich widow.”  That’s a plan that Donovan can totally get behind, and the two make a list of everyone they want to kill.  Aww, a hit list.  So romantic. 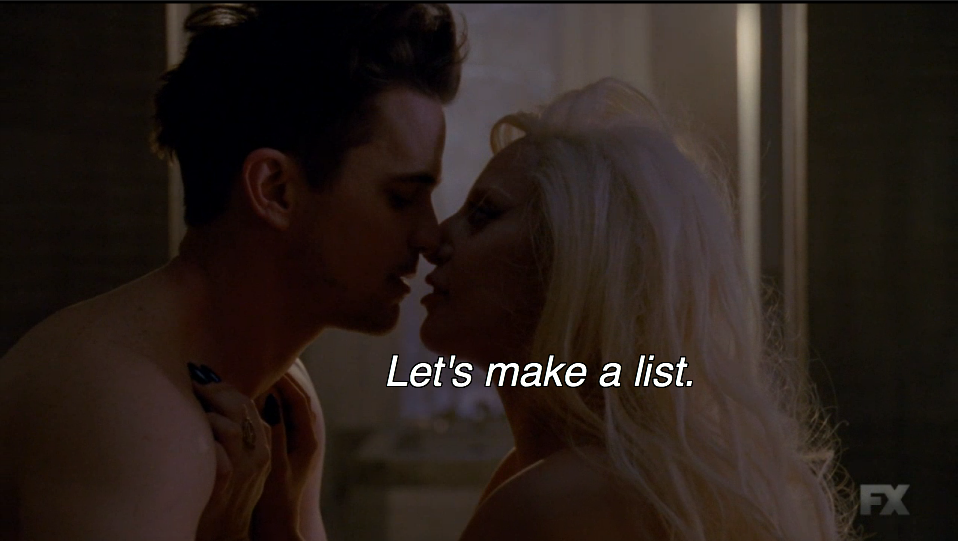 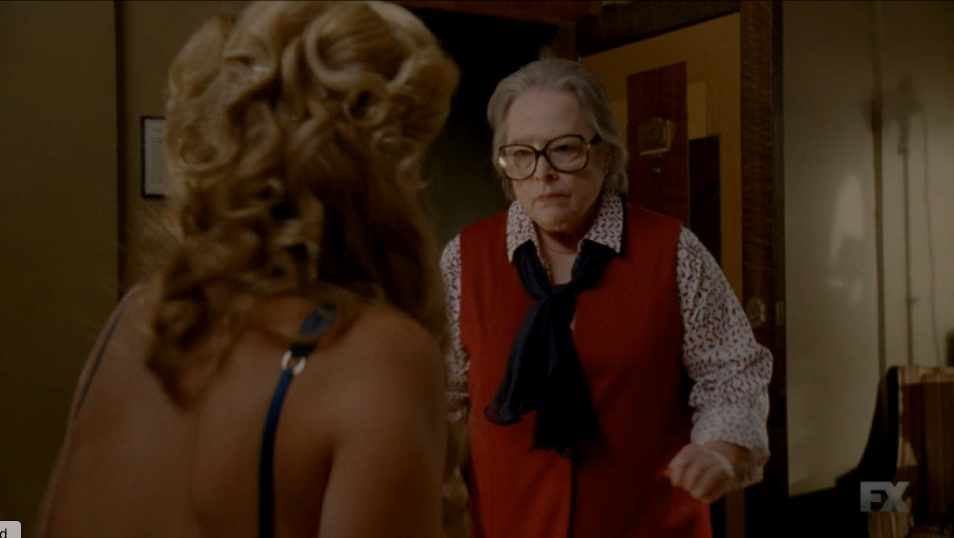 Donovan walks into the room to find Iris draining the actress’ blood Elizabeth Báthory style, and is amused and overjoyed at his mother’s newly find zest for life.  Iris warns him that he may be in danger; she told Elizabeth that Ramona Royale tried to kill Batholomew, and she’s worried that the Countess knows the three of them are in cahoots.  Donovan assures her that Elizabeth knows nothing of the sort– she thinks they’re back together.  Donovan goes on to tell his mother that “the less [she] knows, the better.” He then proceeds to kick in the bathroom door where the male porn actor is still hiding. 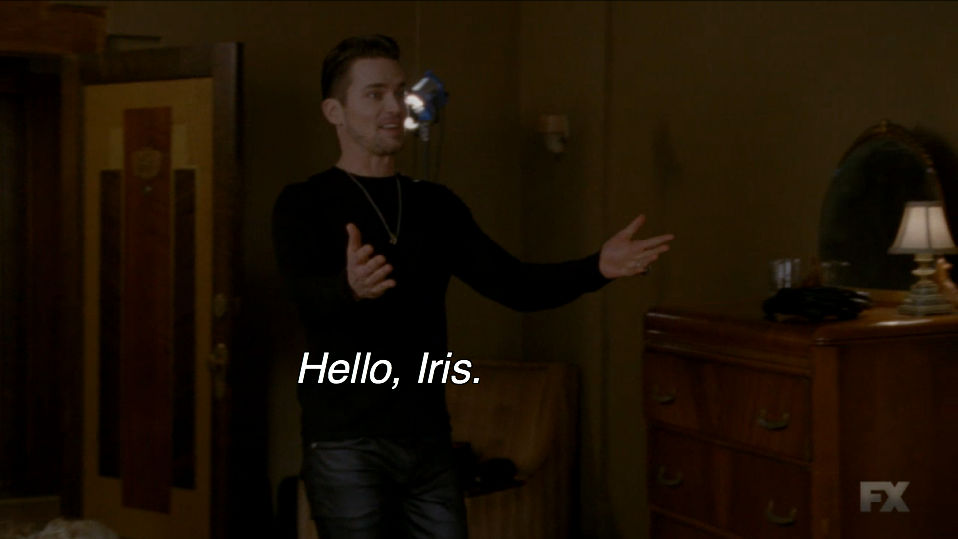 Meanwhile, Elizabeth has hired a contractor to reseal the wall with an impenetrable door.  She says she wants to make a secure archive for Will Drake’s earlier work, and that it’s a wedding present.  She tells the contractor that she expects her new addition to be completed within the next 24 hours.  When the contractor protests, claiming that such a feat is impossible, James March makes an appearance, quoting Miguel de Cervantes.  James assures the contractor that Elizabeth’s wishes can absolutely be accomplished in the time frame that she requires.  But Elizabeth is less than pleased.  She starts screaming at her late husband, furious at his betrayal of imprisoning Valentino and Natasha.  James doesn’t quite understand why Elizabeth is still upset.  It seems that the two of them are cut from the same cloth.

We then revisit Ramona Royale, who is fabulous as always, dressed to the nines and wearing Louboutins.  Donovan has brought the porn actor to her home as a gift, citing the common social rule of not showing up to someone’s home empty handed.  Ramona is angry with him; she thinks Donovan is too weak-willed to help her exact revenge.  Donovan tells her that Elizabeth took him back, and that he’s addicted to her, which is his new motivation to get rid of her.  He tells Ramona that he “slipped enough GHB into her drink to knock out an elephant,” and so now is the perfect time for Ramona to kill her.

We’re treated to another Ramona flashback.  After Elizabeth killed her boyfriend (that seems to be a pattern of hers), she went to go visit her aging parents, whom she hadn’t seen in ten years.  Her mother was on oxygen and her father was in the early stages of Alzheimer’s.  After her mother died, her father’s mental state quickly deteriorated.  Ramona tried to save him by turning him into a vampire, but the virus only preserved his physical condition, doing nothing to remedy the senility.  Ramona ended up euthanizing him.  Ramona then explains to Donovan that since her old movies were now available to stream for free online, people were starting to recognize her on the street again, reigniting her anger at Elizabeth for stealing her life. 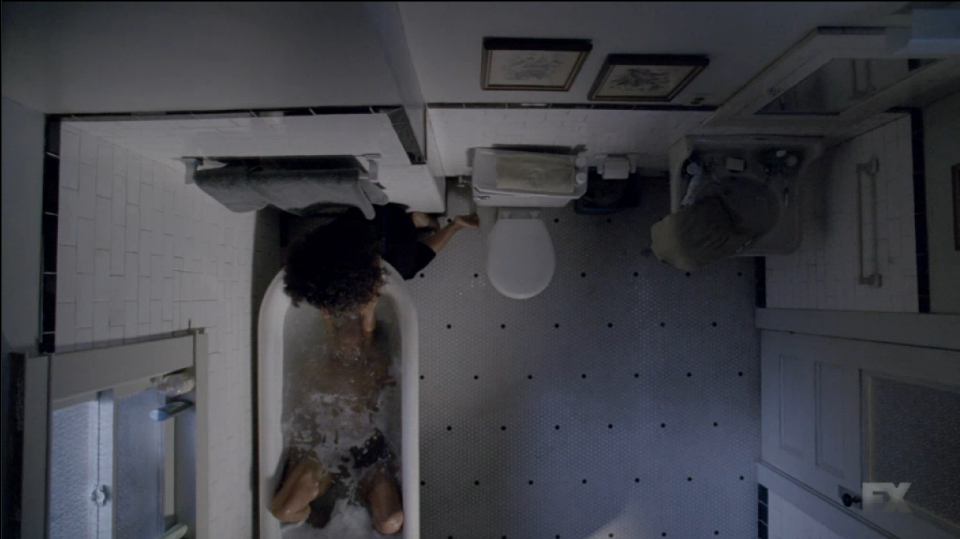 Hey, so, remember a few episodes ago, Alex saved that measles-ridden kid Max by turning him into a vampire, and he proceeded to infect his entire class, causing a Children of the Corn-esque massacre upon the school’s faculty? Well, the kids are still at large.  They’re the ones who killed all those homeless people.  Alex tracks them down.  They’re in a house with a pile of murdered, bloody adults, and a freshly killed pizza delivery boy.  Alex tells them that they need to stop this wanton killing spree, because the police are looking for them.  Turns out, all of the kids killed their parents and are digging this adult-free and rule-free lifestyle.  Well, most of them are, anyway.  Three of them, including Max’s girlfriend Madeline, aren’t so thrilled and haven’t fed in four days– and they’re feeling sick because of it.  Alex tries to take charge of the situation and bring the kids back to the Hotel Cortez with her.  Max and his friend Jimmy resist and lead everyone out of the house to escape detection from the soon-t0-come arrival of law enforcement. 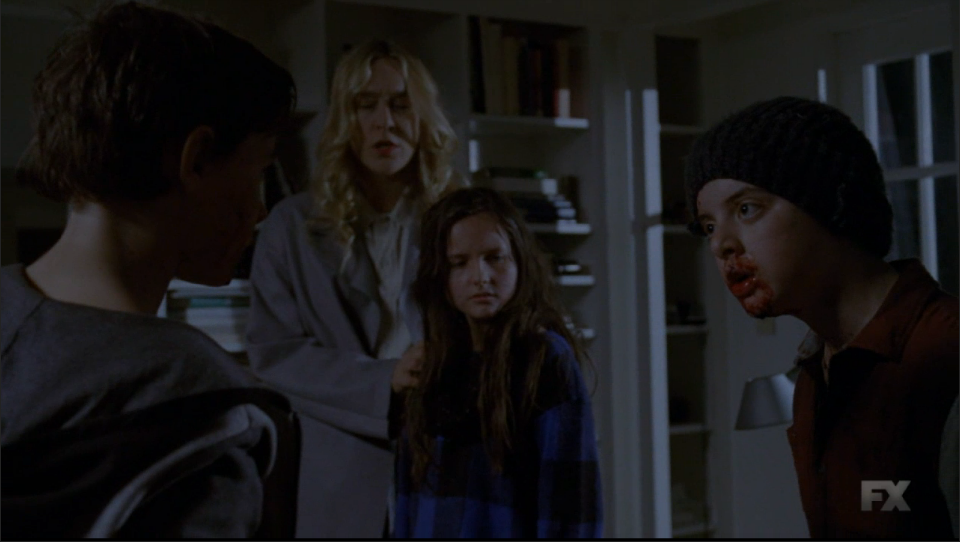 Back at the Hotel, Elizabeth slumbers in her bed, and Donovan leads Ramona into her bedroom to make the kill.  But, surprise surprise, Elizabeth was only pretending to be sleeping, and Donovan was only pretending to uphold his alliance with Ramona.  He tases her and enlists Iris to help him bring her into Elizabeth’s newly created hidden chamber, complete with video cameras.  He locks Ramona into a standing cage and and tells Iris that he is, in fact, back together with Elizabeth.  Iris pleads with him to recognize the monster that the Countess is, but Donovan isn’t hearing any of it. 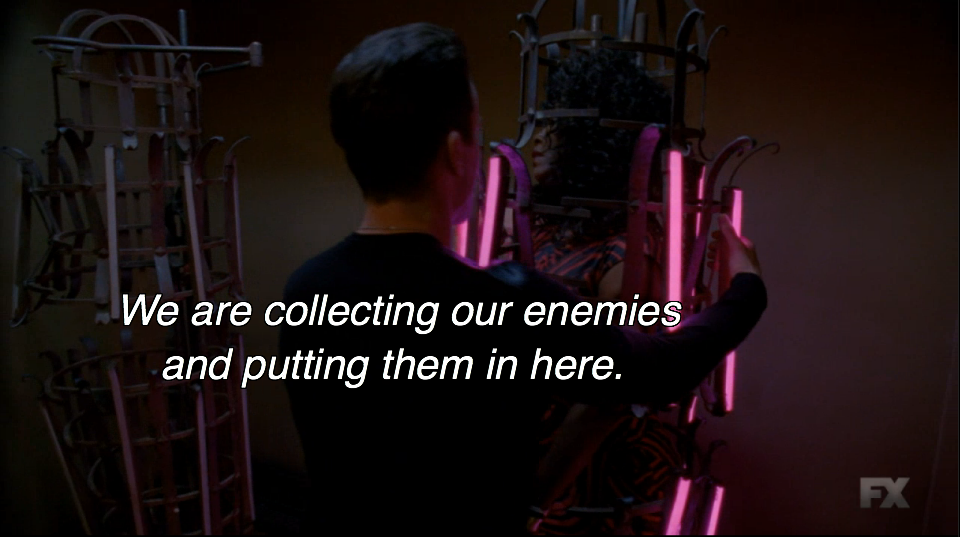 We then move to Elizabeth and Valentino, in the latter’s motel room.  He is upset because the world is too different for him to function.  He misses old Hollywood (don’t we all?).  Natasha, on the other hand, loves the modern world.  Elizabeth gave her a credit card, which Natasha has apparently been using to shop to her heart’s content and take expensive Uber rides around the city.  Elizabeth doesn’t mind that Natasha is costing her a fortune– she wants Valentino all to herself.  She only loves Natasha because Valentino loves her, and strongly hints that Natasha’s undead life will soon be over. She then tells him that she plans to turn the Hotel Cortez into a “fortress against the modern world.” 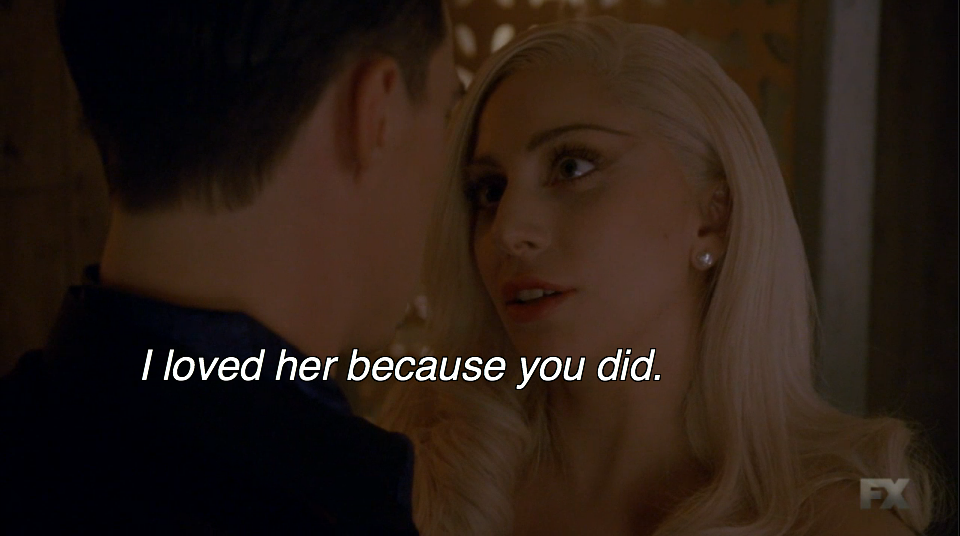 The next scene is Elizabeth’s wedding.  It’s a tiny, intimate ceremony, just how Elizabeth wanted it.  And who’s the witness? Liz Taylor.  When the justice of the peace asks if anyone objects to the union, Liz speaks up and says that the Countess “is a bitch with no conscience, no mercy, and no soul.”  Elizabeth chuckles and tells the justice to ignore her.  “She drinks,” she says.  The ceremony is complete, the bride and groom kiss, and Lachlan is excused to go upstairs.  Elizabeth also leaves to change out of her gorgeous, off-white, lacy wedding gown, and into her traveling clothes to go on her honeymoon.  Will goes to the bar to pour himself a drink, and Elizabeth gives her bouquet to Liz and tells her that she hopes that she finds love. 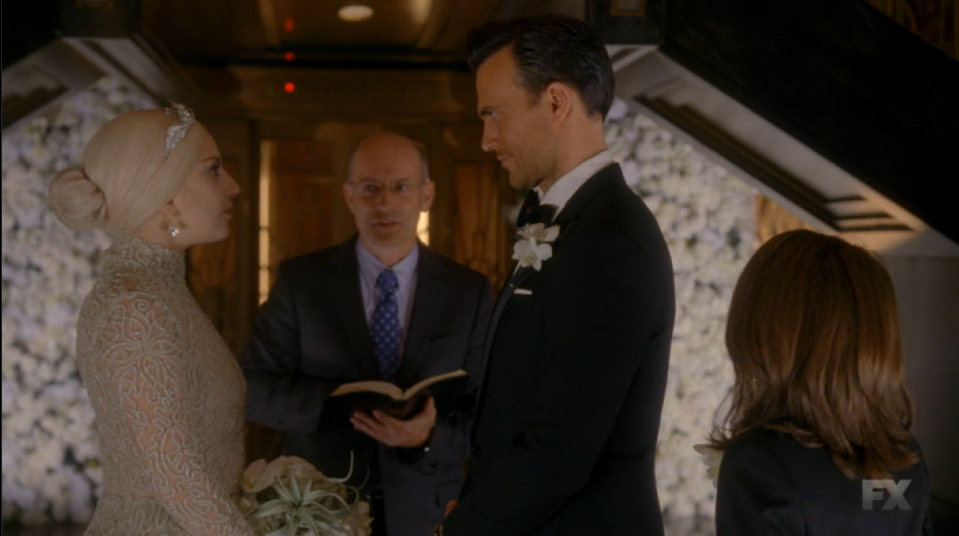 At the bar, Will is joined by James, who introduces himself as a longtime resident of the hotel.  They drink a toast to Will’s nuptials, and James commends him on his progressive, blended family.  Will thinks that James is talking about Elizabeth taking on the role of a mother in his son’s life.  James, however, is not. 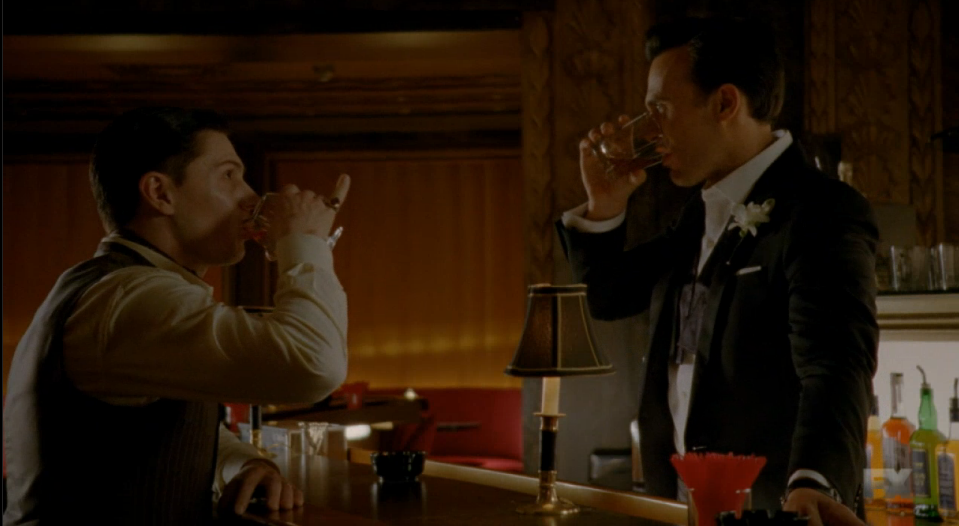 He leads Will to the nursery and shows him Bartholomew in his cradle.  “What the hell is that thing?” Will exclaims.  Elizabeth walks in, and is terribly offended to hear her latest husband speak that way about her baby.  She tells Will that she was going to kill him in Paris, but now can’t bear the thought of traveling with someone who would dare speak about her child like that.  She knocks Will out with one of Batholomew’s toys. 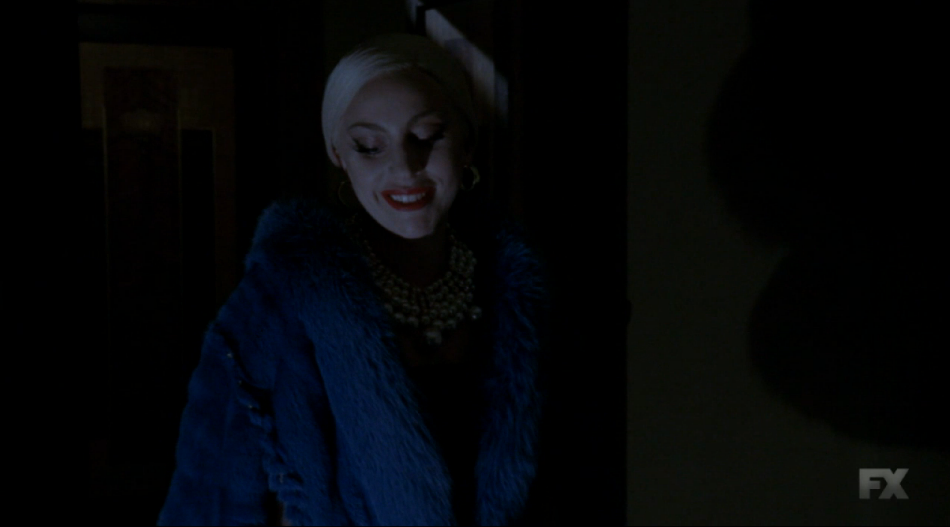 Will wakes up in the Countess’ chamber to find Ramona trapped in her cage.  She convinces him to help her out, and, not being a psychopath like some people, Will releases her.  He walks around the chamber, screaming for help, and all of a sudden, Ramona cuts his throat and starts to feed on him.  Miss Ever appears, and, as predicted, Will reaches for her for help, but she smiles and watches him die.  Countess Elizabeth, meanwhile, watches the whole thing on CCTV, from the comfort of her bedroom. 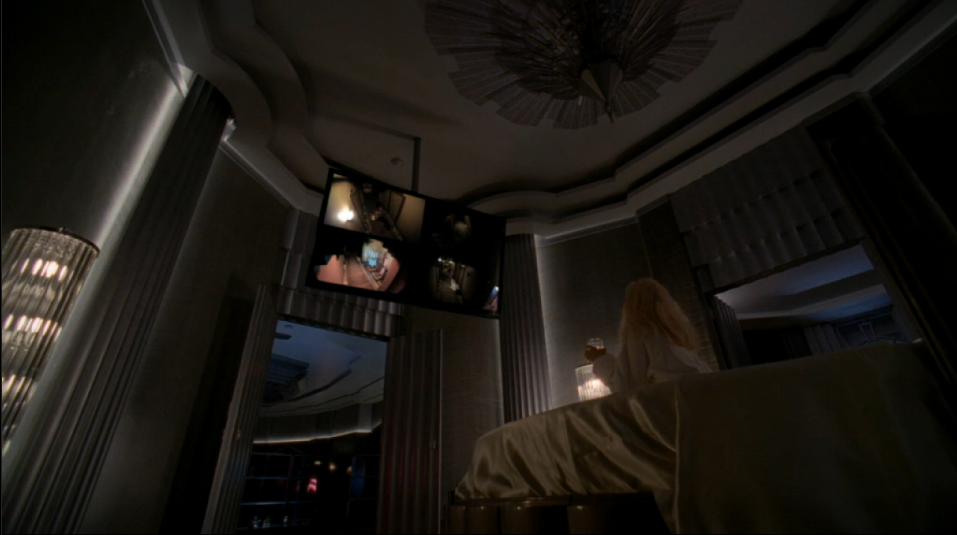