Silence can be killer. 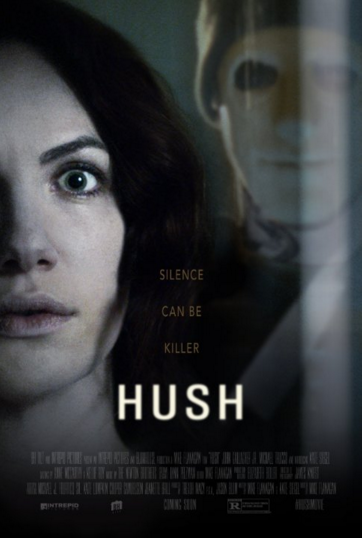 When you’re home alone, do you ever get the feeling that someone is watching you?  I’m sure you have.  And I’m sure you’ve checked to make sure all of your windows and doors were securely closed and locked.  Then you’ve spent the rest of the night listening closely for any sign of a home invasion, right?

But what if you were deaf?

The upcoming thriller titled Hush tells the harrowing tale of “a deaf woman [who] is stalked by a psychotic killer in her secluded home.”

Hush was written by Mike Flanagan and Kate Siegel.  Flanagan directed the film, and Siegel stars alongside John Gallagher Jr., Samantha Sloyan, Emma Graves, and Michael Trucco.  Hush was filmed in a mere 18 days, and was coproduced by Trevor Macy through Intrepid Pictures and Jason Blum, through his company Blumhouse Productions.

The film premiered last month in South by Southwest, and will be released to Netflix on April 8th.  Stay tuned for our review, and in the meantime, check out the heart-pounding trailer for Hush!