The Conjuring 2  is not to be missed. 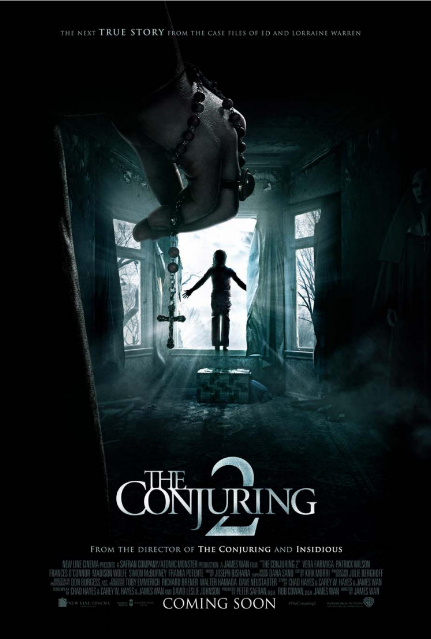 Yesterday, after a year of waiting and stalking James Wan’s Instagram account, The Conjuring 2 was released to theaters in the United States. You saw the trailers.  You saw the featurette with the real people who experienced the Enfield Poltergeist.  And now, you need to get yourself to the cinema to see the film.

The film, cowritten by Wan, Carey Hayes, Chad Hayes, and David Johnson, focuses on the Hodgsons: a working class family in the London borough of Enfield, consisting of four children–Margaret, Janet, Billy, and Johnny–and their single mother, Peggy.  They discover that their home has been invaded by a malicious spirit, which sparks a media frenzy.  Experts, both believers and skeptics, weigh in, and journalists visit the Hodgson residence to try to capture paranormal activity on camera.  The attention only makes the spirit angry, and the situation escalates.  The big guns– Ed and Lorraine Warren– are called in to investigate.

In the interest of being spoiler-free, I won’t go into details about the rest of the movie, except to say that it has all the elements of a good haunted house story.  Things go bump in the night and disembodied voices are heard.  Furniture flies and slides around and toys move by themselves.  Janet is the primary target of the poltergeist and is possessed several times (this isn’t a spoiler– it was shown in the trailer).  Meanwhile, Lorraine must conquer her own demons in order to save both Peggy Hodgson’s family and her own.

The visual aspects of The Conjuring 2 are nothing short of spectacular.  Both the poltergeist and the demon are terrifying to look at.  And although it is neither supernatural nor frightening, the backdrop of 1979 London (the buildings, the furniture and amenities in the Hodgson’s house, the film equipment, and the costumes worn by the cast) is executed perfectly.

Child actress Madison Wolfe steals the spotlight as Janet Hodgson, delivering a chilling performance that swings between vulnerable and, to creepy, to downright horrifying, all while nailing a British accent.  She is countered by Frances O’Connor, whose portrayal of Peggy is sympathetic and relatable.  They are supported by Lauren Esposito, Benjamin Haigh, and Patrick McAuley, who give equally great performances.

Vera Farmiga and Patrick Wilson reprise their roles as Ed and Lorraine Warren with such consistency from The Conjuring, that it’s almost as if they had stayed in character for three years.

Finally, we need to discuss the format and pacing of this film.  James Wan pays great attention to detail and takes pains to properly introduce us to the Hodgsons.  He takes the time to show Janet getting into trouble at school and then commits several scenes to showing the close relationship between the four siblings and their mother.  Wan is also deliberate in establishing Peggy’s character: a newly single mother, struggling to make ends meet while holding her family together.  She’s stressed out, but she loves her children and will do everything in her power to protect them.  Wan also devotes minutes to developing a report between Janet, Lorraine, and Ed.

These are the scenes that make The Conjuring 2 such a great horror film.  Wan makes us empathize and root for the characters.  He makes us care about their fates rather than just tuning out until the jump scares (which are excellent, by the way).  In this sense, The Conjuring 2 is comparable to classic horror movies, such as The Exorcist and Rosemary’s Baby.  Taking the time to explore the emotional lives and motives of characters are hallmarks of a good storyteller, and James Wan has certainly established himself as such.