Scream aired on a different day than usual this week.  Confusing, we know.  Here are all the gory details: 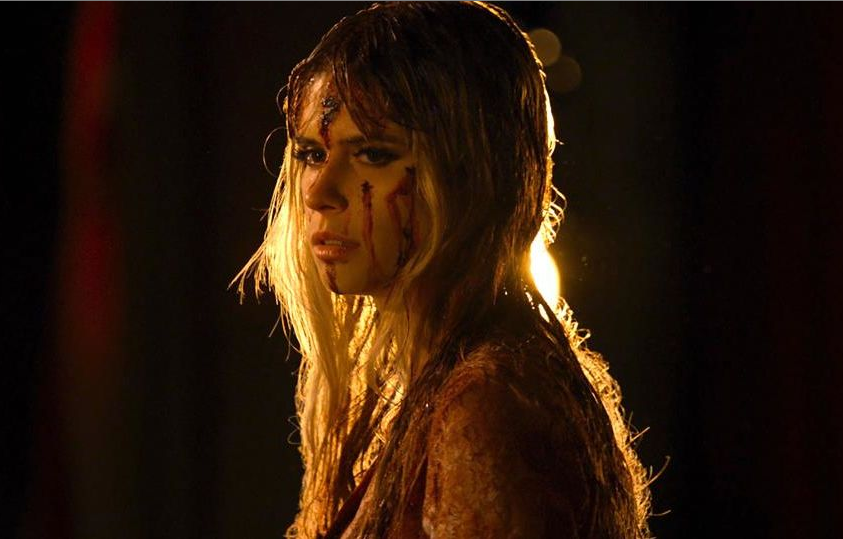 Last week’s Scream ended with a…well…you know…as Jake’s mangled, decomposing body was dropped from the ceiling in the auditorium and landed at Brooke’s feet.  The police arrive and students flood the halls as exit points are cut off and the auditorium is declared an active crime scene.  Emma and Audrey are permitted by their psych teacher, Miss Lang, to enter the auditorium to support Brooke.  Maggie, who, if you remember, is a medical examiner, is taking crime scene photos and coaching Brooke through the process.  Sheriff Acosta places the school on lockdown, and Emma is led away by a police officer, who informs her that she’s on a list to be questioned.  She’s told not to worry– a lot of people are on that list.  One of whom is Noah, who tells the sheriff his theory that Piper’s accomplice wants to finish what she started.

Audrey stays with Brooke as she finishes up the photoshoot.  They go to the locker room so that Brooke can get her boyfriend’s blood out of her hair.  She tells Audrey that she was texting with Jake the night before, and doesn’t understand how this could have happened.  Audrey of course is confused about the texts since Jake’s been dead for quite some time now.  Brooke realizes that Jake’s killer was probably the one sending the texts.  While she’s getting changed (into a cheerleader’s uniform because apparently it’s the only spare bit of clothing in the entire school ), Audrey sends a text to Jake’s phone, telling the killer that they’re going to hell.

In the library, Emma meets up with Kieran, Noah, and Eli.  She feels her backpack vibrating and thinks it’s a text from Maggie.  She goes off to answer the message (with Eli creeping in the background), but discovers that it wasn’t her phone vibrating… someone has slipped Jake’s phone into her backpack.

Emma freaks out to Kieran and Audrey about the discovery.  She thinks that she should take it to the police.  Audrey, on the other hand, thinks that would be a bad idea.  After all, the killer is playing with them.  It’s a sick game of life or death, and all of them know that (in horror movies) when cops are involved, things tend to get worse.  Brooke is sequestered in Miss Lang’s classroom, and her father becomes the only parent to be allowed in the building.  Being the mayor certainly has its perks. Meanwhile, Hayley, the girl who pranked Audrey in the first episode, is led away to be questioned.

The police start searching lockers and students are freaking out.  Especially Kieran.  He, Noah, Audrey, and Zoe conspire to sneak out of the library to help Kieran get to his locker without being caught.  He tells Emma that there’s something in his locker that he would rather the cops not see.  Vague, but okay.  Audrey fakes being sick and Zoe convinces a female officer to escort them to the ladies’ room.  It gives Noah and Kieran the perfect opportunity to zip out of the library and tear through the hallway, avoiding the adult authorities, Breakfast Club-style.  He grabs his backpack from his locker, but is intercepted by police officer, who, of course, demands to see the contents of his bag.  Kieran hands it over, and the officer finds his gun.

Acosta questions Kieran about this.  Kieran explains that the gun belonged to his father and he keeps it with him to protect himself and his friends.  Acosta plays Good Cop, and tells Kieran that he totally understands and isn’t going to arrest him.  After all, he was buds with Kieran’s late dad.  All he wants is information.

Eli offers to dispose of the phone for Emma, since she’s already been through enough.  Next thing we know, Kieran is brought back into the library, and Emma is summoned.  The escorting officer holds out an evidence bag, and Emma has no choice but to drop Jake’s phone in.  Yes, that’s right: Kieran dimed on her.  During Emma’s interview, Acosta immediately starts talking about her PTSD and her stint in mental health facilities.  Emma tells him that the killer is targeting her again, and the sheriff says that he believes her.   Well, he believes that she believes she’s being targeted.  As she’s being taken back to the library, the sheriff tells one of his underlings that he’s trying to orchestrate a Stockholm Syndrome scenario.  Meanwhile, Noah is still sneaking around in the hallway, trying to get back to Home Base.

At the library, Emma confronts Kieran about ratting her out.  Eli joins in and tells Emma she has to be careful about who she trusts.  Kieran doesn’t like his creeper cousin butting in like that.  The gang then hears Hayley talking smack about Emma, and Emma confronts her.  Hayley tells her that people always die around her, and that none of her friends are safe.  She also insults her family by saying that whenever there’s a killing in Lakewood, a Duvall woman is always in the middle of it, leading Emma to slap her across the face.

Hayley attacks her back, the two are broken apart by their friends, police officers, and Miss Lang.  They’re separated, and Miss Lang brings Emma into an empty office.  She tries to calm her down by explaining that she’s experiencing multiple PTSD triggers.  Meanwhile, Audrey is on the phone with Noah.  She’s still suspicious of Stavo, who is doodling murder drawings on his tablet.  Audrey discovers that the emergency door is disengaged, and she tells Noah that she can sneak him in if he goes to that door.

Acosta questions a clearly traumatized Brooke, who is accompanied by her father (as is her legal right, since she’s a minor).  She tells him about sneaking into the school’s swimming pool with Jake and having a fight with him about her dad.  She also tells Acosta about Branson. She’s then allowed to see Jake’s body one last time.  She goes into the auditorium just as Maggie is bagging him up.  Maggie tells her that it looks like Jake has been dead for at least three days.

Back in the office, Emma is alone and trying to calm herself down.  She gets a call from an unknown number.  Three guesses who it is.  She tries to leave the office, only to find that the doors are locked, and the killer is at the window.  Emma breaks the window with a chair, and finds that the killer is nowhere to be found.  She leaves the office, cutting her arm in the process, and vows that she’s not going to go through this again.

Acosta dismissed Maggie from the case, on the grounds that she’s too emotionally attached and gave privileged information to Brooke.  When she leaves, Acosta gains access to Jake’s phone.  Noah gets into the library, and Audrey pulls him aside to tell him that she thinks that Stavo is behind everything.  She lets slip that she’s been getting calls and that people are dying.  Noah is confused: so far only one person died (that they know of), and he thought that Audrey only got a threatening text.  She tries to cover her tracks by diverting his attention to Stavo.  She confronts him loudly and asks what he’s drawing.  He tries to get her back off, but she snatches his tablet and shows his disturbing art to everyone in the room.  It incites mass hysteria, and, despite his attempts to explain it, two or three jock-types jump him.  The police come to break it up, and Emma arrives, in a daze, and with a bloody arm.

At the end of the initial investigation, parents are reunited with their children.  Emma tells Acosta and Miss Lang that she had a panic attack, explaining the broken window and cut arm.  In the library, Audrey tries to apologize to Stavo and offers to pay to repair or replace his broken tablet.  He tells her to stay the hell away from him, or else he’ll break something that she loves. Noah steals Audrey’s phone, cracks her security code, and goes through all of the text messages, videos, and pictures that the killer sent her.