Still feeling the effects of your 4th of July weekend and miss Scream? Us too, but we powered through it to write you all a nice recap. 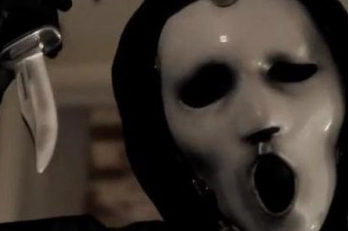 In the aftermath of the discovery of Jake’s body, we get a snippet of Noah’s latest podcast episode about grief and loss alongside clips of Brooke and Audrey dealing with their own grief and loss.  Brooke’s loss is Jake, and she copes by stabbing her bed with a pair of scissors.  Audrey’s grief is her sanity and security, and she relieves her stress by working out.  Noah’s latest crime-solving board is revealed: he has listed Audrey as the main suspect.

Kieran drops by Emma’s house to apologize for ratting her out to the police.  She comes clean about the calls from the killer– there was another one that morning.  She goes to Noah’s house to fill him in on the new development and asks to see his progress on figuring out who Piper’s accomplice was.  He hesitates, but eventually shows her.  Emma is shocked that Audrey is the suspect, and insists that it couldn’t be her.  Keep in mind, Noah still has Audrey’s cell phone with the texts from the killer.

Emma’s next stop of the day is Brooke’s house.  She helps Brooke dispose of her mangled sheets, and Brooke tells her that she’s certain that Branson is behind Jake’s murder.  Emma doesn’t think it’s plausible, but Brooke is convinced.  Branson was obsessed with her, and let’s be honest: adults who pursue teenagers are probably capable of more than just stalking and general creepiness.

Downstairs, Brooke’s father, Mayor Maddox, is arguing with Sheriff Acosta– he’s not going to allow him to interview Brooke again.  Acosta is annoyed and tells Maddox that he can’t access the contents of Jake’s phone because it’s encrypted.  Subsequently, this is shown to be a lie when Acosta easily opens Jake’s phone and rereads the texts, including a vaguely threatening one from Maddox.

Noah shadows Audrey for a bit until she catches him in the act.  She’s annoyed and wants to know why he’s following her.  Obviously he can’t tell her the truth, so he makes some excuse about needing to buy a bike.  While she’s distracted, he slips her phone into her backpack.

Noah goes to Emma’s house and tells her about Eddie– the desk clerk who was supposed to give him a lead about Piper’s accomplice.  They text him a picture of Audrey to see if he recognizes her.  They get a text back, with an invitation to meet up in person at the fairgrounds.  It isn’t Eddie who’s texting them.  Remember? Eddie’s dead.

At a bar, Maddox runs into a woman he met briefly at the school during the lockdown. Stavo meets up with Brooke at the café.  She asks him to do her a favor and sneak around the police precinct to look for any dirt on Branson. Stavo agrees and embarks on his quest right when Kieran is being questioned by Acosta.  The sheriff tells Kieran that he and his friends should cooperate with law enforcement– after all, if they had been forthright with the authorities the last time, things might not have gotten so out of hand and Kieran’s father might still be alive.  Ouch.

Stavo reports back to Brooke.  Branson has an alibi for the time frame of Jake’s murder: he was with Miss Lang.  Apparently the two are dating.

Audrey goes to a Best Buy-type store to buy a new cell, only to find that her phone is in her backpack.

At Emma’s house, she and Noah plan that night’s excursion to the fairgrounds to meet with Eddie.  Maggie walks in and tells Emma in no uncertain terms that she is not to leave the house that night.  You know, since there’s a killer on the loose.

Audrey goes to the café to process this, and is approached by Stavo, who insists that she take a look at his murder sketches.  He’s making a graphic novel about the Lakewood Murders and compares himself to Goya and Caravaggio.  He also tells her that he knows that she’s still suspicious of him, and that he, in turn, doesn’t trust her.

Brooke asks Miss Lang to meet her for a quick therapy-slash-vent sesh.  Tearfully, she tells Miss Lang that the night Jake was murdered, she was with Branson, and she’s wracked with guilt about it.  It’s a lie, but as it turns out, so was Branson’s alibi.  Miss Lang calls him from her car, and leaves a “we need to talk” voicemail.  Brooke, on the other hand, is speaking to Branson on her phone, telling him that she needs him and wants to have sex with him again.  When the trap is in place, Brooke smugly smiles.  Get it, girl.

Maddox has taken the mystery woman back to him place.  She thinks he wants to sleep with her, but he has different plans: he has an “off the books” job for her.

That night, Emma perpetuates the age-old tradition of sneaking out of the house against her mother’s wishes.  She gets a flat tire about a hundred feet from her house, though, and calls Noah.  Or, she tries to.  He’s not picking up.

At the fairground, Noah laments his lack of phone service.  He’s been texting Eddie to find out exactly where he is, but to no avail.  In the grand tradition of horror movies, Noah ventures into the fenced off area where the attractions are, and walks into the funhouse, which is full of mirrors.  If you’ve ever been to a funhouse, you know that the Hall of Mirrors is a horrible invention that is shamelessly creepy.  Before he goes any further into the funhouse, Noah thinks better of it and leaves, muttering “nope” under his breath.  The kids call it “noping out.” He gets into his car to leave, but the killer is in the back seat.  He puts a cloth over Noah’s face (presumably soaked in chloroform), and he passes out.

Brooke meets Branson in a hotel room.  They start to make out and Brooke ties him to the bed.  Branson’s into it, until Brooke pulls out a pair of scissors.  She tortures him for a minute or so, until Branson admits that the night Jake died, he was supposed to meet him in that hotel.  Jake was going to pay Branson $10,000 to stay away from Brooke.  Brooke isn’t totally convinced that Branson didn’t murder Jake, and threatens to castrate him.  She has a change of heart, and leaves him tied to the bed, blindfolded and gagged.

Kieran helps change Emma’s tire and tries to get her to cooperate with the police.  It doesn’t go over too well, since Emma is confident that she’s better at crime solving than the Lakewood PD.  Still Kieran makes Emma promise that she won’t go to the fairgrounds.

Brooke goes to Stavo’s house to talk about her lack of closure.  Torturing her ex didn’t resurrect Jake.  Before she got there, Stavo had a disturbing Silence of the Lambs moment with his reproduction of the killer’s mask.  It was also revealed that he has  a tattoo of a spine running along his own spine.  Might be useful information later.

Noah wakes up tied to a bumper car and discovers that Audrey is tied to the car behind him.  He figures he’s about to be brutally murdered, so he comes clean about the phone and his knowledge that Audrey knew that Jake was dead all along.  She defends herself, saying that she panicked and didn’t know what to do.  Noah’s more hurt than anything else.  He’s her best friend, and best friends are the ones you call when you find a corpse.

Emma arrives at the fair grounds and finds Noah’s empty car.  She ventures into the fenced area, with the killer lurking in the background.

Noah keeps himself occupied by making deathbed confessions.  He never liked his cat, he lied about his favorite movie being Terminator (his favorite flick is Psycho), and he’s been harboring feelings for Audrey that were brought to the surface when they kissed.  Audrey tells him that she loves him, but not like that.

Emma starts to go into the funhouse and calls out for Noah before thinking better of it.  Noah starts to yell for Emma, and Audrey freaks out.  Noah tells her about coming to the fairgrounds to meet with Eddie.  Audrey panics and tells Noah that Eddie’s dead.  She confesses that she staged Noah’s kidnapping to convince him that she was innocent.  She cuts Noah loose and the two run out of the funhouse, now that they realize the full extent of the danger they’re in.

Emma sees the killer, and starts to run.  She finds Audrey and Noah, and a split second later, Kieran joins them– he followed Emma to the fairgrounds.  The four start to run for their lives

The four survive the night.  Emma drives back home, with Kieran following to make sure she actually makes it through the door.  He’s upset that she went to the fairgrounds, and she’s annoyed that he doesn’t trust her.

At the precinct, Acosta looks over his files, and an officer gives him an update about the emails that Emma’s dad received from Riley’s email account.  The IP address was traced to Emma. Kieran comes in, and wants to talk about– guess who– Emma.

Noah starts to record a new podcast when Audrey comes in.  She has a confession: she was responsible for Piper coming to Lakewood.  Audrey says that she felt like an outsider and wanted to make a documentary about Brandon James. She had originally written to Piper to ask her for help researching the story.  Audrey blames herself for everything and thinks that she deserves every torment that she’s faced.  Noah assures her that it’s not her fault.  He forgot to turn the podcast audio off, and it captures everything Audrey says.

Back at the hotel, Branson is still restrained.  The killer comes in and cuts off his hand.  He then cauterizes the bloody stump with a hot clothing iron.