John Wayne Cleaver is dangerous, and he knows it. 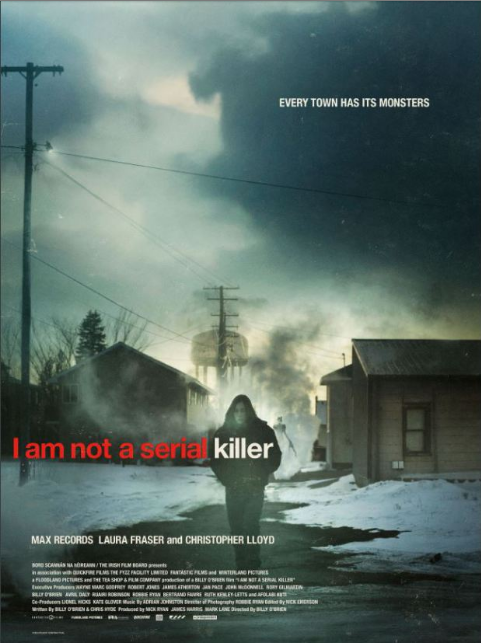 There’s a new supernatural thriller about to be unleashed.  Billy O’Brien’s upcoming film I Am Not a Serial Killer debuted at SXSW this past March before screening at the Duluth Superior Film Festival, and then at the Melbourne International Film Festival.  I Am Not a Serial Killer was co-written by O’Brien and Christopher Hyde, and is based upon Dan Wells‘ novel of the same name.

I Am Not a Serial Killer tells the story of John Wayne Cleaver– a sociopathic teenager who finds himself heavily involved in the investigation of a serial killer.

John Wayne Cleaver is dangerous, and he knows it.

He’s spent his life doing his best not to live up to his potential.

He’s obsessed with serial killers, but really doesn’t want to become one. So for his own sake, and the safety of those around him, he lives by rigid rules he’s written for himself, practicing normal life as if it were a private religion that could save him from damnation.

Dead bodies are normal to John. He likes them, actually. They don’t demand or expect the empathy he’s unable to offer. Perhaps that’s what gives him the objectivity to recognize that there’s something different about the body the police have just found behind the Wash-n-Dry Laundromat—and to appreciate what that difference means.

Now, for the first time, John has to confront a danger outside himself, a threat he can’t control, a menace to everything and everyone he would love, if only he could.

The film stars Max Records, Laura Fraser, Christopher Lloyd, Karl Geary, and Bruce Bohne.  The official trailer dropped yesterday, and it looks horrifying in the best way.  The trailer shows off dark and broody cinematography, bleak landscapes, and brutal violence.  Definitely something worth seeing.  I Am Not a Serial Killer will be released to select theaters on August 26th, as well as to Video On Demand platforms.  Watch the trailer below, and check in with us next month for our review!