Couldn’t stay awake long enough to watch Scream?  That’s okay; not everyone can work the graveyard shift.  Here’s what happened this week: 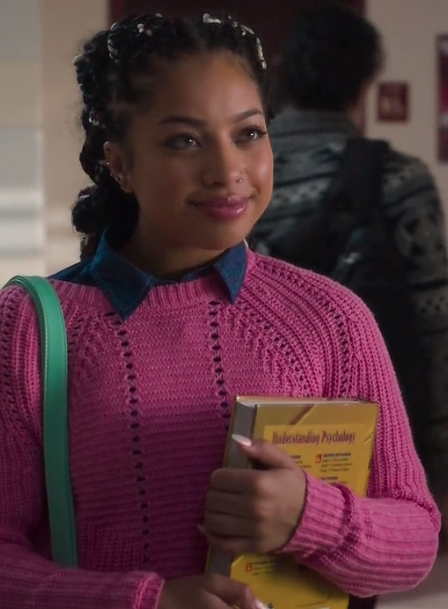 The episode opens with Creepy Eli.  We watch him make coffee, put on a pair of aviator sunglasses, and watch a presumably married couple sleeping in their bed while holding a knife.  He then, with the calm composure of a sociopath, eats breakfast and exits, leaving the couple to wake up to an open back door.

Emma’s morning ritual of coffee with Maggie is interrupted by two things: a phone call from Ms Lang, which she ignores, and a visit from Sheriff Acosta and his partner, which she can’t ignore.  Acosta wants to look through Emma’s computer because, if you’ll recall from last week, the emails sent to her father from Riley’s email account were traced back to Emma’s IP address.  After Acosta agrees that Emma may have a stalker, she tells him about the abandoned farm that was littered with her childhood photographs.

As it turns out, Audrey spent the night at Noah’s house.  Don’t worry; nothing happened between them.  Neither of them wanted to be alone after the fair grounds incident, so Audrey crashed at his place.  Audrey is tortured because she’s convinced that she ruined Emma’s life by bringing Piper to Lakewood.  Noah is confident that Emma won’t see it that way.  The two go to breakfast at the Grindhouse Café, and discover that Eli has taken Emma’s morning shift– it was apparently a last minute request.  At the café, Noah sees Zoe, who asks him to be her study buddy for an upcoming exam. Or rather, her “study buddy” since it’s obvious that Zoe wants to go on a date with him.

Emma goes to Kieran’s house to confront him about being an informant for Acosta.  She feels that he betrayed her, and honestly, her feelings are completely justified.  Speaking of relationship issues, Brooke runs into Audrey at the café and confesses that she “went full Hard Candy” on Branson and left him handcuffed to the hotel bed.  She even still has the key.  She feels guilty and embarrassed about her behavior.  Audrey assures Brooke that she doesn’t judge her at all.

Meanwhile, Acosta and his partner search the abandoned farm house.  Acosta finds a picture of Baby Emma holding a man’s hand.  The man’s face has been scratched out, and Acosta, after hiding the photo from his partner, calls someone on the phone and says that the situation is a lot worse than he thought.

Emma comes into work and vents a bit to Eli about Kieran talking about her to the police.  Eli doesn’t make excuses for his cousin, but he does tell Emma that Kieran tends to bury his feelings.  He cites the death of Kieran’s mother and stepfather; the night they died, Kieran had a fight with the latter, and harbors a tremendous amount of guilt.

Zoe drives Noah out to the lake for their “study session.”  It’s revealed that Zoe wasn’t in school last semester during Piper’s murderous stay in town.  She tells Noah that she was at the Space X Program, but something’s off about her story: Noah has applied to that program six times, and knows that it takes place in the summer, not the fall.  He calls Zoe out on it, and she admits that she lied.  She confesses that last year, she felt overwhelmingly lonely and “did something stupid” which led her mother to find her a therapist and keep her out of school.  Zoe also confesses that the “study session” was just a ruse to get Noah alone– she’s come prepared for a date.  Noah gets a call from Audrey, which he ignores.

Back in town, Audrey leaves Noah a message informing him that if anything happens to her, Seth Branson is responsible.  She and Brooke are in the hotel, getting ready to free– and potentially fight– Branson.  But he’s not in the room.  His bed is immaculate, and all that’s left from his stay is Brooke’s eye mask and his watch.

Audrey doesn’t mince words: this is a bad situation.  Brooke agrees.  Her predicament is only made worse when Branson (or someone using Branson’s phone) texts her and summons her for a meeting in his old office at school– if she doesn’t go, he’ll file a police report.  Audrey freaks out and tells Brooke that she’ll go with her because, let’s say it together, Branson is a predatory creep.  As the two leave the hotel room, it’s revealed that the entire conversation was captured on a hidden camera.

At the lake, Zoe and Noah have changed into bathing suits (Zoe brought one for Noah) and start to make out by the water’s edge.  Zoe uses Noah’s phone to take a selfie, and sees that Audrey called Noah again.  She doesn’t mention this to him.

At the café, Ms Lang approaches Emma and apologizes for isolating her during the lockdown and triggering her “panic attack.”  Emma doesn’t want to talk about, and tells Ms Lang that she needs to give her some space.  Eli tells Emma that she needs to have some fun to get her mind off of everything, and invites her to go to dinner with him.  He flirts with her a bit by pulling on her apron strings, and Kieran walks in.  He sees Emma flirting back (a little bit), and leaves without anyone seeing him.

Ms Lang has retreated to her office and plays back a recording of Emma telling her to back off.  She has files of the Lakewood Six, and a drawer filled with audio tapes of secretly recorded conversations and dictated “chapters”.  Is Ms Lang writing a book about the psychological effects that the murders had on Emma and her friends? Or is something more sinister?

As they’re getting ready to go home, Noah tells Zoe that his parents will be away that night, and he invites her to come over.  She smiles and accepts.  Over the moon and brimming with anticipation, Noah goes to the drug store to buy condoms, and as he’s struggling to figure out exactly what to buy (since school-based sex education in the United States is abysmal), an officious store employee old enough to be his grandmother tries to help him.  It’s awkward as hell, but it’s the comic relief this show needs.

Brooke prepares herself for her meeting with Branson, and Audrey texts Emma, telling her that she wants to talk.  Immediately after she hits “send”, she receives a text from the killer threatening to show Brooke the video of her with Jake’s corpse if she doesn’t meet him/her at school.

Ms Lang tries to work on her book, or case study, or whatever it is, but loud banging sounds in the hallway are interrupting her flow.  She gets a call from an unknown number.  If you’re thinking it’s the killer, then, congratulations, you’re absolutely right! The killer taunts her about her attraction to Branson and tells her that he’s down the hall, and “not so handsy anymore.” She goes to investigate, only to find a wind-up toy pig on the floor.  She returns to her office and discovers that it’s been totally trashed.  She leaves the office again to come face to face with the killer.  He waves Branson’s severed hand at her.  She manages to get away for a solid minute, during which she stumbles upon Branson, who’s lying down in the hallway.  The killer quickly finishes him off by stabbing him.  Ms Lang runs up the stairs to escape, but she’s not fast enough.  The killer throws her over the railing.  Her body is found by a janitor.

Audrey and Brooke arrive at school, and Audrey convinces her friend to let her go in before she does to assess the situation.  Audrey enters and is greeted, frantically, by the janitor. His hands are covered in blood, and he’s waiting for an ambulance to arrive.  Brooke comes in, and the two are horrified to see Ms Lang bleeding on the floor.

Meanwhile, Noah impresses Zoe with his AV equipment and podcast set-up.  She sees an audio file titled “Audrey”.  She asks Noah if he could get them some “adult beverages”, and while he’s downstairs, she listens to the file (the one where Audrey tells Noah about her connection to Piper) and emails it to someone.

Noah and Zoe push past most of their awkwardness and get it on in the former’s bedroom.  Or, they’re about to, anyway.  Nothing R-rated happens, because Audrey bursts in.  Noah wants her to leave, but Audrey insists that it’s important.  Zoe makes her exit and Noah makes a snarky comment like “someone better be dying.”  Unfortunately, they live in Lakewood, where people die all the time.

Eli leads Emma to a empty model home and confesses that he likes to sneak into people’s houses.  He calls it “Goldilocks-ing”.  Most people would call it “breaking and entering”, but that might just be a matter of semantics.  They start to drink wine, and it’s revealed (to us) that Branson’s and Eddie’s bodies are stashed upstairs in the bathtub.

Audrey fills in Noah about what transpired in the school.  Ms Lang isn’t dead yet, and the odds that she’ll survive isn’t looking so great.  Audrey hypothesizes that the killer wanted to orchestrate another “let’s film Audrey finding a corpse” scenario.

At the model home, a shadowing figure runs across the lawn as Eli and Emma talk about Kieran.  Eli says that his cousin has reinvented himself and is completely different than how he used to be.  Emma starts to talk about her relationship woes, and Eli kisses her.  Emma rejects him.  Despite everything, she’s in love with Kieran.  Suddenly, the smoke detector starts beeping: the house is on fire.  The two manage to escape as the fire consumes the house.  Eli begs Emma not to call 9-1-1.  He has a history with the police, and thinks that they will be blamed for the destruction.  “Sometimes,” he says, “it’s better to just walk away.”

In the house, Branson opens his eyes one last time.  He realizes with horror that he survived being stabbed only to be burned to death.