Scream Episode 2×08: ‘Village of the Damned’

Did a rolling blackout make you miss Scream? Don’t sweat it.  Here’s what happened: 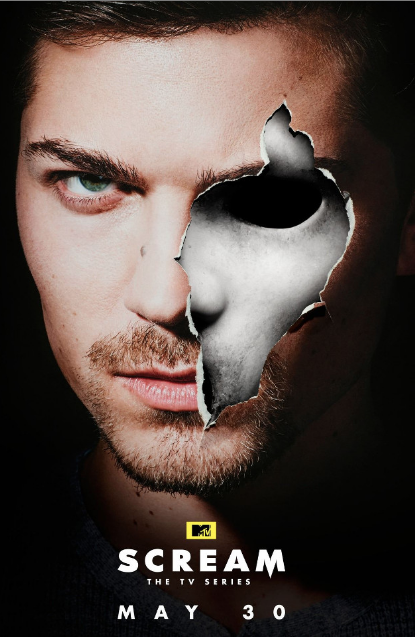 The episode opens with Noah recording his latest podcast and announcing that Lakewood is having a carnival to celebrate…something non-murder related.  During his monologue, we watch as Audrey wakes up to find the words “12 DEAD” written in blood on her ceiling.  As if that’s not bad enough, the blood is dripping on her face, and on her mirror is the message “NOBODY WILL FORGIVE YOU” written in even more blood.  She fills Noah in before the two head into school, and Noah urges her, yet again, to come clean about her involvement with Piper to Emma.

During homeroom, Mayor Maddox makes a guest appearance on the morning announcements to assure everyone that the carnival will be completely safe.  ‘Kay dude, totally convinced.  Between homeroom and first period, Noah, Stavo, Zoe, Audrey, and Brooke hang around the hallway and discuss how ridiculous it is to not cancel the fair in the wake of a new serial killer.  Brooke tells them all that she needs to be there to participate in the pageant– her dad had some property that burned down, and he’s rather upset about it, so he’s counting on her to not be another disappointment.  That piece of Maddox property was the same home that Eli and Emma broke into in the last episode. Speaking of which, Emma pulls Eli aside to talk privately.

In the police precinct, Sheriff Acosta examines blood spatter photos from Miss Lang’s tragic fall down the stairs, and goes through a box of her personal effects found in her office.  He discovers the tapes and field notes from her secret study of the Lakewood Six (or rather, the Lakewood Five).  He also finds a tape labeled “Gustavo Acosta”– his son.  He takes that tape and puts it in his desk for safekeeping.

Acosta can’t sit around the precinct all day looking into the attempted murder of a teacher, though.  There’s an open arson case to investigate.  He and another officer go to the burnt down house, and find…the charred corpses of Eddie and Branson.

Emma drives Eli to the neighborhood where the model home was and tells him that they need to ‘fess up about their little breaking and entering adventure.  Emma’s finished with lying to the police.  In Acosta’s office, she confesses to breaking into the house with Eli.  Acosta says he understands– model homes and neighborhoods are cool and weird and interesting to explore.  He asks Emma if she went through the entire house.  She hadn’t; she and Eli stuck to the living room.  Acosta tells her that the fire was definitely arson, and that she needs to be careful around Eli.  Apparently in his hometown, a girl got a restraining order against him because he snuck into her room.  Yikes.  After speaking to Acosta, Emma rejects Eli’s offer of going out to lunch, and acts a bit standoffish toward him.  When Emma leaves, Acosta asks Maggie to rejoin the case.  He needs help identifying the corpses, and they both want to protect their children.

At school, Brooke and Zoe sit in a public speaking class to prepare for the pageant they’re both in.  Neither is particularly interested in what the teacher has to say; Zoe is having an issue with the dress she bought, and Brooke doesn’t want to win anymore because the pageant queen, or “Lady of the Lake,” will be required to clean up litter for community service.  Brooke tells Zoe she wants to help her win.

Acosta starts to listen to the recording of his son.  It only takes about five seconds for Stavo to start talking about art and serial killers.  Exasperated and concerned for his kid’s mental health, Acosta goes home and starts to ransack Stavo’s bedroom.  Stavo walks in and is justifiably angry that his dad would violate his space and his privacy like this.  Acosta demands to know where the Brandon James mask is, and mentions some accident back in their hometown involving Stavo, his best friend, and a gun.  Stavo is adamant that he’s not the murderer, and challenges his dad by saying “if you think it’s me, prove it.”

Kieran comes over to Emma’s house, and the latter apologizes for freaking out about her boyfriend talking to the police about her.   Kieran accepts the apology, and tells Emma to stop hanging out with Eli.  “He’s not right,” he explains.

Meanwhile, Audrey gets a text from the killer with a video of Emma sleeping.  She gets a threatening call, and decides once and for all that she’s sick of these games.  She calls Emma and invites her to the carnival.

Emma accepts the invitation, and is really glad she did.  It’s been awhile since she and Audrey have hung out one-on-one.  The two are even having fun.

Backstage, Brooke and Zoe bond over makeup, dresses, and Zoe’s pink, shiny flask that she brought along to calm her nerves (she hates public speaking).  The two drink, and Noah arrives with a bouquet of cotton candy.  Zoe skips off with him to pass time before the pageant, leaving Brooke alone with the booze.  Stavo shows up and tries to entice Brooke into ditching the pageant all together.  Brooke doesn’t want to go.  Turns out, the pageant isn’t just for her dad; it’s for her.

Meanwhile, Emma and Audrey are amusing themselves with carnival games.  That is, until Eli approaches Emma.  He wants to know what Acosta told her about him.  Emma tells him that she knows about the restraining order, and Eli tries to brush it off as a mistake.  Emma doesn’t want to deal with this right now, and turns away to leave.  Eli grabs her arm, and Kieran swoops in, breaking them apart.  He warns his cousin to “stop telling stories” about him, and Eli says that he didn’t even tell Emma “the worst part” about him.  Kieran loses it, and attacks him.  Emma breaks it up and leads her boyfriend away.

While Noah and Zoe stroll around the fair grounds, without a care in the world, Emma tries calling Kieran again.  He left the carnival shortly after the fight with his cousin.  Emma tells Audrey about the restraining order, and in return, Audrey tells Emma about the messages written on her ceiling and mirror (she doesn’t tell Emma the whole story though…).  The two wonder if Eli is behind everything.

After Zoe wraps up her pageant speech, she goes backstage to find Brooke, who has polished off the flask.  Brooke is wasted, and she’s stumbling around, but she’s still functioning on a basic level.  She’s not even slurring her words, which is great, because it’s her turn to deliver a speech.  She goes onstage and calls out the entire town for their absurd carnival and denial that Lakewood is cursed.  She drops the mic and Noah, Audrey, and Emma leave to collect their friend.

Maggie has successfully identified the bodies.  She points out Branson’s missing hand to Acosta, and when she leaves, he pulls out one of Stavo’s drawings.  It features a man tied down to a bed.  Acosta sits down at his desk and tries to come to terms with the fact that his son might be a serial killer. Or just deeply emotionally disturbed.  Either way, it’s a lot for a parent to handle.

Back at the carnival, Noah, Audrey, Emma, and Zoe prove to be great friends by tending to Brooke.  They give her water and assure her that she totally didn’t make an ass of herself; if anything, she dropped a truth bomb that would wake the town up.  Mayor Maddox comes to take Brooke home, and Emma gets a text from Kieran, asking her to meet him by the ferris wheel to talk.  Emma leaves without telling her friends where she’s going, or even that she’s going.  Rude.

When Emma reaches the ferris wheel, she doesn’t see Kieran.  Instead, she gets another text, with a video of Kieran tied up and gagged in the funhouse.  Emma darts off to save him.

Audrey realizes, with horror, that she’s lost track of Emma, and goes to search for her.  She tries calling her, but then receives a video from the killer featuring Emma running into the funhouse.

Audrey must have alerted a police officer, because the next thing we know, a cop is walking through the funhouse, which may as well have been named “Hell” because it’s so creepy and disturbing.

The officer searches the funhouse, and is pushed through a mirror by the killer.  Emma stumbles upon his body while looking for Kieran and sees the killer standing in front of her.  She grabs the policeman’s gun, points, and shoots.  It would have been fatal, but she was only shooting at the reflection.

Acosta and his team surround the funhouse, firearms at the ready, demanding the killer to come out.  A man in a mask and robe does come out, but something’s a bit off.  His voice is muffled, and he can’t seem to drop the knife.  He does manage to get down on the ground so the squad doesn’t shoot him though.  Emma runs out, holding the stolen gun, and points it at the man.  She demands to know where Kieran is.  Acosta orders her to drop the weapon, and she does.  An officer grabs the masked man’s knife, and finds that it’s been duct taped to his hand.  She removes the mask and finds…Kieran.  He has duct tape over his mouth (hence the muffled voice) and is scared out of his wits.

Thankfully, Emma isn’t arrested for stealing a police officer’s gun, so she’s able to join Kieran in the ambulance after he’s treated for shock.  He tells her that he was in the car when his parents died.  He and his stepdad got in a fight during the drive, causing the latter to take his eyes off the road.  Kieran’s been living with the guilt for years.

Noah congratulates Zoe on winning the pageant, and the two go back to Noah’s house to have sex.  Except, they’re interrupted by Audrey.  Again.  It’s just a phone call, though, and Noah wants to ignore it and get down to business.  Zoe changes her mind and tells Noah that they should probably wait, and she goes home.

At the same time, Brooke is at her house, sleeping off her inebriation.  Suddenly,  a shadowy figure appears at her window.  The figure climbs in and approaches her bed.  Brooke turns around and…smiles.  It’s Stavo. Brooke invited him.

Audrey drives to Emma’s house to make her full confession.  When she goes upstairs to Emma’s room, she finds Emma listening to the audio recording of her first confession to Noah.