Get your nightlight ready. 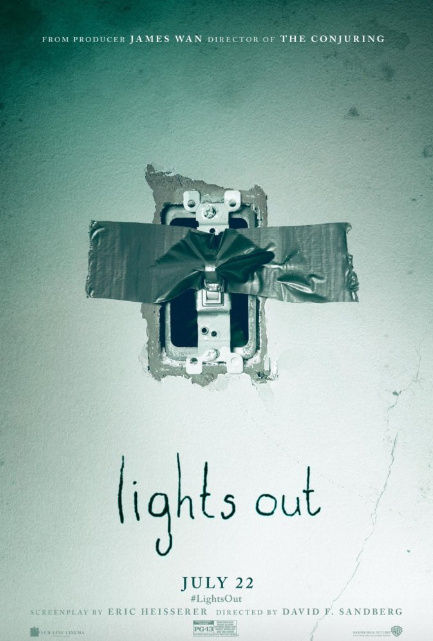 David F. Sandberg’s debut feature film Lights Out was unleashed this weekend, drawing crowds of horror fans, young and old.  Mostly young, since Lights Out was given a rating of PG-13.  But don’t let that fool you: Lights Out is as scary and disturbing as they come.

The film opens with an adaptation of the short film on which Lights Out was based.  A woman sees a silhouette in the dark that disappears when she turns on the light.  From there, the film spirals into a 81 minute fright-fest that will have you gripping the edge of your seat.

Lights Out tells the story of a family broken apart by tragedy and mental illness.  The protagonist, Rebecca, moved out of her mother Sophie’s house at a young age, and is now all but estranged from her and her little brother Martin.  When Rebecca was a child, her dad left Sophie and was never heard from again.  Shortly after, Rebecca began to experience a sinister presence in her home in the form of a violent, shadowy figure that only appears in the dark.  Her mother did nothing to help her.  As an adult, she struggles with commitment, to the chagrin of her boyfriend, Bret.

Rebecca is thrown for a loop when Martin begins to experience the same terror that she survived in the wake of his father’s death.  The shadowy figure is a creature named Diana, and Sophie has been trying to get Martin to accept her presence and keep the house in almost complete darkness to allow it free range.  Rebecca uncovers the truth about Diana and realizes that her presence is even more destructive than she thought.

The trailers for Lights Out suggest a ghost story.  The film, however, is much more complex.  In essence, Lights Out is about mental illness and how it destroys relationships, families, and ultimately, the people who suffer from it.  The film is also about toxic, abusive people and how they feed off of other’s despair.  The plot is excellent and unpredictable, and Sandberg cleverly uses Diana as a physical manifestation of Sophie’s mental illness, in the same vein as the monster in The Babadook.

The dialogue was interesting and clever, albeit slightly cliché at times.  Screenwriter Eric Heisserer, who cowrote the 2010 reboot of A Nightmare on Elm Street, gave each character a distinct voice and clearly defined motivations.

Expanding a short film into an feature isn’t an easy task.  With Lights Out, Sandberg proved that his talent isn’t limited to three-minute videos ending in jump scares.  He’s more than capable of providing that heart-pounding, white-knuckling tension that we crave (and yes, some well-executed jump scares as well).  He’s currently directing Annabelle 2, so we know we’ll be seeing more from him.