Got a summer internship that’s keeping you too busy to watch Scream? Take a break from that and read this recap: 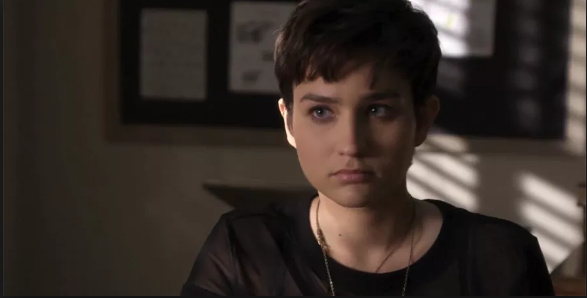 The episode opens with an autopsy performed by our very own Maggie Duvall.  She’s examining Piper Shaw’s corpse for a second time because someone dug her up and preserved her body.  In the chest cavity, Maggie finds that someone replaced Piper’s human heart with a pig heart.

At Audrey’s house, Emma does a little examination of her own.  She interrogates Audrey about her involvement with Piper.  Audrey swears that she didn’t think that Piper was the killer because the night Rachel died, Audrey was with her.  Audrey admits that she knew the whole time that Emma and Piper were half-sisters, and it’s heavily implied that Audrey and Piper had sex.  Emma still doesn’t trust Audrey and storms out of her room.

Speaking of sex, Noah calls Zoe after psych class– the latter is absent from school and Noah wants to know what’s going on with his kind-of girlfriend.  He gets a text from Zoe’s phone telling him that she needed a mental health day, and that she was at the lake.  Noah volunteers to skip the rest of the day and meet her there.

At the police precinct, Maggie and Acosta discuss the findings of the autopsy, and Acosta reveals that Stavo is missing.  He is of the opinion that the pig heart was placed inside Piper’s body for the two of them to find.  He thinks that Brandon James somehow survived the police shooting and is now out for revenge.  Maggie thinks that theory is ridiculous.  A flashback reveals that Acosta and Maggie were friends when they were teenagers…and that Brandon James did in fact survive the shooting.

Noah drives down to the lake and texts back and forth with Zoe.  She teases her whereabouts and instructs Noah to go into the wooded area by the lake.  Her texts reveal that she’s watching him, and she leads him further and further into the woods.  Noah gets nervous and stops walking, and then gets a call from Zoe’s phone.  It isn’t Zoe at all: it’s the killer.  They taunt Noah about the fact that he had sex and is now on the “slasher slab”.  They tell him that they have Zoe captive and Noah starts to look for her.  Suddenly, the killer appears and stabs Noah in the stomach.

At school, Emma and Audrey get a text from the killer– a livestream of Noah.  The killer calls them and tells them they have about five hours to find Noah.  Oh, and if they tell anyone, including the police, the killer will set Noah’s coffin on fire.  The two jump in Emma’s car to frantically brainstorm and receive another text from the killer.  This time it’s a clue: where did Noah go wrong in his obsession?

Meanwhile, Noah wakes up to discover that he’s been put in a coffin– and buried alive.  A video camera is mounted over his face, livestreaming his every move. Noah pound on the coffin’s roof to try to break himself free.  He’s no Beatrix Kiddo, though, so his plan doesn’t work.  He hears muffled screaming and vows to stay calm.

Back to the present.  Acosta revisits the farmhouse and decides to take a look around.  After inspecting the first floor, he hears noises coming from upstairs.  He ventures up to find…nothing.  Except for a hidden room and pictures of Emma and Maggie.

Audrey and Emma go to Noah’s house to look through his belongings for more clues.  On his bulletin board, Emma finds a note saying “What’s behind Noah’s obsession?” The note is written on the back of a letter Audrey had written to Piper, in which Audrey rants about how Emma got pretty, got new popular friends, and became a stuck-up bitch who Audrey wanted to “take down”.  Yikes.  In the wake of that, Emma has a eureka moment and realizes that the note might be literal.  She reaches behind the bulletin board and extracts a daffodil.

Six feet under, Noah begins to hallucinate.  He sees Zoe in the coffin with him.  He knows it’s not real, but he chooses to take comfort in the company.

On the road, Emma and Audrey are en route to a stable where they used to play together as kids.  The daffodil behind the bulletin board is representative of the daffodils that grow there.  The two know that the killer is screwing with their heads by twisting cherished childhood memories into something dark and horrible.  Emma ignores Kieran’s many phone calls and texts, and shows Audrey the letter she found in Noah’s room.  She’s hurt and angry that Audrey would say such horrible things about her, and confused because she doesn’t know what she did to make Audrey feel so hateful towards her.

In town, Acosta tells Maggie about his discovery at the farm.  He’s convinced that Brandon James is still alive, or if he’s not, then someone has been living in that house.  Maggie tells him that she might be able to determine whether or not Brandon is alive.

Noah talks to Hallucination Zoe, allowing “her” to calm him down.  She disappears shortly after, though, leaving Noah alone and screaming in his coffin.

Emma and Audrey arrive at the stable.  During their walk across the field to get inside, Audrey tells Emma that she thinks the killer must have been working with Piper from the beginning.  Audrey had told Piper that she and Emma used to play there, and that Audrey just thought that Piper was curious about her sister.

At the precinct, Acosta gets a call from the killer with an anonymous tip about suspicious activity in the abandoned stables by Route Six.  The killer tells Acosta about screams coming from the area, and that he should go investigate.

The stable door is decorated with scythe.  Audrey and Emma remove it and venture inside.  They find a gutted and decomposing pig and start to look around for more clues, including disturbed dirt where Noah might be buried.  Emma asks Audrey, again, what she did to make her so angry, and Audrey confesses that she had been in love with Emma, and felt that Emma had abandoned her to hang out with the popular crowd.  They hear Noah’s voice coming from beneath the pig.  They drag it away and start digging.  They find Noah’s coffin fairly quickly and they manage to get him out.  He tells them that Zoe is still buried.   They hear her screaming.  Audrey and Emma lift away Noah’s coffin to reveal a small box underneath it. Inside the box is a phone with a livestream of Zoe.

Audrey and Emma help Noah stumble to the car (remember, he was stabbed), and the three realize that Zoe is wearing her Lady of the Lake sash and her coffin is filling with water– she’s buried somewhere by the lake.  In the car, Emma and Audrey try to convince Noah to let them take him to a hospital to get treated for his wound. He refuses: his focus is on saving Zoe.

Meanwhile, Acosta arrives at the stable to discover an empty coffin and a trail of blood.

At the lake, the three see a coffin by the waters edge.  They pull it to shore and pry it open to reveal Zoe’s cold and lifeless body.  The “livestream” wasn’t a livestream at all; just a recording of Zoe’s final moments.

The police swarm the stable to take crime scene photos.  Someone (the killer, probably) had strung up the dead pig and included a severed hand (probably belonging to Branson) to complete the picture.  Maggie tries repeatedly to get hold of Emma, but she’s not answering the phone.  Acosta gets a call from one of his other police squads, and informs Maggie that Emma is at the lake.  There, Zoe’s body is bagged and Noah is carted away in an ambulance.  Emma holds Audrey’s hand, ready to put their past behind them.

At Emma’s house, Maggie comforts her daughter and assures her that Zoe’s death isn’t her fault.  A flashback shows Brandon James leaving Maggie a note saying “don’t forget me” in a knot in a tree by her house (like Boo Radley).  That night, Maggie goes to the tree and leaves a note of her own, saying “leave her alone.” As Maggie walks away, Eli the Creep emerges from the bushes from where he was watching her.