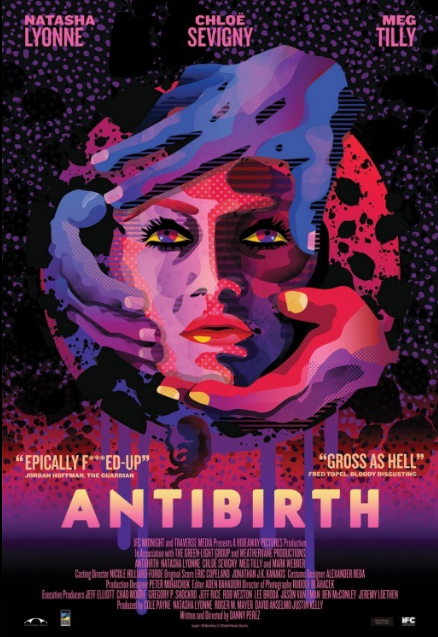 There are tons of movies out there about freewheeling, irresponsible people who face unplanned pregnancies.  There are also quite a few films in the horror and science fiction genres about pregnancy as a result of some kind of divine intervention and/or alien abduction.  Danny Perez’s new horror film Antibirth tackles the Mystical Pregnancy trope and amps it up to the next level.

Hard-drinking, pill-popping, bong-ripping Lou (Natasha Lyonne) and her best friend Sadie (Chloë Sevigny) spend their days adrift in a druggy haze. But one wild night out becomes a bad trip that never ends when Lou wakes up with symptoms of an unexplained, highly abnormal pregnancy. Who—or what—is growing inside her? As her due date approaches with alarming swiftness, the fear, paranoia, and conspiracy theories begin to pile up. Spiked with blasts of hallucinatory color, surreal shocks, and subversive comedy, the audacious feature debut from Danny Perez is a no-holds-barred descent into delirium.

Antibirth has already garnered rave reviews and has been dubbed “the nasty, punk rock step-child to the best of William Friedkin” by John Fink of The Film Stage.  The trailer is out and promises all the chaos, mania, and trippy images you could possibly want in a single horror movie.

The due date for Antibirth is September 2nd (Video on Demand and limited theaters).  Check out the trailer below!