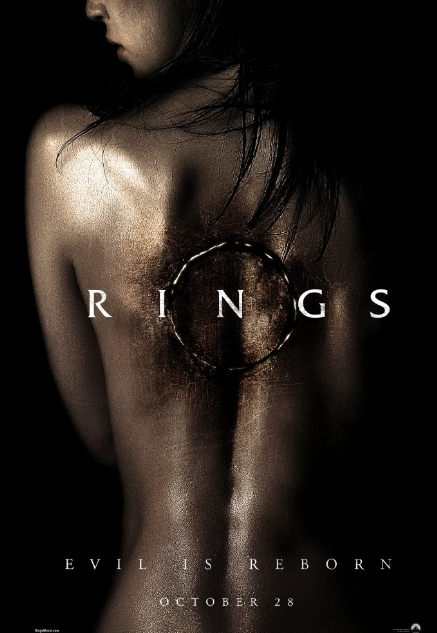 This week, the horror world was rocked with a revival of the popular 2002 film The Ring.  The new film, titled Rings, is a sequel to the original two films, despite early rumors that it was going to be a prequel, and was directed by F. Javier Gutiérrez.

The trailer for Rings was released, garnering mixed responses from devoted horror fans and purists.  Some commented on Internet forums with unbridled enthusiasm and excitement for a third installment of their favorite childhood horror film.  Others were less than thrilled.

Rings, written by Jacob Estes, Akiva Goldsman, and David Loucka, brings Samara into the digital age of 2016.  Instead of a cursed video tape, her haunted film is distributed through the Internet– a viral video, if you will.

Julia becomes worried about her boyfriend, Holt, when he explores the dark urban legend of a mysterious videotape said to kill the watcher seven days after viewing. She sacrifices herself to save her boyfriend and in doing so makes a horrifying discovery: there is a “movie within the movie” that no one has ever seen before.

The synopsis looks interesting on paper, but the trailer is another story.  In two and a half minutes, the trailer for Rings shows us a snippet of Samara’s video, disturbing body horror-esque images, and mass panic.  None of these elements are necessarily bad to have in horror movies, but in this trailer, they just seem loud and portray Rings as a horror-by-numbers movie.

Which would completely betray the original films.

Part of what made The Ring and The Ring Two so terrifying was the consistently muted tone in which the inventive and unpredictable story was told.  Everything, right down to the cinematography, was expertly downplayed, leading to some amazing jump scares and truly horrifying sequences.

From the trailer, we can see that Rings is going to be the exact opposite: the stylized blue-tinted cinematography of The Ring has been replaced with a more natural color scheme.  The intimacy of a story focusing solely on four people has been rejected in favor of a scene with a plane crash.  And, although this can only be verified when the film is released, the smart and resourceful female protagonist of The Ring seems to have been watered down into a generic Final Girl.

There is, of course, the possibility that the trailer is simply poorly made, and that Rings will blow us all out of the water.  We’ll know for sure when the film is released on October 28th.  For now, check out the trailer and let us know what you think.