If you somehow missed the premiere of the sixth season of American Horror Story, I got good news and better news: this season is taking the show in a totally different and seriously awesome direction, and we have a recap of everything you missed: 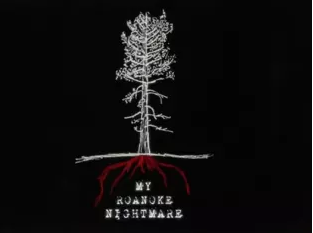 The episode opens with the docu-series “My Roanoke Horror.”  It’s in the vein of shows like “Paranormal Witness” and “I Didn’t Know I Was Pregnant”: the “real people” sit in a plain, black room and tell their tales of horror to the audience while “actors” perform a dramatic reenactment.

This episode of “My Roanoke Horror” tells the story of Shelby (played by Lily Rabe and Sarah Paulson) and Matt (played by André Holland and Cuba Gooding Jr.)– a married couple and deeply in love with each other.  At the beginning of their relationship, Shelby, a yoga instructor, and Matt, a traveling salesman, are living in Los Angeles.  After Matt is attacked as part of a gang initiation and Shelby has a miscarriage due to the resulting stress, the two decide to move to the rural South East.

They discover an old farmhouse and win it in an auction, outbidding the Polk family (played by Chaz Bono, Grady Lee Richmond, and Orson Chaplin), who reacts unfavorably.  As soon as they move in, Shelby begins to feel uneasy about her new living arrangements.  She hears strange noises, and sees shadows out of the corners of her eyes.   One night, she and Matt are woken by an unnatural and vaguely animalistic noise.  Matt goes to investigate, and finds that their garbage cans have been upturned, and the contents scattered.  At first, Matt suspects wild animals– they are in a rural area after all.  But then, a piece of garbage flies at him, and he jumps to the conclusion that the Polks are trying to get them to leave.  Matt thinks it may be because he and Shelby are an interracial couple.  During a hailstorm, Shelby sees the hail as human teeth falling from the sky.

When Matt is away for business, Shelby sees a brief apparition of two women in the house.  When she brushes the vision off as a figment of her imagination, she takes a dip in their hot tub.  She relaxes with a glass of wine, floats in the water, and enjoys the silence– until something grabs her and holds her under the water.  From beneath the surface, she sees a group of people holding torches

When Shelby is let go, she calls the police and Matt.  When Matt arrives, the police behave condescendingly and make it obvious that they don’t believe her story– there isn’t any evidence of intruders.  The next day, Matt discovers that someone has left a slaughtered pig in their house.  He doesn’t tell Shelby, instead choosing to simply bury it on the property.  He then installs security cameras that send live feeds to his phone.

Since Matt has to go on another business trip, he enlists his sister, Lee (played by Adina Porter and Angela Bassett), to stay with Shelby.  Lee is a former police officer who became addicted to painkillers after she was injured at work.  After her addiction was revealed to her superiors, she was fired and her husband divorced her, winning full custody of her daughter.  Now clean and sober, Lee agrees to stay with Shelby, even though she thinks that she’s totally wrong for her brother.

When Shelby is cooking dinner, she hears a noise in the house and moves out of the kitchen to investigate.  When she returns, she discovers that her knife is not on the counter where she left it– someone stuck it into the meat cooking on the stove.  Shelby thinks that it was Lee playing a trick. Before she can confront her about it, Lee asks her to not drink while she’s in the house.  She’s hanging onto her sobriety by the skin of her teeth.

Later, when Lee is alone in the hallway, an empty bottle of wine rolls toward her.  Angry, Lee confronts Shelby– she thinks that it was her.  The two women argue and old issues are rehashed, when suddenly, they hear footsteps and movement in the house.  They follow the noise to the basement, where a homemade video featuring a pig is playing.  The lights go out and the basement door is locked, trapping them.  When they escape, they find that someone has strung up a web of string and stick dolls in the house.  Meanwhile, Matt gets an alert from the security cameras on his phone– a torch wielding crowd is entering the home.

When Matt arrives, he find Shelby and Lee alone in the house.  They show him the video, which only convinces him further that the Polks are trying to scare them into moving away so that they can buy the house.  Shelby is sufficiently frightened and drives away.

On the road, she hits a woman (played by Kathy Bates) with her car.  The woman gets up and walks off the road and into the woods.  Shelby follows her, frantically trying to find her so that she can take her to the hospital.  Shelby gets lost in the woods and discovers more of the stick dolls strung up in the trees.  She trips and falls to the ground, which is pulsing as if it’s breathing.  When she’s able to get up, she comes face to face with a torch-wielding crowd and…a man who has just been scalped.