A female drives a van through the roads and streets of Scotland seducing lonely men. 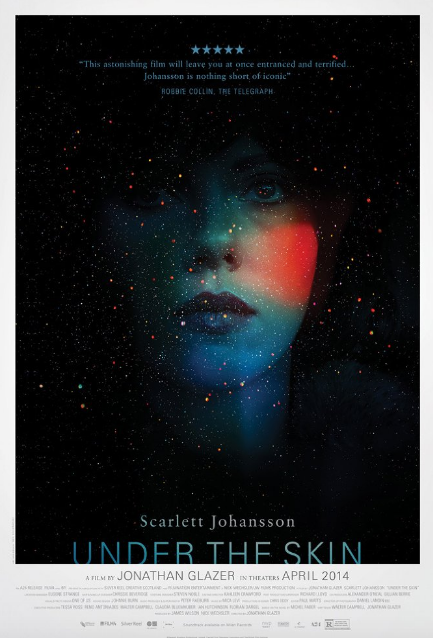 It’s the second day of our Halloween Countdown! Yesterday, we featured the dancing zombies of We Together.  Today, we’re taking you on a journey to a foreign planet.  It’s loud, crowded, and the inhabitants have strange social customs.  It’s the third planet from the sun and there, you’re either the predator…or the prey.

Okay, so we’re not exactly traveling to a distant planet. We’re already on it.  But in Jonathan Glazer’s 2013 feature film Under The Skin, we’re forced to see Earth from the perspective of an alien (played by Scarlett Johansson) who arrives with some questionable goals.

The alien bears the appearance of a beautiful woman and spends its days driving a van around Scotland.  Employing its alluring appearance, the alien is able to pick up men and lead them to their ultimate demise.

Under The Skin is one of those science fiction-horror blends that works on both a visual and intellectual plane.  The fate of the male victims is horrifying and grim, and the ultimate fate of the alien is equally terrifying.  The film successfully keeps its audience on their toes and maintains a steady level of tension, mystery, and horror.

Co-written by Glazer and Walter Campbell, Under The Skin was loosely based upon Michel Faber’s novel of the same name.  Both the film and book explore misogyny, sexuality, the male gaze, and sexual assault.  The film, especially, can be viewed as a 108-minute examination of the Femme Fatale trope.

Under The Skin is available on Amazon Video, and probably thirty other places on the Internet.  Watch the trailer below!