Last night’s American Horror Story: Roanoke was a rollercoaster from start to finish.  Strap in, kiddos. 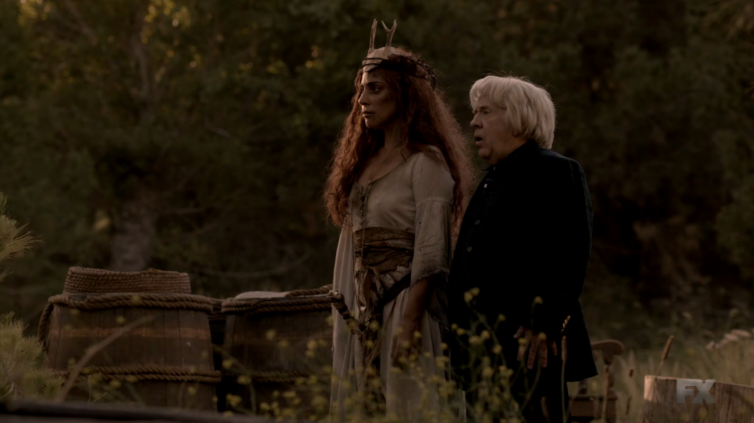 The opening of the episode finds Shelby and Matt at odds.  Shelby is furious with her husband for not only cheating on her, but for agreeing to burn down their house to appease The Butcher.  Matt defends the verbal contract.  His niece’s life is on the line after all.  As for the adultery…Matt has absolutely no memory of it.  He doesn’t even remember leaving the meeting with The Butcher.  He has a panic attack because of the memory loss, which convinces Shelby that he’s not totally full of it.

Later that night, Shelby leaves Matt’s side to take a shower, and is faced with our worst fear: behind the shower curtain is a demonic pig-man, who attacks her with a knife.  She’s able to get away from him/it, and Matt is even able to get some punches in.  But the pig-man disappears when Elias Cunningham (from the found video tape) appears and says the magic word: “Croatoan.”

Elias explains that while the spirits may appear year-round, they turn lethal during the blood moon– which is now.  He shares some more of the house’s history.  Every owner has either died or gone missing.  Not great for real estate, which is why Elias wasn’t able to sell the house– the bank took it when he couldn’t pay the property tax.  And those nurses who used the house as a murder site? They were ripped apart– literally– by The Butcher and her cronies.

During her interview, Shelby admits that she called the police and told them that she suspected Lee of murdering her ex-husband.  Matt realizes that the only way to save her is to locate Flora, so he, Shelby, and Elias go out into the woods to look for her.  Lo and behold, they do find her– the forest witch-spirit that Matt had sex with leads them to her after they catch a glimpse of her.  Flora is playing with the Witch,  the Pig-Man, and some spirits, including the nurses, a family who was murdered in the house, and Priscilla, who as it turns out, has met Elias before.  Elias calls out to her and tries to tell her to let Flora go, but a horn sounds and Elias is struck with a few arrows, killing him.

Shelby and Matt run back to the house to find Cricket, who asks if they’re ready to use his method of retrieving Flora.  He tells them that The Butcher is no longer in the mood to negotiate…and that he needs to find her to try again.  He returns hours later with more information about The Butcher and the land the house was built upon.  He didn’t meet with The Butcher though– he met the Witch.  Her powers have been strengthening for centuries.  So have her carnal desires, so Cricket offered up Matt in exchange for her help.  And also so she wouldn’t kill him.

We then get some more backstory.  The land that Shelby and Matt are living on was where the Roanoke settlers moved.  It was essentially the Garden of Eden, but required human sacrifice to keep it going.  Priscilla was sacrificed by The Butcher.  A mutiny led by The Butcher’s son occurred– apparently no one was happy with the shift from Christianity to Paganism.  The Witch encouraged The Butcher to kill and enslave her naysayers’ souls.  Which she happily did.  Using their blood, The Butcher anchors the entire colony to the land.

Cricket tells Shelby and Matt that he knows of a spell that would get rid of The Butcher and her army for good.  He calls for an Uber to pick up some supplies that he has in his hotel room– sacred herbs, his grimoire, and sage (of course).  While Cricket is in the Uber, Flora runs out in front of the car.  The driver stops short and Cricket goes after her.

Back at the house, Matt and Shelby are worried sick.  While Shelby sleeps, Matt hears noises outside and in the house.  He goes to investigate and finds the Witch in the cellar.  She coercively seduces him and tells him her story.  She was born and raised in England and was the descendant of Druids.  She came to the New World as a stowaway.  When the sailors and soldiers on the ship discovered her hiding within the cargo hold, they blamed her for the treacherous journey– it was considered bad luck to have a woman on board.  They sentenced her to burn at the stake for witchcraft.  The old gods of the New World saved her, and she absorbed more magic.  Now, she’s almost a goddess herself.

Shelby wakes up to discover the horde of spirits marching up to the house, Flora in tow.  She calls for Matt, and he breaks away from the Witch.  The Butcher makes a move to sacrifice Flora, but Priscilla saves her.  Flora runs to her aunt and uncle, who bring her inside.  She’s traumatized, but otherwise unhurt.  She tells Shelby and Matt that the spirits have captured Cricket.

Matt and Shelby run to the window and watch helplessly as The Butcher disembowels Cricket.  As in, stabs him in the stomach and removes his intestines while he’s still alive. 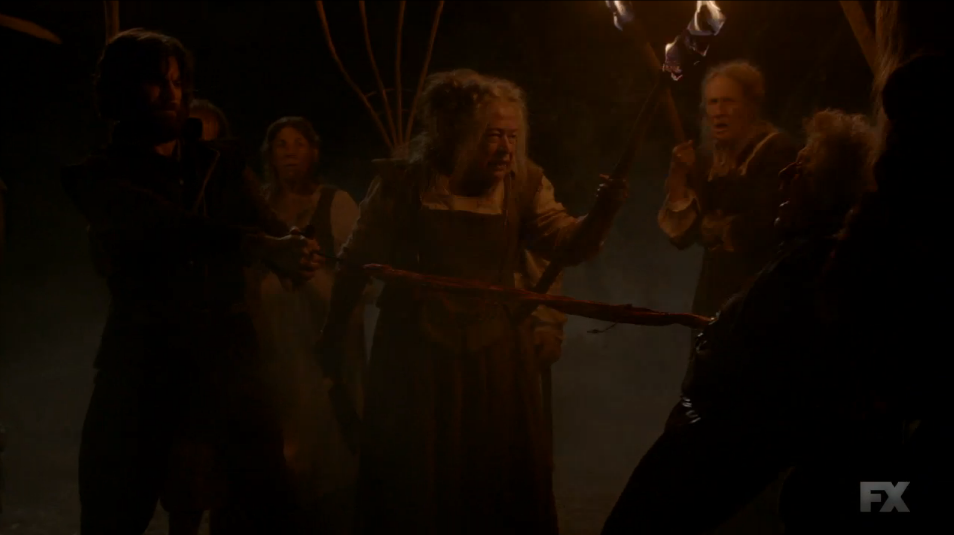