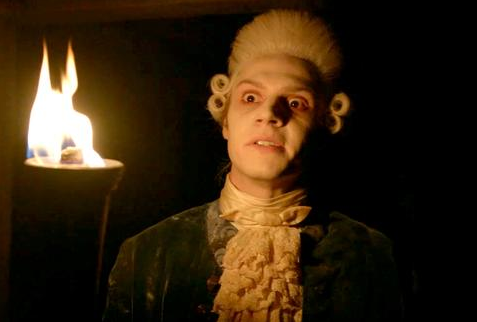 The episode opens with an interview with a historian, who tells us how the house came to be.  The land was purchased by Edward Philippe Mott in the 1700s.  Fabulously wealthy and fabulously unhinged, he relocated to North Carolina from Philadelphia after leaving his wife and children for his slave-slash-lover, Guinness.  A lover of art, Edward filled his new home with his collection.  During the construction of the house, a builder fell two stories and badly broke his leg, most likely due to the Roanoke Settlers’ spirits.  There were also reports of “strange occurrences” in the house.

One night, Edward awoke to find that someone had stuck a meat cleaver in the wall next to his bed, and destroyed his art collection.  Furious, he blamed his slaves.  They told him that they saw a white woman and a white man destroy the art, but Edward didn’t believe them.  He locked them all in the root cellar as a collective punishment, angering Guinness.

Later that night, Edward was dragged from his bed by the spirits and taken outside to meet The Butcher.  The spirits impale Edward and burn him alive to consecrate the land.  Guinness was wrongfully jailed for the murder and the slaves died in the root cellar.  The house stayed in the Mott family name until the line ended in disgrace– with Dandy Mott (from AHS: Freakshow).

Back to the main narrative.  Matt, Shelby, and Flora are still hiding in the house, away from the angry mob of spirits outside.  Matt calls 911 in a desperate attempt to get help.  He tells Shelby to take Flora and run to the car to escape.  As they make their way down the stairs, a spirit (one of the previous owners of the house) grabs Flora and scuttles away with her.  They find Flora after a moment.  She has a bruise on her arm and is frightened, but is otherwise okay.

Until the Pig Man shows up.

The three run to the basement and lock the door, trapping themselves down there.  They realize that the previous owners are all too terrified of The Butcher to stand up to her.  In the basement, Edward appears.  He leads them to an underground tunnel that he built, and helps them escape.  The help isn’t exactly altruistic– Edward just wants some peace and quiet and doesn’t want to deal with three more ghosts in his house.  He leads them into the woods and retreats back to the house.  Suddenly, bags are thrown over their heads.

They are taken to the Polk’s farmhouse.  Elias is there.  He’s still alive, but he’s missing an arm and a leg.  It appears that the Polks had amputated the limbs.  He begs Matt to kill him.

The matriarch of the family, Mama Polk, arrives.  She offers some meat to Flora and Shelby, who refuse it.  Mama Polk is insulted and eats it to show them that isn’t poisoned.  She promptly spits it out and complains to her sons that it doesn’t taste right.  It’s then revealed that the Polks have been cannibalizing Elias.  One of her sons, Lot, bashes Elias’ face in, killing him.  Mama Polk tells Shelby and Matt that they’ve been letting The Butcher consecrate the land every year in exchange for safety, and that sometimes they provide the human sacrifice.

Remember Lee? She’s still being questioned by the police about her ex-husband’s murder.  She maintains that she doesn’t know anything about the killing and tries to convince them that she’s not lying.  She quotes Mark Twain: “If you tell the truth, you don’t have to remember anything.”

Meanwhile, the Polks load Shelby, Matt, and Flora in their pickup truck and drive.  Lot aims a shotgun at the family to discourage any escape attempts.  Matt is desperate though, so he grabs the gun, wrestles with it with Lot, and shoots the driver, blowing his brains out.  Flora, Matt, and Shelby escape to the woods. When Lee is released from police custody, she calls Matt’s cell phone.  The noise from the vibrations reveals their location, and the Polks recapture them.

Rather than killing them, Mama Polk smashed Shelby’s ankle with a sledgehammer.  The Polks then drive the three back to the house and back to the mob of ghosts who want to sacrifice them.

The ghosts grab Flora to kill her first. Priscilla is upset– The Butcher promised her that Flora would be the last to be killed.

A police officer drops Lee off and quickly drives away.

Right when The Butcher is about to kill Flora, her son Ambrose stops her and pushes her into the bonfire, saving Flora.  Edward then appears and cuts the ropes around Shelby and Matt’s wrists.  Lee drives up in her car and takes them all away.

In her interview, Shelby tells the end of her family’s story.  They had enough cash with them for a motel room and takeout.  Shelby got her ankle treated at a hospital, and her sister wired them enough money to take her and Matt back to Los Angeles.  Aside from the PTSD, the nightmare was over.