Too busy to watch this week’s American Horror Story: Roanoke? We got you covered: 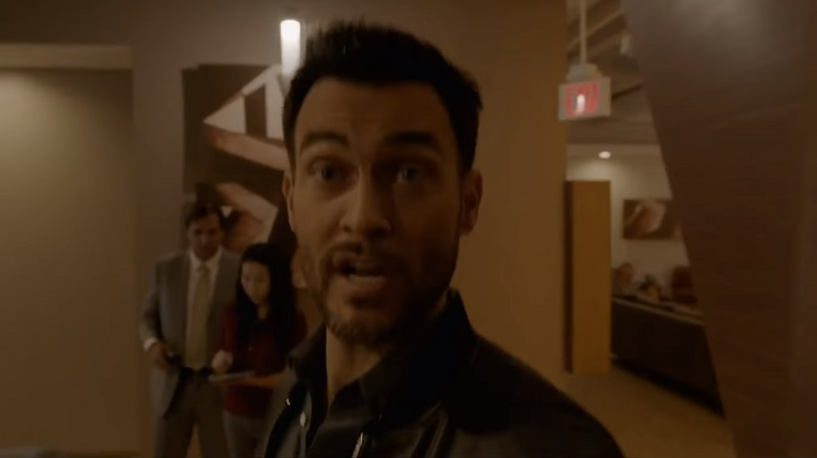 The docuseries My Roanoke Nightmare got rave reviews and amazing critical reception since it aired.  Now, series creator Sidney has orchestrated a follow up special called Return To Roanoke: 3 Days in Hell.  A camera crew follows Sidney and his assistant Diana as they square away the final details for the show.  Sidney reveals the premise in a board meeting: Shelby, Matt, and Lee will be sequestered in the Roanoke house for the three-day Blood Moon period with the actors that played them in the docuseries’ reenactment scenes.  Everyone will be filmed 24/7.  And there will be planted and timed scares to elicit reactions from the subjects.  It’s a “reality” show.  It’s also revealed that Sidney had bought the house from Matt to film the docuseries.

Diana tells Sidney that Shelby wants to speak to him regarding the show.  She may be thinking of backing out. In an interview, Shelby reveals that she’s been getting death threats since the docuseries aired.  She and Matt have also separated.  Their marriage had been on the rocks since they experienced the terror in the house.  The final nail in the coffin was a brief fling that Shelby had with the actor who played Matt in the docuseries– Dominic.  Shelby tells Sidney that she wants to do the follow-up show for the sole purpose of getting Matt to speak to her again.  Her one condition before signing the final contract is that Dominic will not be joining them.  Later in the car, Sidney and Diana confirm that Dominic has signed the necessary paperwork and will absolutely be participating in the follow-up.

In the house, Sidney and his crew test out the practical jump scare effects.  Glass shatters and drawers spring out– great haunted house stuff to spook their subjects.  Sidney reveals that his goal is to get Lee to confess to murdering Mason.  The day on set takes a sick turn when Sidney and Diana find a bunch of bloody fetal pigs in the yard.  Diana wonders if the Polks could have had anything to do with it; Sidney tells her that no one has seen the Polk family in weeks.

We cut to an interview with Agnes Mary Winstead– the actor who played The Butcher.  She says that she absolutely loved playing her and was passionate about doing the character justice.  She even goes as far to say that their are two great roles for women in the Western Canon: Mary Tyrone (from A Long Day’s Journey Into Night) and The Butcher.  Sidney asks her about a mental breakdown she suffered after filming the docuseries.  Footage shows that she went on a rampage in Hollywood, in character, wearing her Butcher costume, and waving around a cleaver.  It is revealed that Agnes has since been diagnosed with schizoaffective disorder.  She insists that she’s now on medication and is completely fine.  Sidney confronts her about the fetal pigs, and a police officer arrives to deliver a restraining order: Agnes has been booted from the show and is not to come within 500 feet of the house.  She is visibly upset at this news and slips back into character, yelling after Sidney and Diana in the accent and dialect she used when she played The Butcher.

Another interview, airing on E!, reveals that Lee has agreed to the follow-up to clear her name.  Strangers have been calling her a murderer and her mother-in-law is suing for custody of Flora.  Sidney is concerned that she will snap and kill someone else.  It’s also mentioned that the actor who played Lee in the docuseries, Monet, has been in and out of treatment for alcoholism.

Sidney and Diana drive back to the set to discover a huge problem: a crew member has died.  His death was caught on camera.  He was using a chainsaw, which randomly sprung up and cut his throat.  Sidney wants to stay on schedule and is disturbingly apathetic about the death.  Diana tells him that something seriously wrong is ging on in the house.  She angrily quits and drives off.  In the car, she records herself giving a testimonial.  She’s convinced that the house is cursed.  She stops her car and turns her camera around to reveal a woman in the middle of the road.  She turns the camera around again and says that she’s absolutely not going to investigate.  Suddenly, the Pig Man appears behind her.  He attacks.  A title card reveals that police found this footage, and that her body remains missing.

In the house, a confessional is set up.  Audrey, who played Shelby, smiles and talks to the camera.  Turns out she’s British.  A blooper reel shows her tripping in a tunnel during the scene with Edward Mott.  The footage also shows Edward, or rather the actor playing him, asking her out on a date.  The actor, Rory, bursts into the confessional, and the two happily tell us that they got married.  In their bedroom, Rory gets a call from his agent telling him to come back to LA for a screen test.  As the two walk around the house trying to figure out a way to tell Sidney that he needs to be let out of his contract, Rory sees a shadow outside.  Suddenly, Agnes appears, breaking the window.  She’s been stalking and tormenting Audrey since they filmed My Roanoke Nightmare.  Audrey doesn’t want to stay in the house since Agnes knows where to find her.

Later, Shelby, Matt, Lee, and Monet arrive.  All of the participants congregate in the living room, where Sidney gives them disabled iPhones to record themselves.  Shelby tries to talk to Matt, but Lee verbally attacks her for bringing their family down.  Audrey, Rory, and Monet have a private laugh about how “pathetic” Shelby is and how perfectly Audrey played her.

Later in the kitchen, the actors talk about how ridiculous Matt and Shelby’s story is.  Matt comes in and tells them that the Blood Moon is coming.  The actors laugh it off.  A title card is shown:

Over the next three days during the Blood Moon, every participant in this series died under mysterious circumstances.  Except for one.

That night, they all go their separate ways in the house.  Rory and Audrey get down and dirty in the hot tub.  Audrey leaves to get in the shower shortly after. Monet pours herself a glass of the vodka she snuck in.  Shelby sneaks off to the basement to talk to Matt.  One of the cameras pick up the ghost of a badly burned man (presumable Mason) following Lee for a moment.  Matt voices his concerns about staying in the house.  He doesn’t think they will survive.

Lee tries to talk to Monet about their shared alcoholism.  Monet blames Lee for her addiction and accuses her of killing Mason.  Lee maintains that she didn’t, and is upset that Monet characterized her that way in the docuseries.

There’s a knock at the door.  Dominic has arrived.   Matt attacks him, and the others break them apart.  In the bathroom, Audrey sees the shadow of the Pig Man in the mirror.  She runs out screaming.  They all think that Sidney planted a scare actor in the house.  Rory runs upstairs, ready to beat the hell out of whoever scared his wife.  He doesn’t find anyone.  But the nurses find him.  They stab him to death in the bedroom.

Matt sees the word MURDER written on the wall.  He takes a picture before rejoining his new cast-mates.