Didn’t catch the last episode of American Horror Story: Roanoke? Lucky for you, we did.  Here’s the recap: 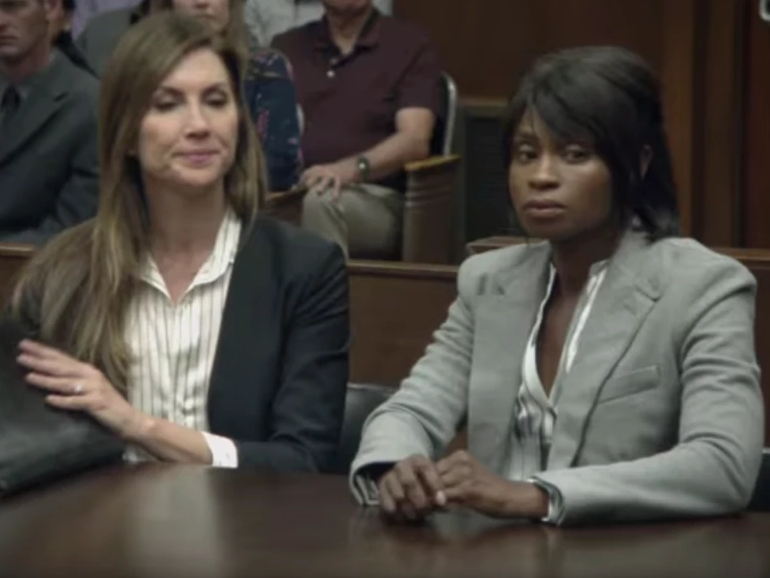 The season finale of American Horror Story: Roanoke was told in seven parts.  Part one was a clip of a Paleyfest panel.  The main cast of My Roanoke Nightmare: Season One and their real-life counterparts are shown answering questions from their many fans, signing autographs, and posing for pictures.  One fan even presents Lee with an original drawing of her and Flora.

Fast forward to post-Season Two.  The artistic fan releases a video on her Youtube channel, in which she criticizes the second season of My Roanoke Nightmare for being exploitative.  Also on Youtube, Lot Polk, the surviving member of the clan, condemns Lee for killing his family.  He swears revenge.

We cut to an E! True Hollywood Story– type program– Crack’d.  This episode is a special about Lee, and details her marriage, her daughter, and the murder of her ex-husband Mason.  Footage of her killing the Polks is shown, as well as footage of the subsequent murder trial.  Interviews with the DA and the jury reveal that the Polk’s marijuana had hallucinogenic properties.  The jury finds Lee not guilty by reason of diminished capacity.  Soon after, the DA prosecutes her for the murder of Mason– the tape in which she confesses to the slaying is shown.  At her trial, Flora is put on the witness stand.  She testifies that while she was hiding in the woods, she saw her parents fighting, and then watched as her mother bashed in her father’s head with a rock.  Flora tells Lee’s attorney, and the court, that she was with Priscilla– the ghost.  The attorney says that Flora is traumatized and has created false memories.  Once again, Lee is acquitted.

Remember the journalist Lana Winters from American Horror Story: Asylum? She’s come out of retirement to interview Lee in a live and unfiltered TV special.  In the interview, Lee states that she hopes to repair her relationship with her daughter.  Lana tells her that Flora was reported missing an hour ago, and accuses Lee of kidnapping her.  As Lee jumps up to leave the set, Lot Polk bursts in with a gun, raving about avenging his murdered family.  Lana tries to reason with him, but he knocks her out.  He is shot to death by security before he can kill Lee.

We immediately turn to another show: Spirit Chasers.  Hosts Bob and Dave tell us that they are unlawfully entering the Roanoke house during a Blood Moon to capture video evidence of any ghostly presence.  They are joined by Tracy, their tech manager, and the actor who played Cricket Marlow in My Roanoke Nightmare, Ashley.  Infrared cameras are set up, and the four start to poke around.  They immediately experience doors slamming and curtains rustling.  Ashley finds Priscilla’s bonnet on the floor.  Then, Lee makes an appearance.  She’s in the house looking for Flora, and she’s livid that the crew is stupid enough to be there during the Blood Moon.  A thermal image of a ghost is captured and audio of Priscilla is recorded.  The Piggy Man arrives and kills Ashley, and a ghost drags Bob away.   Dave sees The Nurses, prompting him and Tracy to run out.  Outside, Tracy is killed by The Butcher.  Two police officers arrive.  They, and Dave, are shot to death with arrows.

In the house, Lee finds Flora.

A breaking news story shows squad cars surrounding the house.  The news anchors tell us that Lee is holding Flora hostage in the house.  Lana Winters, who is recovering from Lot Polk’s attack, is interviewed.  She says that Lee’s goal has always been Flora.

In the house, we see Lee looking out the window and speaking to Flora, who is drawing pictures of herself with Priscilla.  Lee tells her that she killed Mason because he was going to take her away, and that girls need their mothers.  Lee apologizes and tells Flora that she is devoted to her.  She tries to convince Flora to walk out of the house with her, but she refuses.  She wants to be with Priscilla forever to protect her from The Butcher.  She says that she wants one of the ghosts to kill her.  Obviously Lee is horrified.  She makes her an offer: she will be killed by a ghost instead and protect Priscilla so that Flora can live her life.  Flora asks Priscilla, who has appeared behind Lee, what she thinks of the plan.

We then see the Roanoke house going up in flames.  Flora walks out unscathed and is taken away by EMS.  We see Priscilla kill Lee.  The two walk out of the burning house to wave goodbye to Flora one last time.

Tune in next year for our recaps of American Horror Story!